ACROSS THE PACIFIC - FILMSTRUCK 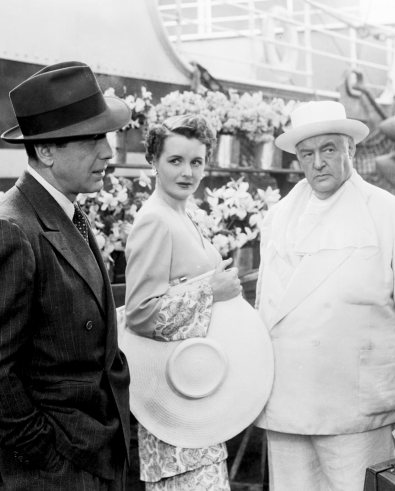 This 1942 film is notable as a follow-up of sorts to The Maltese Falcon [review]. Directed by John Huston, Across the Pacific reunites Bogart with Mary Astor and Sydney Greenstreet in an espionage story set just before WWII. Bogart is Rick, a disgraced soldier who falls in with a bad crowd on a Japanese freighter heading down to the Panama Canal. Greenstreet plays Lorenz, a cold businessman who is looking to make a killing in the Philippines and claims he is against a war with Japan because it will hurt his profit line. The closer they get to the Canal, however, the more Lorenz reveals. He's got something else cooking, and he's willing to pay handsomely for Rick's knowledge of the Canal. To complicate matters is the romance between Rick and Alberta (Astor), who claims to be a hayseed from Canada but may have a backstory that goes deeper. Which, really, they all do--Rick is running a game, too, but he's on the side of the good guys. 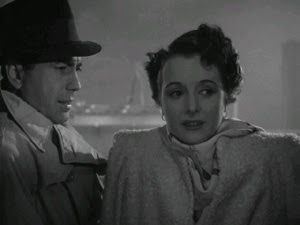 Across the Pacific is one of Hollywood's most straightforward war efforts, tickling paranoia about spies hiding among us. Its climax is set the day before Pearl Harbor, and in a weird case of clairvoyance, the original screenplay by Richard Macaulay (from a magazine serial by Robert Carson) initially hinged on the Japense attacking that very spot in Hawaii. When the tragedy really did happen, the script was retooled to climax in a Japanese plot against the Panama Canal, which is something that Bogart could actually be shown stopping. Lorenz and his undercover cronies were hoping to catch America with their pants down, but at least in this pocket of the fictional universe, that wasn't going to happen. Bogart and Astor have more fun in their romantic subplot than in The Maltese Falcon, giving their on-ship banter a sillier spin. Rick's jib is cut similar to Sam Spade's in that much of his swagger swings on him fostering an illusion of self-centered ambivalence. When the chips fall, however, Rick is allowed to be more of a hero, busting heads in the jungle and commandeering a machine gun. Some of the action is a little clunky, possibly down to John Huston leaving before shooting finished to join the war effort (Vincent Sherman took over), but the trio of great actors makes Across the Pacific more than worthwhile. 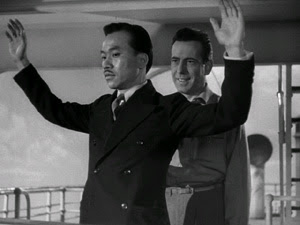