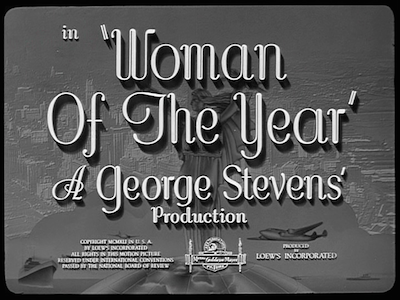 Of classic Hollywood couples who simulated their real-life relationships on the silver screen, Katharine Hepburn and Spencer Tracy are the ones who most successfully created films that put them together as the sort of couple most of us imagined them to be. As much as I love Humphrey Bogart and Lauren Bacall, even the most fanciful of fans would find it a stretch to believe their steamy personas from crime dramas translated to the everyday. Whereas Tracy’s lovable grumpiness and Hepburn’s intellectual charm was part and parcel to their image, their personalities turned into brands, both separate and as a team, and it’s easy to see the successful formula take shape in their very first pairing, 1942’s Woman of the Year. 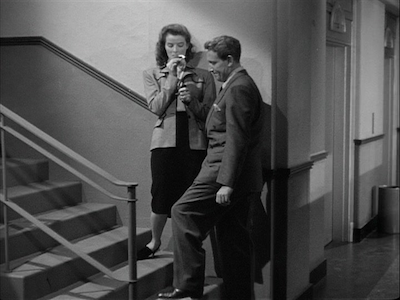 George Stevens (Gunga Din, Shane [review]) directs Woman of the Year, working from a script by Ring Lardner Jr. (M*A*S*H) and Michael Kanin (The Outrage [review]). Hepburn stars as Tess Harding, an influential newspaper columnist and radio commentator with her finger on the pulse of international politics. (“Hitler will lose! says Tess Harding” an advertisement declares.) On one radio appearance, she suggests baseball too frivolous a pursuit in times of war, raising the ire of Sam Craig (Tracy), the sports columnist at her very newspaper. He writes a response in the next day’s edition, to which she fires back the following day. When their boss calls them on the carpet for this feud, the duo meets for the first time, and they are immediately struck with one another. Sam invites Tess to a baseball game, and their seemingly disparate lives become hopelessly intertwined. 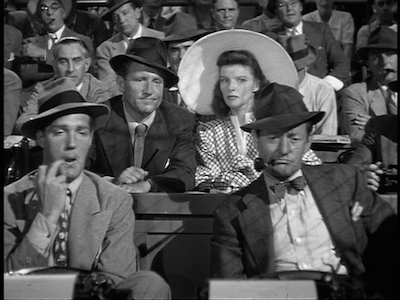 In most of the Tracy and Hepburn movies, including Adam’s Rib (my favorite) and State of theUnion, the actors portray a professional couple who both have jobs. Sometimes they are married, sometimes they are on their way to the altar. So it is in Woman of the Year: Tess and Sam will be wed before the halfway mark. More importantly, though, Tess will keep on working. She is not expected to be a doting housewife--not entirely, at least (but more on that in a second).

This is what I like about the Tracy and Hepburn formula: they are, for all intents and purposes, equals. They compete on a level playing field. He respects her, and she respects him. It’s a dynamic I would borrow for one of my romance comics, Ares & Aphrodite; I wanted a couple that had their jobs and did them well and part of navigating their relationship was balancing the two careers. (You’ll note, should you read the book, the main characters have pets named Kate and Spencer.) Inevitably, conflict would arise out of an imbalance within the relationship, of one spouse stepping over the line. In most of these films, including Woman of the Year, it’s that Katharine Hepburn’s character becomes too focused on her career and forgets she has a partner and responsibilities. In this case, she is so busy and has her eyes on so many stories, she tends to ignore her homelife and fails to follow through on certain promises, including the adoption of a Greek refugee. Tracy’s Sam gets fed up with always being second fiddle, particularly once he realizes Tess deflects from any serious discussion of the matter by pitching woo. 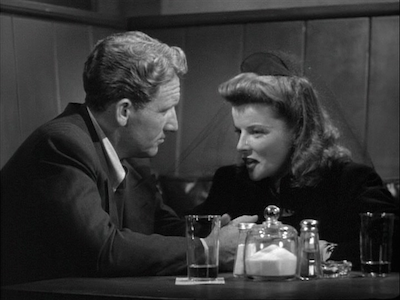 Obviously there is a questionable subtext here. It would not be a stretch to decode Woman of the Year as suggesting that Tess would be better off sticking to being a housewife and not concern herself with things that only distract her from that role. When the movie’s famous climax comes around, Tess’ attempt to do “normal” housework that “any idiot” can do, and failing suggests there is something wrong with her that she doesn’t even know how to make toast. This air of judgment is impossiple to totally deny, as it’s always Hepburn who has to get back in her lane in these movies, never Tracy. At the same time, a more gentle interpretation might be that Tess is losing the forest for the trees, and is only criticized for not being engaged with her family life. In the movie’s final scenes, note that she offers to give up her career, but Sam never asks her to. On the contrary, he doesn’t want her to change who she is, he just wants her to be present and give their relationship the attention it deserves. 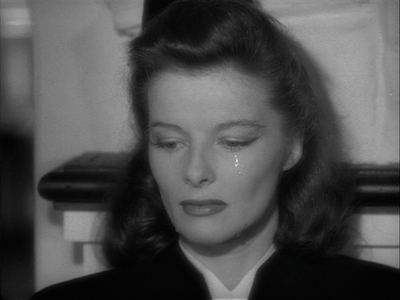 This explanation would certainly fit more with Katharine Hepburn’s overall image as a rule breaker and a progressive voice for women in cinema. Her version of Tess is never weak, never dumb, just sometimes blind. We could easily swap the roles and have Tracy play the distracted husband, and the plot would work just as well. It’s as much about blue collar vs. white collar as it is a battle of the sexes. And we can also cut Tess some slack by noting the constant interruptions from outsiders who can’t see her as having an emotional life of her own. Is it possible to suggest that the real message of Woman of the Year is that women should be able to have it all, a career and a relationship are not mutually exclusive? 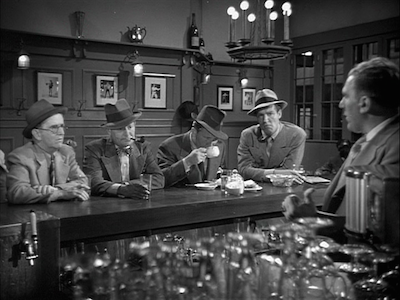 For what is ostensibly a romantic comedy, Woman of the Year does not exaggerate its love story. Sure, the couple falls for each other super quick, but their proclamations are rather subdued and lacking in flowery poetry. Which is not to say that there are not scenes to melt the heart, just that Stevens plays it much more subtle. The intimate scenes between his leads are almost uncomfortably intimate. Conversations spoken in hushed tones, the camera tight on their faces, a sense of being alone together, eavesdropping on their whispered sweet nothings--these are people connecting on a deep level, and Stevens is content to let the moments play out at their own speed.

The filmmaker takes a similar approach to the comedy. There are a plenty of places he could go broad with the gags, but he instead takes his time with them, lets them work naturally, be it William Bendix’s punchy ex-boxer boring a gaggle of drunks and dignitaries with his stories from the ring or the aforementioned attempt by Tess to prove her domestic skills. Despite being the film’s climax, Stevens doesn’t push the jokes in that scene too far beyond the natural. The most exaggerated he gets is with sound effects (the bubbling waffle batter, most noticeably). Rather than give voice to Tess’ panic, Stevens stages the bulk of the scenario with no dialogue. He trusts in Spencer Tracy’s reactions to properly orient the audience to when they can laugh and how. Tracy is masterful at the slow burn and prefers tiny moves to grandstanding. When he scoots away from the overflowing coffee pot, it’s just a touch to the left, he doesn’t make a show of it, and it’s all the funnier for being so undercooked. 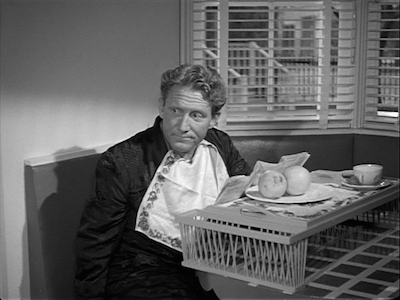 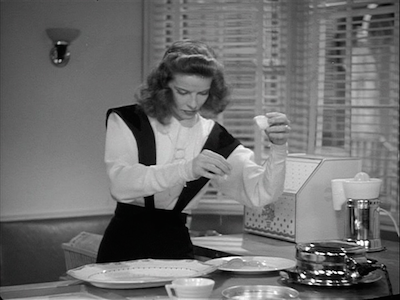 It’s that scene, really, that’s the key to the whole thing. It shows how Tracy and Hepburn fit together as not just a romantic duo, but a comedy team. He is her straight man, and the need to repair their love life adds a relatable urgency to her panic. Haven’t we all felt foolish trying to impress someone we care about? 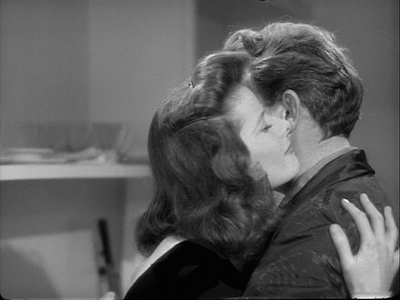 The new restoration of Woman of the Year is quite wonderful, full of rich detail and effectively capturing the black-and-white camerawork of Joseph Ruttenberg (The PhiladelphiaStory, Mrs. Miniver [review]). The disc is rounded out with interviews both new and old, as well as two excellent documentaries from the 1980s previously available on other releases. The charming The Spencer Tracy Legacy: A Tribute by Katharine Hepburn was previously released as a standalone disc in a Warner Bros. box with three Hepburn and Tracy features, including Woman of the Year. This personal homage, narrated by Hepburn, is a sweet love letter to a man long gone. I know some biographers quibble over the details, preferring to point out the rockier aspects of their union, but that’ a whole other discussion. This portrait is too heartfelt to dismiss.


The exhaustive career profile George Stevens: A Filmmaker’s Journey was most recently available as a second disc alongside the Blu-ray of Stevens’ James Dean-led epic Giant. It’s nice that Criterion has given us the whole thing rather than just excising the pertinent Woman of the Year segments. The documentary is interesting in and of itself, not just for how it establishes the relationship between the director and Hepburn, but also the detours it takes off the studio back lots, including Stevens’ tenure as a war photographer and his part in Director’s Guild in-fighting during the 1950s. 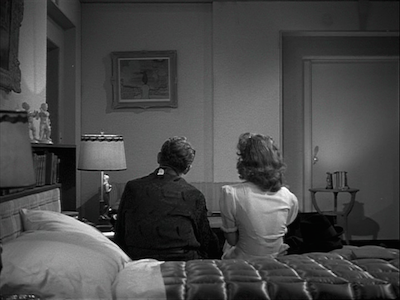 Please note the screengrabs here are from the 2000 standard-definition DVD and not the Blu-ray under discussion.

This disc provided by the Criterion collection for purposes of review.