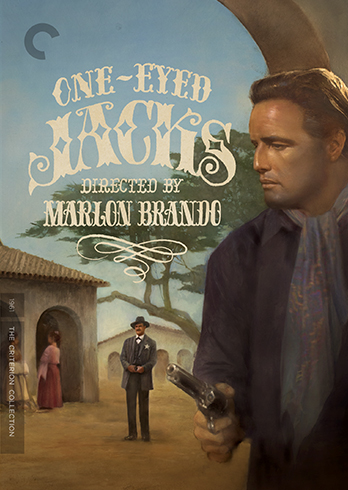 In the lore of One-Eyed Jacks, it’s said that Marlon Brando’s character Rio was supposed to be Billy the Kid, and was even identified as such up through a draft of the screenplay by the great Sam Peckinpah. The only problem was that, in historical contexts, Billy the Kid was inarguably a bad guy, and Marlon Brando never plays the bad guy. And so it was that the character’s name was changed, paving the gray way on a gray road where the bank robbing, lying Rio could be the hero of his own story.

A pretty good story it is, though a cynical one. Even in western terms, it takes a healthy dose of existential awareness to draft Rio as a hero. An anti-hero, maybe, despite the fact that he seems to stand for less than even Brando’s Johnny in the The Wild One [review], who you may recall was ready to rebel against anything you’ve got. But One-Eyed Jacks was Marlon’s show, and he fired not only Peckinpah but also Stanley Kubrick, who was set to direct the picture, and stepped behind the camera himself, enlisting Paths of Glory-screenwriter [review] and RamblingRose-author Calder Willingham to give him the morally ambiguous western he sought. An extended production followed, and a delayed release, and an eventual studio re-edit to get this thing out in 1961, allegedly excising some three hours of equivocation and nuance. Brando disowned it; your mileage may vary. 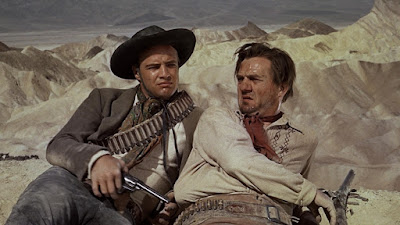 One-Eyed Jacks is a solid western, and a dark precursor to the revisionist history to come for the genre as the studio system crumbled and cinema evolved. Set in Mexico and California, One-Eyed Jacks has a decidedly Latino presence, and a pronounced racism to match (and that’s without considering whether or not Brando is intended to be a Mexican). The whites in the movie mingle with the people of color, but they don’t view them as equals. Not even Dad Longworth (regular Brando sideman Karl Malden), who married a Mexican woman (Katy Jurado, Under the Volcano [review]) and plays step-dad to her daughter Louisa (Pina Pellicer), is all that convincing as a progressive dude. Not with the way he orders his wife around. Not with how he reacts to Louisa’s dalliance with Rio, the man he betrayed once upon a time. It’s tough to tell if the character is named “Dad” ironically or appropriately. As Rio’s father figure of record, Dad has a lot to answer for. 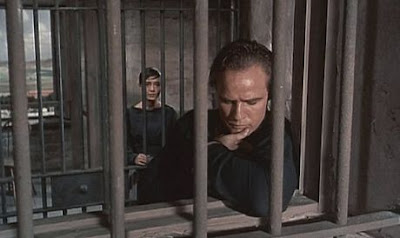 It’s the older man’s betrayal that sets the plot of One-Eyed Jacks into motion. After the pair rob a bank in Mexico, only to be chased down by federales, Dad takes advantage of Rio’s sense of honor and hangs him out to dry. Five years later, Rio escapes from prison and goes looking for the man who betrayed him. The search leads him to Bob (Ben Johnson, The Last Picture Show [review]), who is planning to rob the bank in the California hamlet where Dad has taken up residency and assumed the role of sheriff. If Rio helps Bob, he can also take his revenge. As it turns out, though, the job is not a simple smash and grab. The gang first settles in town, mingling with the locals while Rio makes a fake peace with his enemy--and woos the man’s stepdaughter. Then things go wrong, and everyone turns on each other. 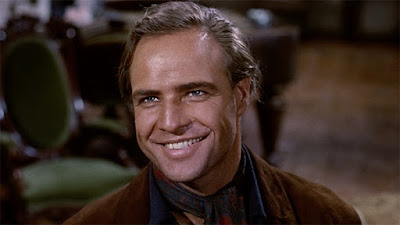 Comparisons have been drawn between One-Eyed Jacks and film noir, and there are certainly thematic similarities. Plot-wise, one could compare this to Robert Siodmak’s Criss Cross, with Brando taking Burt Lancaster’s role of the gangster who took the metaphorical bullet for the team and Dad playing the classic noir fall guy who looks to leave his past behind and set up a new, straight life away from his previous misdeeds. As any student of noir knows, however, the past never stays buried. The only problem is, Rio is not a clean crook whom you can root for the way Lancaster is in Criss Cross or Robert Mitchum in Out of the Past. Brando plays the outlaw with a quiet menace, his smirk ready to turn to a sneer at a moment’s notice, and real nasty mean streak simmering behind those piercing eyes. He appears to always be thinking more than he’s saying, and yet his expression is inscrutable. Is he pondering philosophy or simply dreaming of tearing the wings off of flies? Ironically, Rio is the worst to women, whom he outright lies to in order to get what he wants, but yet who also serve as his Achilles heel. He can’t stand to see them abused, and so he stands up for any female he sees getting pushed around, including an intense brawl with the eternally creepy Timothy Carey (The Killing). The anger blinds Rio to consequences. It brings to mind a rival to Brando’s The Wild One character in terms of teenage angst; Rio’s pathological need to act out has a similar cartoonish quality to James Dean going gonzo over being called “chicken” in Rebel Without a Cause. 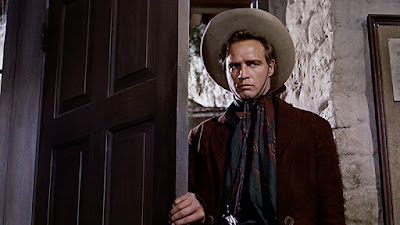 Of course, we also can’t dismiss the other men in the movie in any easy fashion, which at least gives Rio some moral ground. Everyone here has troublesome motivations. Some are cut and dried, like Bob, who is just racist and cruel, or Slim Pickens’ Deputy Lou, the comical “good guy” who is really a sexual predator obsessed with his namesake, Louisa. (The humiliation he suffers at the hands of Rio is borderline grotesque, and yet all too fitting.) Dad ends up being the most complicated. On one hand, he is a father looking to care for his family and a lawman with an eye on his community; on the other, he’s a petty cheat suffering a terrible case of imposter’s syndrome. Malden’s clear eyes show conflict...and fury. His showdown with Rio will have to be primal. Biblical. 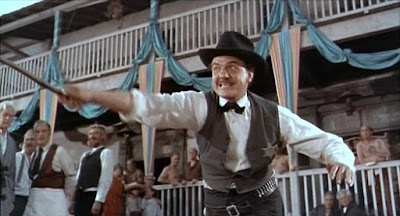 These characterizations are the notable standout in terms of One-Eyed Jacks being a “different” kind of western. Unlike the more convention-busting cowboy pictures that were soon to come, One-Eyed Jacks largely looks and feels like a traditional western. As an actor, Brando may be an entirely unique presence, but as a director, he is beholden to the trappings of the genre. In both look and plot, this is no different than a big-budget Hollywood western of previous decades. It’s more Vera Cruz [review] than The Hired Hand or McCabe and Mrs. Miller [review]. Which isn’t a knock. I really loved One-Eyed Jacks, and can only appreciate how even though Brando put on a familiar cloak, he used it to smuggle in a subversive message. The languid pace of some of the more typically California scenes, and the wounding and redemptive healing process Rio suffers through, predict some of the aesthetics and tropes of spaghetti westerns, the next big thing in horse operas.

Which is probably why the movie garnered such champions as Martin Scorsese and Steven Spielberg, who contributed to the restoration of One-Eyed Jacks that made this splendid re-release possible. As Marlon Brando’s sole directorial effort, it perfectly encapsulates his position as a movie star, one foot in the old studio system, one foot in the new cinema school, but his head entirely in the clouds, above it all, pursuing his own dream. 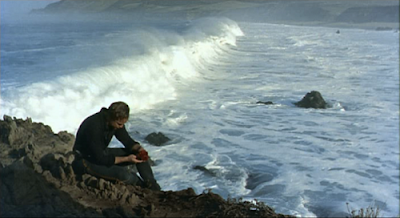 This disc was provided by the Criterion Collection for purposes of review.
Posted by Jamie S. Rich at 7:30 PM