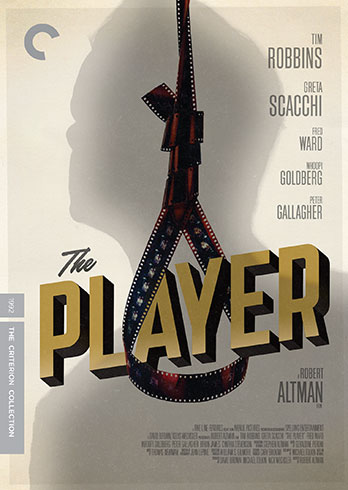 My thing about movies that are about movies is that the good ones make me want to watch other movies. If I watch The Bad and the Beautiful, for instance, I’m going to want to chase it with Cat People. Who didn’t watch the opening of The Player back when it was released in 1992 and not immediately go view--or even re-view--Touch ofEvil? Or how about pairing it up with Bicycle Thieves [review]? Better yet, another movie about movies, based on a book about movies, Elia Kazan’s vastly underrated adaptation of F. Scott Fitzgerald’s The Last Tycoon. Monroe Stahr, the movie mogul in The Last Tycoon, was modeled after Irving Thalberg, whom surely director Robert Altman and writer Michael Tolkin had in mind when they created Griffin Mill, their motion picture wunderkind, as played by Tim Robbins.

And it’s not just that The Player is about movies, it’s utterly in love with them. You get that right from the virtuoso opening shot, which runs without cutting for 8 1/2 minutes (certainly no coincidence), referencing not just Touch of Evil, but The Sheltering Sky and Rope and a couple of other films that pulled off similar feats (this was pre-Tarantino, mind you). There are easter eggs throughout this thing, and not just the cameos by then au currant celebs, but jokes and winks and the careful placement of other films and filmmakers to cue the audience to what is coming next. Be it Griffin walking under a movie marquee as the lights go out on The Bicycle Thief to signal his own oncoming moral dilemma, or the fake-out of Lyle Lovett walking by a Hitchcock photo as an indicator of suspense and a deep visual pun about “the wrong man.” The murder victim declares, “See you in the next reel, pal,” ironic last words befitting the noir plot Griffin Mill will find himself in, as predicted by the posters in his office. 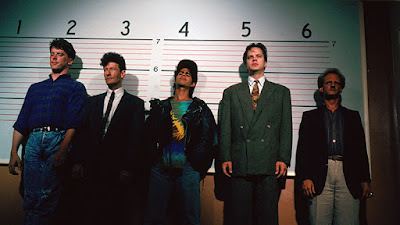 If you’re a cinephile, you’re going to eat this stuff up.

If you’re not, if you’re just a casual movie fan, then no worries, you’re going to dig The Player, too. It’s more than a collection of in jokes and elbowing Hollywood in the ribs. Altman and Tolkin bring an honest-to-goodness murder plot along with all the references. The Player is a movie that aims to be as good as all the other movies it emulates.

In terms of story, it’s simple. Griffin Mill is a hotshot Hollywood producer who appears to be going cold. In the midst of his concerns that his boss is bringing in his replacement (Peter Gallagher), he’s also getting harassing post cards from an anonymous writer that he never called back. When the threats turn scary, Griffin tries to figure out who it is, settling on one writer in particular, David Kahane (played by a young, nearly unrecognizable Vincent D’Onofrio). Griffin tracks Kahane to a revival screening of the Neorealist classic The Bicycle Thief (or Bicycle Thieves) and tries to reason with him. Only, Kahane isn’t the guy--even if he hates Griffin all the same. Accusations cause tempers to flare and a scuffle ensues, leading to the writer ending up dead and Griffin trying to make it look like a robbery. 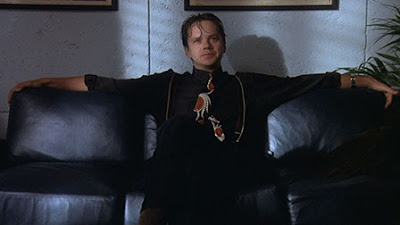 And he’s successful for the most part. The only problem is, someone saw the two of them together, and the cops (Whoopi Goldberg and Lyle Lovett) think it’s suspicious that the movie exec was somehow randomly the last person to see a no-name scribe alive. This line of thinking is only heightened when Griffin starts dating the deceased’s girlfriend (Greta Scacchi). In any conventional script, Griffin would certainly look guilty.

Which, of course, we know he is, but that’s immaterial. The question that lingers, what will he do to get out of it? That’s what any good suspense movie is about. Plus, we know that the real stalker is still out there, and he could strike at any minute. Somehow these things have to converge, right? That’s what the rules of screenwriting have taught us. Not to mention that the fake moviemakers in the movie we are watching keep harping on the need for a happy ending. Griffin Mill has to find his way out of it, or The Player will fail. 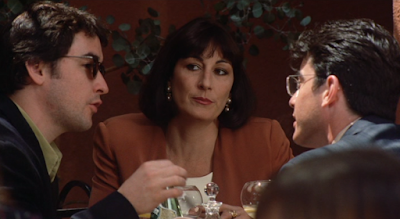 That might actually be The Player’s most ingenious bit, how Tolkin builds in all this conventional wisdom about what makes a successful movie--twists, turns, sex, surprising rescues, happy endings--and then delivers on each. It’s the artiest of blockbusters, The Player is. Like if the Kaufman Brothers in Adaptation cracked the code and managed to sincerely make it work. (Which, let’s be honest, it works in Adaptation; as soon as Donald takes over, the film becomes a crowdpleaser.)

Tim Robbins brings an interesting energy to his performance. He is both slimy and trustworthy, at times believably dim and yet otherwise extremely cagey. It’s excellent casting, how we feel about Griffin is probably how a lot of people feel about Robbins, who himself can be seen as a little pretentious and also a bit of a windbag due to his openness about his politics. Yet, he also always seems like a decent guy, he’d probably be pretty nice in person. We like him, but we want to hate him, too.

Fans of Hollywood lore will see other nods to history in The Player, perhaps most deftly in Fred Ward’s fixer character, which resembles MGM’s Eddie Mannix, immortalized in both the films Hollywoodland and more recently Hail, Caesar! There is also some amusing commentary about television actors wanting to be in movies, which seems only ironic and outdated given how so much and so many have shifted from the big screen to cable television for better opportunities in recent years. Tim Robbins himself was last seen on HBO in a bad Dr. Strangelove rip-off. 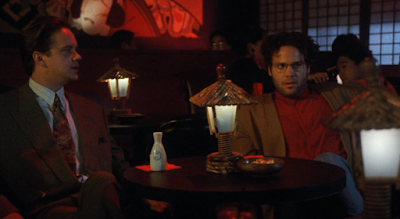 Television may be the current perceived assassin of big studio pictures, but moviemakers have had many threats before this one--including TV, which was originally supposed to be the death knell of the moviegoing experience back in the 1950s. Most would say the changing of the guard in the 1960s was the true end of Golden Age Hollywood--which is largely what Altman is paying tribute to here. His movie studio resembles the classic system as much as it does the bloated 1980s version he’s critiquing. The Player actually came at a time when independent films were having their heyday, and the Sundance crowd was moving in. I guess these things are cyclical. If the auteurs of the 1960s and 1970s gave birth to the blockbuster, then the indie scene of the 1990s gave us the mega blockbuster. Would there even be a Griffin Mill now, or would he just be a collection of stockholders?

I guess it doesn’t really matter. All we can say for sure is that he’d still be getting away with it. Now more than ever. 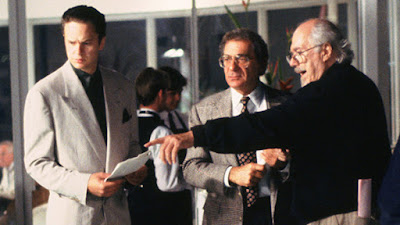