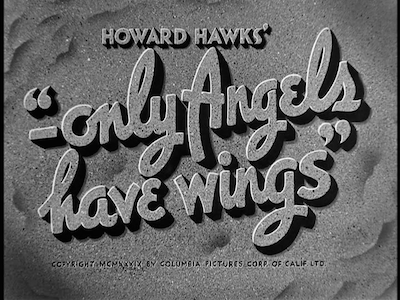 Why is it we always forget that Cary Grant could be rugged?

Sure, we remember that he’s funny and handsome and debonair, but even when he was playing the dandy, Grant was a man’s man. In movies when he wasn’t on the same continent as a tailored tuxedo, he was still suave and commanding, but in a way that was far different than the romantic playboy image that endures. 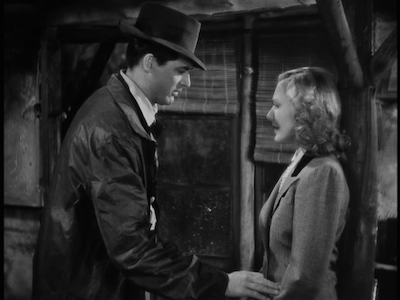 Should you not believe me, then you need look no further than Howard Hawks’ 1939 aviation drama Only Angels Have Wings. In the film, written by Jules Furthman (The Docks of New York [review]), Grant plays Geoff Carter, the head of an airmail service flying out of South America. His crew is made up of guys who are mostly young and have the daredevil streak that is the stock-in-trade of motion picture pilots. They live for their time in the air, and when on the ground, they spend it getting high, indulging in booze, food, and women. 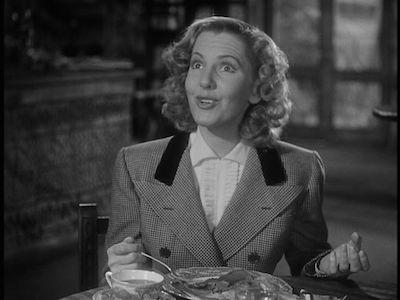 It’s one of those women, a tough Brooklyn gal, that serves as our entry point into their world, as well as the dramatic catalyst of much of what goes on in Only Angles Have Wings. Jean Arthur (The Devil and Miss Jones [review]) stars alongside Grant as Bonnie Lee, a traveling musician who runs into a couple of Geoff’s boys during a cruise layover. The two pilots (Allyn Joslyn, Heaven CanWait, and Noah Beery Jr., Red River) make a play for the beauty, but she’s more taken with the idea of conversing with her countrymen than she is being romanced. It would seem the American pilots have a similar homesickness, as they are all ready to have their heads turned by the visitor. This includes Geoff, who rearranges his team’s assignments to try to make sure he’s the one who can woo Bonnie before she has to return to the ship.

This proves disastrous, however; Bonnie has picked the wrong night to visit the airfield. Geoff’s people are responsible for shuttling the mail, and they must fly regardless of weather. One of Bonnie’s suitors has to go up in the terrible fog that has spread across the area, and he doesn’t make it back. 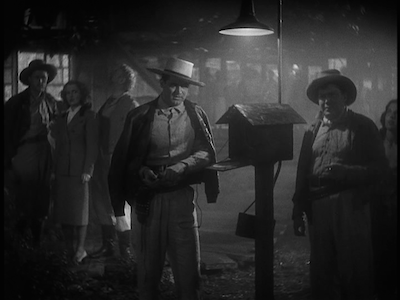 The scene in which Geoff and his right-hand man, Kid (Thomas Mitchell, Make Way for Tomorrow [review], Stagecoach [review]), try to guide the doomed flyer back to base is the first of many bravura sequences that Hawks delivers in Only Angels Have Wings. He plays the scene long, focusing on the ground team, cutting out ambient noise both for effect and because, storywise, it’s necessary for Geoff and Kid to ascertain where the plane is positioned. It’s a good trick. As they lean in to listen for the vessel’s location, we instinctively lean in, as well. Only Angels Have Wings has our attention. 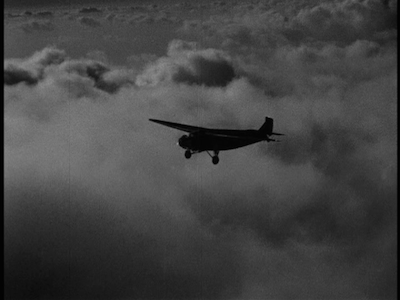 It’s not the only time that Hawks lets a moment run long in the film. His narrative style was Tarantino-esque before Tarantino, drawing tension from delayed resolution (see, for instance, Death Proof [review] for Quentin’s employment of the same kind of withholding). Hawks is patient, taking his time with the scene, knowing that a quicker release would have far less impact. A year later, Hawks would make movie history with His Girl Friday, when he famously had his actors (including Cary Grant) perform the script at twice the accepted pace. Here, however, he is not concerned about getting through the material quickly. At times, Only Angels Have Wings appears shaggy. It is episodic rather than plot heavy. In the camaraderie amongst the pilots, Hawks achieves a surprising realism, letting the conversations follow a natural course and somehow capturing the performances in such a way that they appear, if not improvised, at least unrehearsed. Take for example a scene where Geoff and Kid try to settle a disagreement by flipping a coin. The action when the actors chase the money is clumsy, the way it would be were two fellows trying to one-up the other in real life. Maybe Grant and Mitchell had marks to hit, but the audience would never see them. 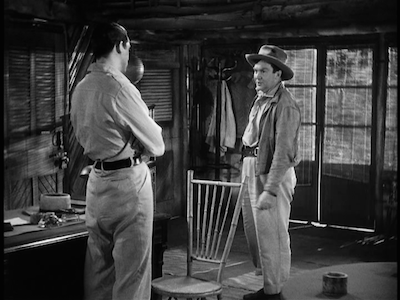 This stripe of convincing buddy-buddy behavior is essential to a film that is all about the relationships between men who have signed on to do a particular job. In many ways, Only Angels Have Wings prefigures the sense of duty that would permeate more patriotic films made in the years during World War II. What sets it apart from those films is its sense of isolationism. Geoff and his air force do what they do, and outside interference is not welcome, even when it’s a beautiful woman who is willing to accept that the untamable adventurer would be a fine lover just as he is. Only Angels Have Wings has story points in common with Casablanca. Both feature rogues who exile themselves to exotic, dangerous locales to escape a broken heart--but unlike Humphrey Bogart’s Rick, Cary Grant’s Geoff doesn’t do what he does because it would be good for others, he does it because it’s what is expected of him. It’s what he signed up for.

In this, Only Angels Have Wings also prefigures film noir, and even another famous Bogart picture, The Maltese Falcon [review]. There is an existential streak in Geoff that we would see in noir antiheroes. He has a code, and he must follow it. As a rake and a rapscallion, Geoff’s Achilles heel is his commitment to doing the right thing. Geoff’s fatal flaw is that if the mission is considered impossible, he’ll take flight himself rather than send one of his men. It’s the sort of soft and gooey character trait that makes audiences care for him and adds credibility to Bonnie’s unrequited love for the flyboy. We know he’s good despite his cynical protestations. 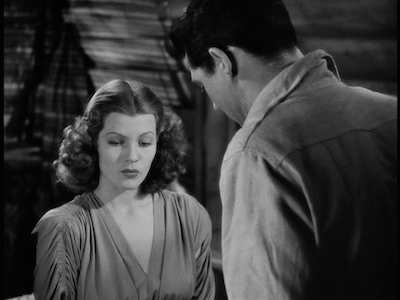 Also reminiscent of noir is the sense that the past will catch up with you, no matter how good your are at outrunning it. Fans of Gilda [review] take note, Only Angels Have Wings gives Rita Hayworth her breakout role, and in many ways, it sets the tone for her signature performance. Hayworth plays Judy, the wife of Geoff’s newest hire. She also happens to be the woman who broke Geoff’s heart, the mysterious phantom that Bonnie sees hovering over her would-be lover from the jump. Neither Geoff nor Bonnie reveal this fact, it would be too complicated and they both would rather deny their past. Yet, the added irony is that Judy’s husband (silent-era star Richard Barthelmess) is himself harboring a disgraceful history, one he has hidden from his bride. Geoff and the boys keep that secret to themselves, even though, for Geoff, exposing it might change everything. Move this plot to a casino, and it’s Gilda before Gilda. 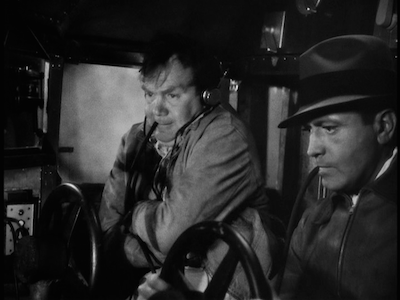 The big difference between Only Angels Have Wings and noir, though, is that Only Angels Have Wings is more redemptive. Both men will get another shot to prove themselves, and even Judy will have a chance to get it right. The only one who doesn’t need redemption is Bonnie, but then if we know our noir, the down-to-earth blonde might have a chance to ground the aerial daredevil. Just maybe.

Furthman gives his script a kind of doubled structure, like a coin with the same face on either side (plot point!). The first flight will be echoed in the last flight, and though we might guess that hearts will melt, the writing stays true to its main character’s principles right to the end. That last scene is pure old Hollywood, and yet smarter than it has any right to be, holding fast to the manly ethos laid out in the rest of the movie. I feel simultaneously more sensitive and more macho for having seen it. 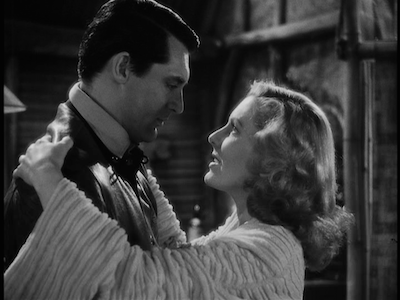 Criterion’s high-def presentation of Only Angels Have Wings is wonderful, offering a pristine picture and a soundtrack that lacks any snaps, crackles, hiss, or pops. Extras include a radio performance of the movie, condensed for the home listening audience, and a new documentary examining Howard Hawks’ other aviation-themed movies.

And for comic book fans, the cover and interior illustration is by Francesco Francavilla, artist on Zorro and Afterlife with Archie, as well as creator of the pulp-inspired The Black Beetle. 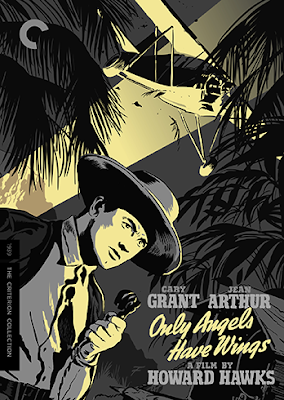 The screengrabs for this review were taken from an earlier DVD release. The Criterion disc under review was provided by the Criterion Collection.