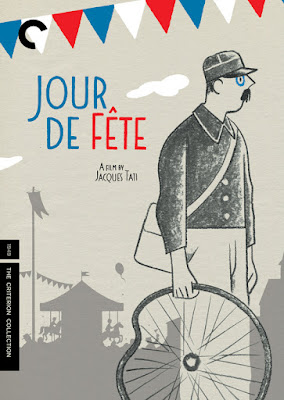 The journey to bring Jour de fête, Jacques Tati’s 1949 full-length directorial debut, to screen was not one I had been familiar with. When making the comedy feature, Tati shot simultaneously with two different cameras. One used a then-untested color process, and the other recorded the performances in standard black-and-white, a precaution just in case the color process didn’t work. This concurrent fascination with and distrust in technology is amusing, given how this would be a regular theme in Tati’s later M. Hulot films. It seems art did imitate life in this case.

It also turned out to be a smart move. The color labs behind the film shut down before ever processing a reel, and so Tati released the black-and-white version to cinemas. In the 1960s, he would revisit Jour de fête and hand-color certain elements, as well as putting in some new footage, but it wasn’t until 1995 that a full version was finally made from his original color negatives. All three options are given here, in Criterion’s lead disc of their The Complete JacquesTati collection. I opted for the 1995 release, which looked pretty good, even if the color is not as vibrant as a 1940s Technicolor picture from Hollywood. 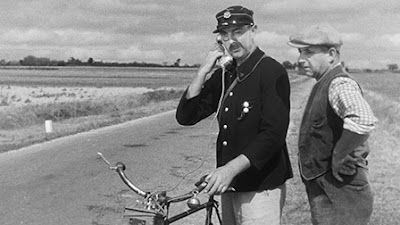 In Jour de fête, Tati stars as Francois, a bicycle-riding postman for a small village. On the “big day” referred to by the title, Francois’ village is preparing to host a traveling street fair. The run of the movie shows the carnies getting ready, the town’s participation in the festivities, and the hangover the morning after, focusing mostly on how Francois gets through his day. The mustachioed public servant is the object of regular ridicule from his customers and neighbors, and even the visiting carnival workers get in on the act. They can read this rube from a mile away. He’s eager to please and none too bright.

Francois’ main problem is combining defensiveness with hubris, and so most of his misfortune occurs by his trying to prove he is a big man. He’ll go from nearly being beaned by a falling pole to instructing the men on how to put it in the ground. Seeing a film that claims American postal workers are using helicopters and airplanes to deliver letters faster and farther makes Francois work on his speed techniques--with a little help from the roustabouts who run the merry-go-round. 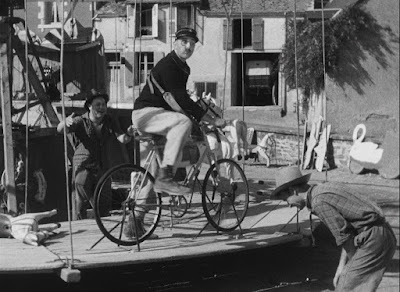 It’s one of Jour de fête’s best gags, the gangly bicyclist riding his bike in a stationary position while the carnival ride spins round and round. It’s a whole lot of effort just to end up in the same place. Francois is too self-assured to see his own ridiculousness. That’s perhaps why we laugh along with those teasing him rather than feeling sorry for him: he kind of deserves it. Late in the film, when he discovers one prank has left a ring of ink around his eye, Francois fails to laugh at himself. Instead, he deflects and lays into criticizing his coworkers for being slower than he is--making it all the more hysterical when, shortly thereafter, Francois’ bicycle takes off on its own, and he must run after it in a lengthy chase sequence. Instant karma.

The trouble the bike gets into and the distance it goes shows the kind of inventiveness that would be Tati’s calling card. It’s a little bit Buster Keaton, a little bit Charlie Chaplin. Having honed his skills in a series of comedy shorts, Tati appears confident in his humor here. His gags are mostly physical and largely pantomime, they are never really dialogue-based, borrowing more from the silent titans than contemporary movie comedians. Francois probably talks in Jour de fête more than Hulot in any of the other films combined, his repeated exasperated declaration “That takes the cake” getting more silly each time it’s uttered. 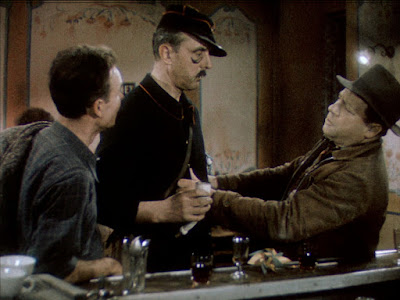 An example of the look of the color film.

Yet, Tati also takes full advantage of the soundtrack. Audio effects are important throughout, such as the aforementioned scene in the post office, where every time Francois steps out of the room, we hear an even more outrageous sound cue, only for his coworkers to barely react. A scene early in the film, when the actions of a carny and a local girl sync up with an English-language western being shown in the fair’s cinema tent, is vintage Tati, combining human emotion with a modern device in a way that allows one to supersede the other--a glimmer of the sort of commentary that would eventually make Playtime [review] such a vital masterpiece. So, despite being less vivacious and funny than Tati’s next several films, Jour de fête is still a worthy precursor. 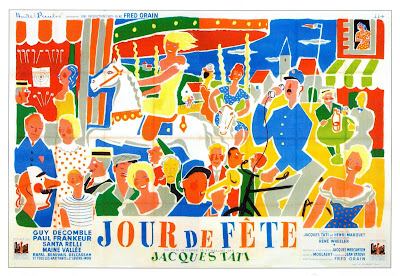