BURDEN OF DREAMS - #287/GARLIC IS AS GOOD AS TEN MOTHERS

"I am running out of fantasy. I don't know what else will happen now.." 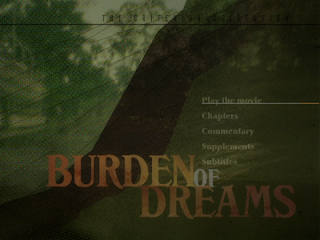 Werner Herzog speaks those lines at a juncture in Burden of Dreams, Les Blank and Maureen Gosling's 1982 behind-the-scenes exposé of the making of Herzog's film Fitzcarraldo, when his appreciation of irony is rapidly depleting. The Peruvian natives he has hired to be extras and crew on the production have left the location to go answer tribal violence and territorial threats, and Herzog is beginning to realize that, despite his best intentions, his presence in these people's lives has started to affect them in unforeseen ways. In that, he is no different than the rubber barons his script vilifies. He has come to this land to take something from the indigenous people. 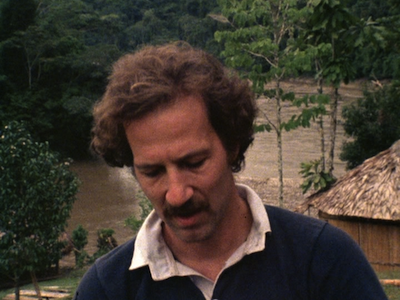 It's one of many unfortunate cross-overs that the filmmaker has with his subject. Fitzcarraldo is the story of a European immigrant who went to South America to make his fortune, and once he had, squandered it in hopes of building an opera house to bring his beloved Caruso to sing in person. Klaus Kinski stars as the baron, while Claudia Cardinale co-stars as his love interest, a madame running a brothel. The film's climax details Fitzcarraldo's biggest and most fatal hurdle: getting his boat over a mountain, taking it from one river to another on the opposite side. It's a perilous act, one that is achieved in mud and blood, and at the expense of the lives of the local people he hires to pull it across. 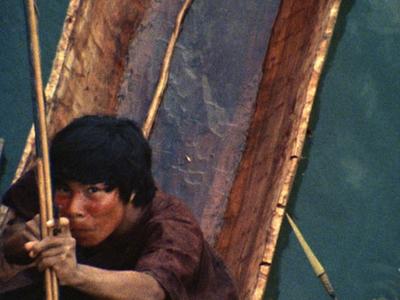 What Burden of Dreams chronicles is how this went from being a written metaphor in a screenplay to an active and lengthy mishap for its author. Over the four years that Herzog tried to make Fitzcarraldo, shooting stalled twice before finally getting underway the last time--only to become elongated by the director's misguided insistence on realism. He shot his movie deep in the Peruvian jungle, far from where it would have been more safe and secure, and then proceeded to demand that his crew pull a boat up a mountain for real. No faking it here! 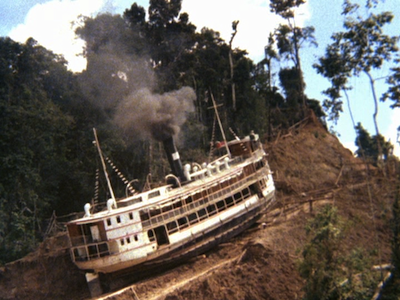 It's fortuitous that Blank and Herzog chose this particular production for the documentarian to follow. Honestly, the real-life story of Burden of Dreams is far more compelling that Herzog's finished film. It's one thing to create a fiction where a man's goals become a disease and his vision is blinded by obsession and even madness; it's another to watch it happen for real. Herzog, who is infamous for pontificating about his experiences and narrating documentaries where he theorizes about the lives of others, is caught in a philosophical and literary whirlwind of his own design. Burden of Dreams charts the decline of his artistic optimism. As the production becomes increasingly unmoored, so too does the man who would presume to orchestrate it. The last scenes quite literally show Herzog setting one of his boats adrift and trying to capture the chaos on film as he smashes into the rocks, taking his cameraman and star with him. 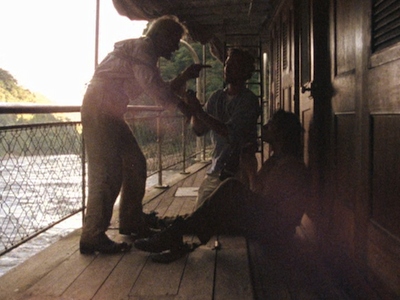 At the same time this is all happening, Blank and Gosling are also getting to know the local crew that have come on board to assist the crazy German. There is a lot of downtime during the production, and this allows Burden of Dreams to examine local politics, question how white society is encroaching on tradition, and even record some of the customs that still exist amongst the native peoples. There is an interesting contrast between the resilience of an ancient culture and the mutable whims of modern man. 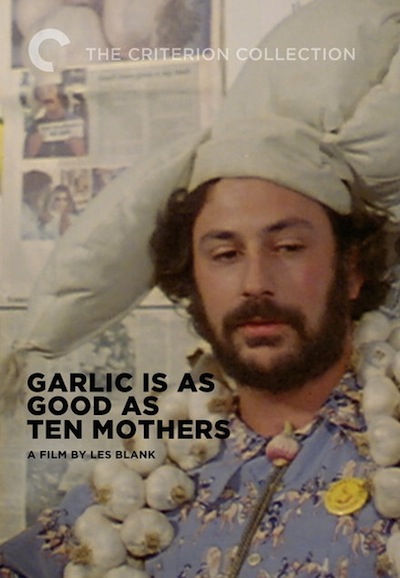 Burden of Dreams was not the only collaboration between Les Blank and Werner Herzog. In the early 1980s, two more of Blank's films featured the director, either directly or tangentially. Herzog makes an appearance in Blank's mid-length feature Garlic is as Good as Ten Mothers. (Not included on the Burden of Dreams DVD, but it is on the Criterion Hulu channel.) The director's cameo is a brief side trip in the documentary. Blank's study of the quirky cult of the clove eventually leads him to ponder its place in vampire lore. He asks Herzog about its absence from his remake of Nosferatu. Perhaps more interesting than the answer is Werner's own puzzled query, "Why did you ask me that?" It demonstrates why the two likely got along: they are both endlessly curious about what motivates people.

Garlic is as Good as Ten Mothers's main thesis is to understand why garlic had long lacked in popularity in America, and what was at that time causing a change in its reputation. Blank centers his study on the annual garlic festival in Gilroy, a Northern Californian town where much of the country's garlic is grown. (I've driven through there. It will cause you to wonder if people can truly become acclimated to any smell, the day-to-day coping with that odor must be a real challenge.) The odd nature of the gathering, where people dress in costume and sing songs in honor of their chosen spice, sets the tone for the rest of Garlic is as Good as Ten Mothers. Garlic is an intense vegetable that inspires intense devotion. 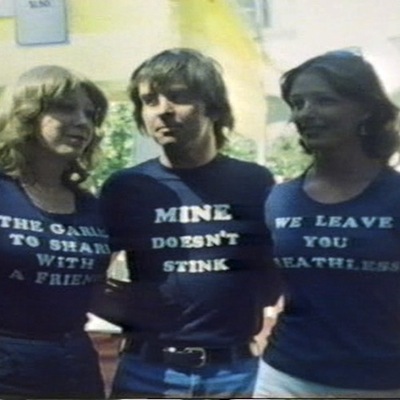 Blank finds a colorful cast of characters. There is the gypsy singer and connoisseur who tells of garlic's important history amongst the Spanish poor; there is the man who literally wrote the book on what he calls the Stinking Rose (and opened a restaurant of the same name); and there are a variety of cooks from many different cultural backgrounds. Blank has tremendous affection for kooks, and his movies gleefully respect that, even if maybe sometimes you wish he'd drop some of the quirks and tighten up the narrative. 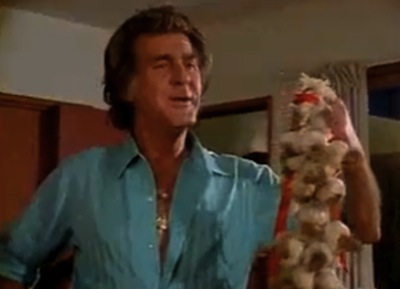 Facts emerge as the movie progresses, and the title begins to make sense once we hear testimony of the herb's restorative powers, but this is really secondary to the collage of humanity that Blank has cut together. He moves back and forth through different commentators, comparing customs and culinary techniques, letting the central plant be the common thread between them all. It seems no matter where you are in the world, be it China, Mexico, or the American South, garlic will at some point reach your taste buds. It's the main seasoning in the melting pot of life. 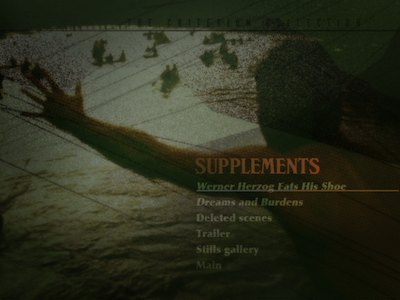 It's no surprise then, that Blank focuses on the big clove of garlic Herzog uses as central flavor when cooking his boot in Werner Herzog Eats His Shoe. Based on the fact that the two shorter films (Werner Herzog Eats His Shoe is only 20 minutes long) were released the same year, and how Herzog looks in both, the Nosferatu Q&A in Garlic is as Good as Ten Mothers likely happened on this shoot. For Werner Herzog Eats His Shoe, Blank films the German auteur making good on a bet: if Errol Morris could finish his first film, The Gates of Heaven, his mentor promised to literally eat his shoe. Ever the hardline poet, Herzog eats the one he was wearing when the wager was made.

Having seen Werner Herzog Eats His Shoe before, I came back to it thinking it a trifle that did not live up to its reputation. You see a man eat his shoe, and that's that. What a documentarian chooses to show you, however, is telling. For Herzog, this is a bold act. He is confirming for all neophyte and wannabe film directors that the dream is real. Yet, Blank shows how far the man can take such symbolic acts by connecting the leathery meal to the director holding court and quite literally justifying such an absurd event by denigrating his own profession and creating pretentious theories that connect his own perceived shallowness with larger social issues. It's like the folly of Burden of Dreams in microcosm. 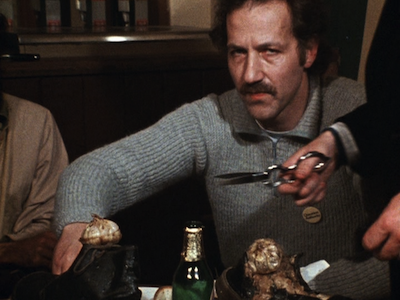 Les Blank died this past April. The NW Film Center in Portland, OR, will be showing all three of these films as a tribute to his legacy on Friday, July 19, and Satuday, July 20. Check their website for times.