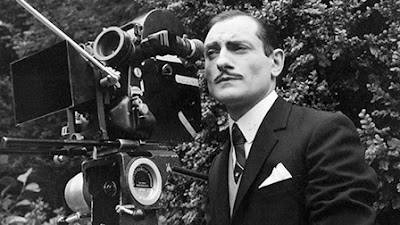 If you're unfamiliar with the name Pierre Étaix, don't worry, you're not alone. Up until recently, the celebrated French comedian's films have been largely unavailable due to a legal tangle with the distribution rights. I don't know the particulars of what finally caused those rights to be untangled, but soon all film fans will have a chance to get to know Étaix's artistry, thanks to a touring retrospective of his work and an upcoming Criterion boxed set.

The writer/director/star only made a handful of feature films and shorts through the 1960s, following stints as an assistant and gag writer for the likes of Jacques Tati, Robert Bresson, and Nagisa Oshima. Étaix left film to return to his first career as a clown, but not before leaving an indelible mark on the cinematic landscape. In reviewing his final comedy feature, Le Grand Amour, released in 1969 and leading the dual weekend of Pierre Étaix films playing the NW Film Center [full schedule here], it's easy to see why. His playful flights of fancy, careening out of conventional narrative and into the realms of imagination, are delightful and intoxicating. One can't help but imagine that movies like Le Grand Amour were an early influence on Jean-Pierre Jeunet, whose Amélie

would not be out of place as one of the many girlfriends Pierre fantasizes about throughout this rumination on love and marriage. (Etaix actually had a small role in Jeunet's film Micmacs [review].) 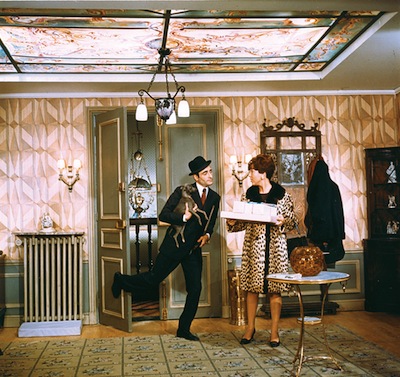 Le Grand Amour begins with a wedding, as befitting any such movie. Étaix is at the altar, waiting to tie the knot with Florence (Annie Fratellini), and remembering his past loves and imagining a few paths not taken. The ceremony ends, and the film jumps ahead a decade. Pierre and Florence have settled into their married life, with all the ups and downs that entails. They are mostly happy, despite the gossip that's being passed around about them. In one ingenious sequence, Étaix shows the evolution of a rumor, as a chance greeting is soon inflated into a full-grown affair, the moment replaying and escalating with each added whisper. Pierre takes some lumps for this false story, before falling into a similar trap for real. He becomes quite smitten with his new secretary (Nicole Calfan), despite her being 20 years his junior.

The rest of Le Grand Amour shows Pierre trying to concoct a way to have the young girl and be free of his wife. He lives out the illicit, though amusingly tame, relationship in dreams, both of the sleeping and waking variety, debating the pros and cons. One amusing scene shows him obsessing over a strand of hair left on his desk, going back and forth between it and a portrait of his bride. It's one of the more straightforward segments of the film; other bits break the bounds of reality. When Pierre consults with a friend, that man becomes a part of the daydream, often to have his own speculations backfire (pie to the face!) because he doesn't understand Florence the way her husband does.  In Le Grand Amour's most memorable stretch, Pierre's bed leaves his room and goes out onto the open road, joining the traffic of other slumbering dreamers as he searches for the object of his affection. The beds, in their way, have become cars, and Étaix ups the ante by having their drivers suffer from engine trouble, crash into one another, and other mundane experiences normally reserved for regular metal automobiles. 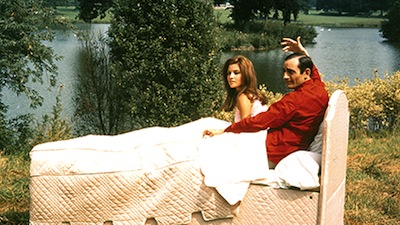 Étaix is a charming presence. His approach, at least here, is quieter than the likes of Tati or Rowan Atkinson, who bears a slight resemblance to the French comic. Le Grand Amour has some slapstick, but it's mostly situational. Étaix prefers mix-ups to pratfalls. His pacing is more languid, as befitting a dreamer. The laughs are subtle and unforced. Some jokes sneak up on you, such as when Étaix leaves his apartment to go downstairs and hang up on his mother-in-law in person. In that same scene, the strains of violin that have been playing under the action are revealed to be coming from a live player, Pierre's henpecked father-in-law. The comedian otherwise doesn't use music to emphasize his punch lines, that would be too obvious. Étaix lets the humor happen, he doesn't telegraph.

This allows for a cleverly ironic ending, one that maybe I should have seen coming, but that is funny enough to transcend cliché. Suffice to say, Pierre learns to appreciate what he has, only to find himself becoming jealous via the same kind of speculation that already bit him on the butt once. 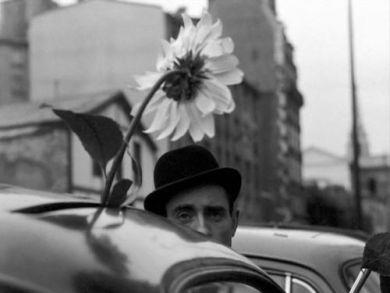 It should probably be noted here that the majority of Étaix's films were co-written by Jean-Claude Carrière, a prolific screenwriter who also worked with Luis Buñuel on most of his movies through the 1960s and 1970s and who also worked on the script for Schlöndorff's adaptation of The Tin Drum. The Étaix/Carrière collaboration dates all the way back to the clown's earliest film efforts, including his second short, Happy Anniversary (1962), which makes for a nice thematic pairing with Le Grand Amour (probably why the NW Film Center is showing them together). In this black-and-white comedy, Pierre Étaix plays a husband trying to get home for his anniversary dinner, only to end up stuck in traffic and himself causing further disruptions for his fellow drivers as he tools about running errands. Some of the on-the-road humor, as we ping from car to car, traveler to traveler, is reminiscent of Tati's Trafic [review], which was still over a decade away. 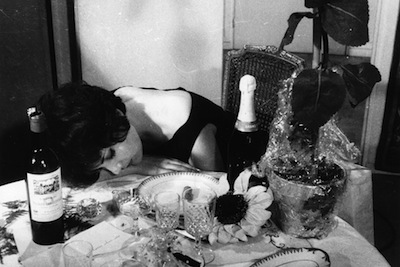 Surely glad to learn about Pierre. So much useful and knowledgeable information has been dropped here for the fans and readers. The film contributions and life of Pierre were very noticeable. I like to have my long journey in such stuff. I would like to say my heartwarming thanks to the author of this post and also would like to share a site that works for the match making intelligence for the new couple and it's here 노블레스결혼. Hope this information also will be interesting to enrich someone's store of knowledge.