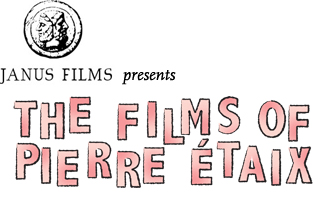 Pierre Étaix's second feature, Yoyo, finds the director and star confidently assuming the role of auteur. This 1965 vehicle is not only a great showcase for the performer's talent, but also a tribute to his heroes and the comedic tradition that informed the Étaix persona. It's a celebration of comedy, but also one clown's celebration of self.

Yoyo opens in the 1920s. Étaix plays a lonely millionaire who spends his fortune on elaborate entertainments to cure his ennui. Model boats, dancing girls, live music, alcohol--none of it can ease the man's true problem, his broken heart. The millionaire pines for a lost love. 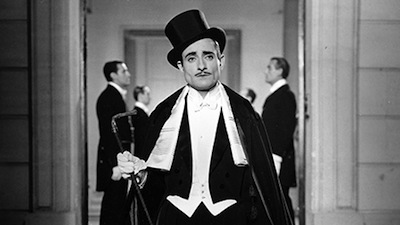 This opening scenario is crafted as a silent film, albeit one with sound effects rather than a musical score. Étaix shows the millionaire's opulent life and the intricate design of his house via a series of sight gags. There is an important visual theme running through all of Yoyo, as Étaix explores the notion of illusion as it pertains to entertainment and how that relates to the illusions we create in our own lives. The millionaire is seeking happiness through simulacrum. None of his pleasures are real, they are designed.

Fate intervenes twice for the millionaire. First, when a traveling circus stops by to perform on his estate, and he realizes that his former lover is amongst their performers. She is a clown, as is her son, the young boy Yoyo (Philippe Dionnet). The child is inexplicably drawn to the millionaire's home, and he sneaks around the mansion, examining its many treasures, until the troupe's elephant, the boy's own guardian angel, comes looking for him. The connection should be obvious: Yoyo is the son the millionaire didn't know he had. A sort of paternal sixth sense has drawn them together. Fate's second intervention is the stock market crash, which forces the millionaire out of his home. With nowhere else to turn, he joins his long-lost family on the road, becoming a performer alongside Yoyo and his mother. Étaix times the onset of the Great Depression with the advent of "talkies," and so Yoyo shifts from silent expression and title cards to full dialogue. 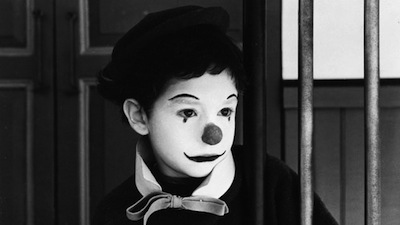 Interestingly, though Yoyo is kind of designed as a mini-history of 20th-century entertainment, Étaix only pays tribute to motion pictures as sly asides. Yoyo's youth is spent traveling from town to town, perfecting his act with his parents and dreaming of one day having a real home like the one where he met his father. On one stop on their tour, the millionaire despairs to see that another circus has beaten them to the punch. The camera pans to a poster advertising a different show, and cinephiles will recognize Giulietta  Masina and Anthony Quinn from La Strada [review], Federico Fellini's cinematic tribute to the traveling circus. Indeed, little Yoyo's make-up is not that dissimilar to Masina's. Plus, both films pay tribute to Charlie Chaplin. Étaix does it twice, actually. First Yoyo's mother borrows the Tramp's act for her own, and later, when the narrative shifts to WWII, Étaix upends The Great Dictator [review] by showing Hitler similarly cosplaying as Chaplin's signature character. It's around here that Étaix takes over playing Yoyo as an adult, showing the clown performing for Allied soldiers before being captured by the Germans. It's actually a bizarre coincidence that years later Étaix would have a role in Jerry Lewis' infamous 1972 disaster The Day the Clown Cried, about a clown who performs for the prisoners of a concentration camp. Smartly, Étaix skips right over Yoyo's incarceration, instead moving straight to the post-War period when he returns to the circus.

(Quick Sidenote: I'd be remiss if I didn't mention that there was a mutual appreciation between Pierre Étaix and Federico Fellini. Only in researching for this series did I realize that I knew Étaix from his segment in Fellini's documentary I clowns, released in 1970, and reviewed by me here. Criterion fans might have also seen Étaix in a small role in Aki Kaurismäki's Le Havre [review].) 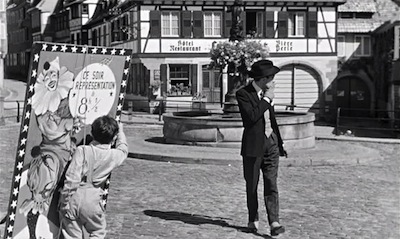 The war is addressed only indirectly following Yoyo's freedom. A soberness settles over the character, however, and he pours most of his energy and money into finally rebuilding his chateau. Étaix has split Yoyo into two halves, and the back part basically shows the son reliving the mistakes of his father. As he isolates himself, Citizen Kane

-style, he becomes estranged from what matters. Yoyo finds new fame on television, but at the sacrifice of spontaneity and audience connection. Another illusion is shown here, as what we initially take as a despondent Yoyo performing on the street turns out to be Yoyo on the boob tube--though his skit truly represents what is in his heart.

At the same time, Yoyo also fails to seize on his love for the beautiful acrobat Isolina (Claudine Auger, a.k.a. Domino from Thunderball

). Yoyo culminates in the ostentatious housewarming party the sad clown throws for himself. The closing of the picture thus mirrors the opening, as Yoyo's party guests engage in complicated slapstick and the host spends most of the event chasing down his own dissatisfaction with the situation he has created for himself. His redemption comes via another repeated image: the return of the elephant who was his childhood guardian. Yoyo's new friends flee in fear, but the grown man is otherwise reminded of everything the elephant represents, the memories he should have never forgot. 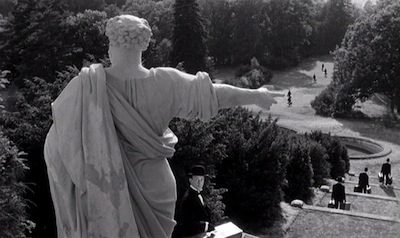 This makes way for Étaix's brilliant closing shot, a poetic return to the traditional performance space, a validation of the circus' capacity to entertain. The ending is almost clairvoyant, as Étaix himself would eventually leave his fame and return to his first love, though that was still half a decade away. Watching Yoyo, the mind boggles imagining the movies Pierre Étaix could have made had he stuck with it. With just his second feature, he shows himself as an entertainer with heart and insight, a worthy successor to Chaplin and the rest. Great comedy always has a bit of sadness, and Pierre Étaix is a clown who has the soul of a poet. Laughter is a sign of one's health and humanity, and like the character he portrayed, this performer's commitment to entertaining others, regardless of where he pursued it, was never more obvious or essential. 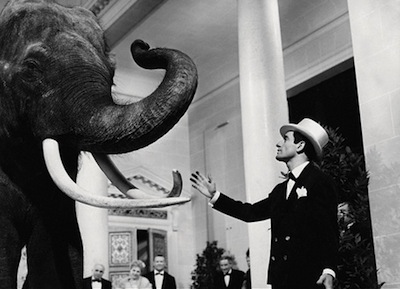 You can see Fellini and Etaix together here:
http://www.youtube.com/watch?v=TjnqM_xqH5U