ON THE BOWERY - CRITERION CHANNEL 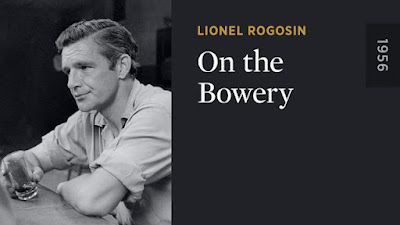 Lionel Rogosin's 1957 film On the Bowery is a landmark of independent cinema and a key component in the expansion of the documentary genre. Shot over several months in New York's infamous skid row district, Rogosin adopts the ethos of the Italian Neorealists and applies it to the American experience. His movie, while not perfect, is an emotional document of a harsh reality, teeming with honest interest that goes far beyond mere voyeurism or common exploitation.

The son of a wealthy textile family, Rogosin turned to filmmaking as a response to WWII. He wanted to make sense of a world he thought had gone crazy and to use his family's riches for something more important than just making more money. It took him a while to suss out just how to make a film, and to assemble his crew from amongst New York's cinema population, but by the mid-1950s, he had it sorted. He spent six months by himself living on the streets of the Bowery, getting to know the men there. From amongst his new drinking buddies he pulled out several distinct personalities, including the two key players in the eventual movie: Ray Salyer, a handsome Kentucky boy on the sauce, and Gorman "Doc" Hendricks, an old salt who knew his way around the bar and flophouse alike. 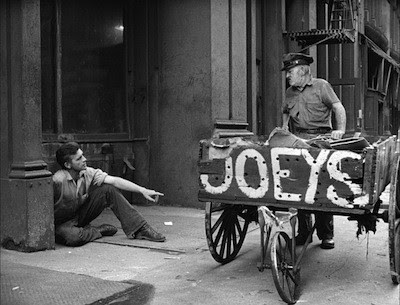 On the Bowery is a loosely plotted assemblage of real footage and staged scenes. While they are easy to tell apart, one does not weigh heavier than the other. Salyer plays himself as a new arrival to the drunken streets, with Gorman both taking him under his wing and taking advantage of him. For many on the drink, another man's worth only extends as far as his bar tab, and the undulating patterns of a life spending nights getting soused and mornings fighting the hangover set a pattern for these lost souls that they can't get out of. Someone like Ray still means it when he swears he will kick the habit, but a guy with as much experience as Gorman knows otherwise. The best exchange of the movie is when Gorman says he has sworn similar oaths 1,000 times, and Ray counters that he's younger and so he's only tried it 800 times. It's meant to be funny, but there's not much faith put in the notion that one of those last 200 will be the magical cure.

Conversations like that one punctuate the "narrative" of On the Bowery, keeping Ray's basic story on track. His struggle to survive the skids was the sketch that Rogosin and his collaborators, cameraman Richard Bagley (he also shot Sidney Meyers' The Quiet One) and writer Mark Sufrin, put together to keep the film moving forward. In the midst of these controlled improvisations, they cut in footage of the real men on the street. Each chiseled visage implies its own sad story. Eventually, the faces move off the corners and into the bars, and when they've had enough to drink, the reality and the fiction merge. The party turns into a cacophony of arguments and come ons, and even fist fights. 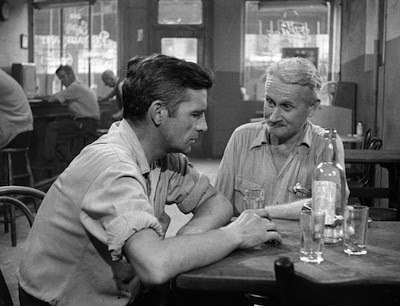 Editor Carl Lerner is credited with helping Rogosin shape his hours of footage into a concise, cohesive movie, and it's to his credit that it all hangs together. (Lerner would go on to edit such classics as 12 Angry Men [review] and The Fugitive Kind. [review]) The bulk of On the Bowery never really feels manipulative or manipulated. Rogosin only strays into conventional fiction when he attempts to wrangle the ending into something of a message. Granted, Gorman's final act of kindness toward Ray is born out of guilt for ripping him off, and the good Doc exaggerates his contribution in his own retelling of it, so at least it's still honest about what motivated him. Rogosin pushes hope, but his fingers are crossed.

The archival print of On the Bowery, put together by the Cineteca di Bologna and archivist Davide Pozzithe and distributed by the fine people at Milestone Films, is exceptional. The image quality is fantastic, and Bagley's stark photography serves to preserve a history that might otherwise have been lost. The conditions we see are filthy, and yet, sadly, not all that unfamiliar. I was hit up for spare change as soon as I left the theatre, and I'm ashamed to say, my first response was to lie and say I had nothing to give. I thought better of it shortly after and gave the man what I had. I don't expect a pat on the back, I was as selfishly motivated as Gorman or anyone else in the movie; I just admit it here as a reminder to myself to maybe not be so quick to take the default position in the future. How else can I suggest you watch a movie like On the Bowery and listen to what Lionel Rogosin has to say? Critic, heal thyself. 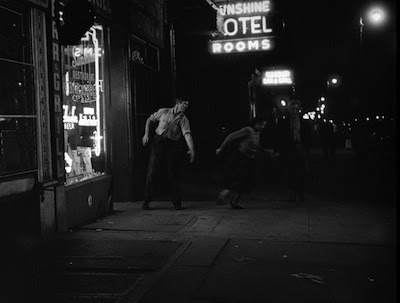