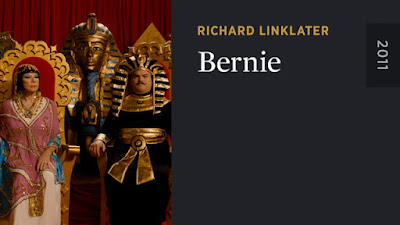 There's something about the way the title card declaring that Bernie is based on a true story that compels you to think that maybe you're being conned. Perhaps it's just that Fargo has made the moviegoing audience a bit suspicious of quirky films about a murder in a small town, but it's not helped that co-writer and director Richard Linklater and star Jack Black, who previously worked together on The School of Rock, don't even try to hide their tongues in their cheeks. They're pushing those suckers hard against the inside of their mouths. The bulges are evident.

And yet, Bernie is taken from real life. The story of an East Texas funeral director who killed his rich benefactor and then spent nine months pretending she was alive while he spent her money has already done the "true crime" rounds. Screenwriter Skip Hollandsworth wrote the article that is the basis for the film. His angle was to focus on the fact that many of the citizens in Bernie Tiede's community rallied around him and pushed for leniency despite his having shot a senior citizen in the back four times. Linklater makes much dark comedic hay out of this idea, attempting a light-hearted version of a docudrama by blending "real" interviews with "authentic" townspeople with the more traditional humorous staging of the events. The effort is noble, if not entirely successful. 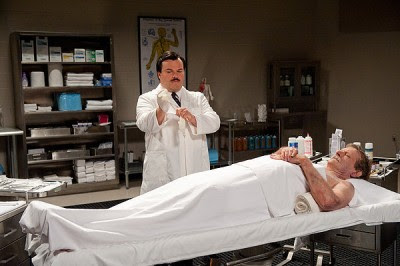 Black is amusing and restrained as Bernie, a religious-minded funeral director who, by all accounts, took his job seriously and extended generosity to the families he aided above and beyond the norm. He had a particular ability to get along with the older widows, and he managed to charm the uncharmable. Marjorie Nugent, who is played with particular comedic aplomb by Shirley MacLaine, was a pretty mean old woman. Her husband owned the local bank, and both of them were notorious misers. Bernie and her became friends, traveling all over the world together, though eventually Bernie became more of an on-call servant. As Marjorie grew more and more demanding, he snapped and shot her with the "armadillo gun."

Or so he says. The county district attorney, Danny Buck, thinks otherwise. Buck is played by Matthew McConaughey, whose big break was back in Linklater's Dazed and Confused [review]. McConaughey has traded that film's feathered hair and tight T-shirts for a bad wig and ill-fitting suit, yet he has kept all the cockiness. Buck is convinced that Bernie is more of an operator than he lets on. Their neighbors think Buck is the operator, that he's just an opportunist with a re-election campaign to manage. All the money Bernie spent while hiding the body was to help out his friends, and no one liked Marjorie much anyway. Where's the harm? 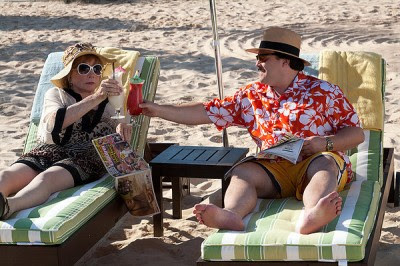 Bernie strikes a tenuous balance between macabre humor and gruesome reality. The down-home values angle is a bit of a trick. One gets the sense that Linklater wants us to have some sympathy for Buck, who, for whatever his flaws, would rather see the law upheld than distorted by some kind of misguided sense of charity. The problem is, the writing is too wishy-washy, never really coming down firmly on either side of the argument. It's almost as if Linklater himself was charmed by the folksy wisdom and forgot that it's not as imbued with common sense as the tellers seem to think. They con the filmmaker, even in absentia, as much as Buck believed that Bernie conned them.

The other problem with Bernie is that, like its main character, it's almost too nice. The storytelling is elevated by a genial comic touch, and I never got the sense that Jack Black is making fun of the man he's portraying; at the same time, I started to wish everyone involved would stop being so damned polite and start getting more invasive. We never get to really know Bernie Tiede, we never figure out what makes him tick. Sure, there are segments questioning whether he and his victim were ever romantic or if he was actually gay, but these notions are treated as so silly as to almost be immaterial. It's quite possible that Tiede's mercurial personality is what makes his story so fascinating, but if that's the case, that's something the film needs to own up to. Danny Buck almost touches on it in his closing arguments, but then Bernie shies away again.

Linklater has made a movie that is hard not to enjoy, but it's also equally hard to love. I like a lot of what he has done here. Playing the fake documentary element with such a straight face while at the same time letting the dramatization be more loose and carefree is kind of an interesting take on the genre--though, if I'm going to watch a mockumentary about a delusional theater person in a small rural town, I'm going to go with Waiting for Guffman. It's a better film. The kind of better film Bernie should have been. Instead, Bernie's just all right. 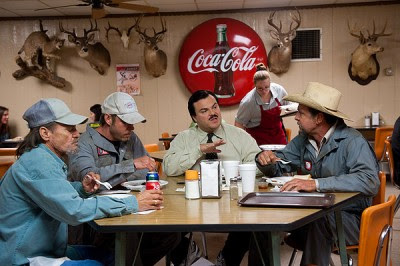