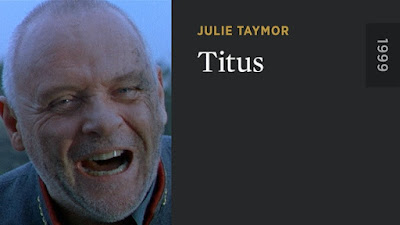 Imagine a time when we all thought Julie Taymor was going to be a bold, important voice in world cinema. It wasn't that long ago. In 1999, she was the heir apparent to Baz Luhrmann, a mad-hatted Kenneth Branagh with a grasp of classic drama and a vivid aesthetic that combined art house gravitas with midnight movie hallucinations. She had come off a successful, innovative stage adaptation of Disney's Lion King to direct a film version of one of Shakespeare's least known and oddest plays, Titus Andronicus, shortened here to Titus. It's bloody and melodramatic and twisted and mythical and Taymor's envisioning of it is magic.

Anthony Hopkins stars as Andronicus, a Roman general who returns home a champion after defeating the Goths. He brings their queen, Tamora (the fiercest Jessica Lange you ever did see), and her sons as tribute to the newly crowned emperor Saturninus (Alan Cumming), but when the ruler is denied Adronicus' daughter Lavinia (Breaking Bad's Laura Fraser) as a bride, things go south rather quickly. Lavinia is betrothed to Saturninus' younger brother Bassianus (James Frain, True Blood). The spiteful and spurned Emperor marries Tamora instead, setting the stage for the vengeful queen to turn her attention on Andronicus' family and, presumably, Rome itself. 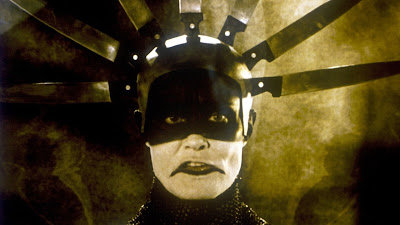 Titus is a bizarre play, full of extremes. Villains rage hard and the wronged wail in unquenchable pain. Bad deeds are undertaken with a dark imagination. Tamara's sons (one of TV's most recent Draculas, Jonathan Rhys Meyers, and star of The Americans, Matthew Rhys) are depicted as animals straight out of a 1980s heavy metal video, and they visit unspeakable horrors upon Lavinia. Tamara's lover Aaron (Harry Lennix, Dollhouse [review]), a Moor amongst the white aristocrats, schemes and plots and double crosses, all the while remaining unrepentant. (Lennix is amazing in his final scenes, spitting vitriol all over the screen.) The biggest perversion, however, is saved for Andronicus, who cooks up something wicked for his tormentors.

Taymor doesn't shy away from the grotesquery, nor does she iron out Shakespeare's more clunky plot devices. Severed heads and limbs are common props, and in one crucial scene, Tamara and her sons disguise themselves as Revenge, Rape, and Murder personified in order to make Andronicus think he is hallucinating. Taymor outfits them in goofy costumes, entering the scene via one of her gonzo interstitials, playing on the dark humor and absurdity with a relish few filmmakers could manage. Her overall approach is to push everything as over the top as possible, blending timeframes, cultures, and techniques to create an elaborate costume ball. The production team, which includes the great Dante Ferretti (Fellini's Satyricon), worked overtime to pack every scene with detail. Like Peter Greenaway's The Cook, the Thief, His Wife, and Her Lover, you are expected to gorge yourself on everything you see, and to emerge from the viewing exhausted. 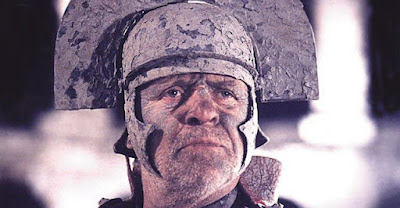 Titus is still quite fantastic. Some of the special effects show their age, but even those work because they come off as stagey and rickety and play like a nod to the tale's theatrical origins. As indulgent as it sometimes can be, and with the bulk of the original text intact, Titus is still engrossing and far from feeling bloated. Though nearly three hours long, it passes in a blink.

Julie Taymor went on to make the middling biopic Frida a few years later, before helming the terrible bomb Across the Universe and her now infamous Spider-Man musical on Broadway. The Tempest [review], her 2010 return to Shakespeare, showed she could curtail some of the excess the had overtaken the preceding productions, but the movie possesses little of the vision that makes Titus so vital and invigorating. It remains to be seen if her film debut was just a fluke--she may still have another trick up her sleeve--but even if that's how things turn out, what a hell of a fluke it is.

Nice article I agree with this. Your blog really nice. Its sound really good. I request you warmly, please, don’t ever stop writing. 안전놀이터