This review was originally written in 2014 for DVDTalk.com. 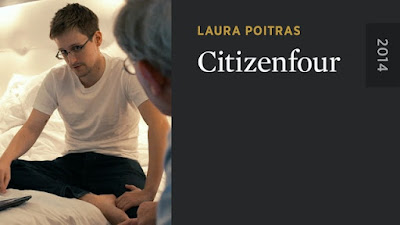 As I type, it's a week before Halloween, and I've just finished watching the scariest horror movie of the season: the Edward Snowden documentary Citizenfour.

It's with a chilled quiet and gritted teeth that I make light, whistling by the graveyard, dancing to keep from crying. Because if you can watch Citizenfour and not be shaken down to your very core, you're made of tougher stuff than I. Cinematic analysis at this point seems unnecessary, regardless of how much there may be to criticize in the technique (and really, not much). Laura Poitras' film is so vital, so substantial to the world right now, any conscientious critic will just want to underline how important it is that everyone see it, how crucial to avoid throwing it on the scrap heap of the well-meaning political and activist documentaries that have flooded the market since 9/11. Citizenfour is an historical document of confounding significance. It's a glimpse behind the closed doors of a moment in time that has otherwise only been revealed in the abstract.

Poitras, who previously made enough of a splash with the movies Flag Wars and The Oath to earn a place on a U.S. government watch list monitoring her travels, is one of two journalists, along with The Guardian's Glenn Greenwald, to be contacted an anonymous source called himself "Citizenfour" in late 2012/early 2013 regarding access to information that would implicate the White House, the NSA, tech companies, and a variety of other American institutions in an overreaching initiative to mine the privacy data of the common populace. That source was, of course, Edward Snowden. Citizenfour shows how that communication transpired, leading to the fateful meeting with Snowden in Hong Kong to go over the documents he had procured and prepare a plan for releasing the information to the public. This is the core of Citizenfour, and the actual timeframe is only a couple of weeks. Given the ongoing ramifications of the event, it's kind of crazy to be reminded how quickly it all happened. Poitras follows the exposure and the aftermath, chasing the ripples Snowden made right up until this past spring, when likely she had to put a cap on it and take Citizenfour into the editing suite. The narrative she shapes from the combined recording of the reportage and of the evidence being reported has the tension of a high-grade thriller but also the damning effect of being true.

There are two takeaways from Citizenfour. First, Edward Snowden is a fascinating and admirable individual. Regardless of smear campaigns in the press or the Obama administration's attempts to recategorize his whistleblowing as treason or espionage, Snowden in action--at least as presented here--is forthright and articulate regarding his intentions. He simultaneously attempts to keep the story from being framed around him and accepts not only that it will end up that way, but that the consequences will be severe. Poitras is careful to show his humanity, at times catching unguarded vanity, but also real sadness. In those days when he literally only had one single window from which to view the whole world, most of us would have found it hard to keep our resolve from being crushed. When Snowden is the most likable is in those rare moments when he is most normal, when the stereotypical IT guy emerges to snicker at his allies for being such rubes when it comes to technology.

The second takeaway is that the American public's casual acceptance of the exposed truths as both inevitable and, frankly, already here, is just as damaging, if not moreso, as the government's most nefarious actions. It's almost another horrific joke to consider how unnecessary the scrambling over the leaks and the attempted discrediting of Snowden was. With a citizenry that has already accepted that there is nothing they can do, no retaliation need be required. Hell, there is no more disheartening evidence to verify Snowden's fear that one man's efforts wouldn't be swallowed whole by the culture of celebrity than, as of this writing, the one piece of trivia on Citizenfour's IMDB page is about his sexuality. (Yes, there are certain aspects of Snowden's personality that Poitras could have explored to challenge the would-be assassination of his character, but to expect her to is to miss the point of her stated approach.)

I'd like to believe it's not too late. Horror movies usually end on a new morning, right? The survivors getting out of the haunted house? Citizenfour can't provide that sunrise, so instead it ends on the promise of an even more haunting revelation to come, presumably to encourage the rest of us to make that new dawn occur before there is no turning back and all sense of freedom and privacy is lost. Which is why I can't stress enough how everyone must see this movie, and why my fingers are permanently crossed in hope that it works. 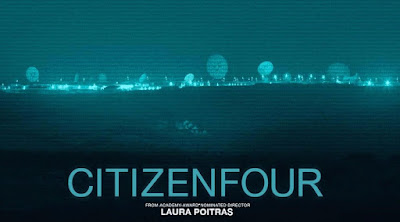