This review was originally written for in 2007 DVDTalk.com. 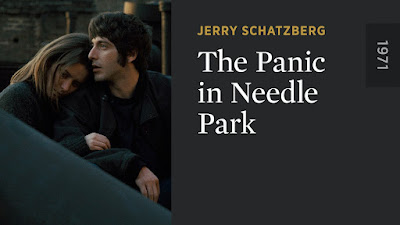 Needle Park was a real area in New York City where junkies congregated, forming their own city within the larger city, getting by on the hustle and the routine of cop/shoot/cop. The Panic in Needle Park is a 1971 film about this area, adapted from a book by James Mills. It's written by two of the finest writers in journalistic literature at that time, Joan Didion and John Gregory Dunne, and they apply the same feeling of honest reportage that had earned them their reputation to this screenplay. From there, director Jerry Schatzberg (Scarecrow, Honeysuckle Rose) picked up the gauntlet and shot the movie in a verite style that anticipates the hand-held documentary approach cop shows like Homicide: Life on the Street and NYPD Blue would use two decades later. This makes The Panic in Needle Park a raw, honest film about the junkie lifestyle, and how love can be corrupted when it burns in the center of a heroin spoon.

Al Pacino plays Bobby, your standard hustler who spends his days kidding others in order to keep telling lies to himself. When we first meet him, he's slinging marijuana and claiming to only be shooting up occasionally. Helen (Kitty Winn, The Exorcist) is the sickly girlfriend of one of Bobby's customers (Raul Julia), and during one of her many stays in the hospital, the boyfriend runs out on her. Acting on unspoken affection, Bobby picks her up when she's discharged, and from there, a love affair quietly begins.

Things start easily enough, and it would seem that Bobby gets by pretty well. The addicts form their own little community, and amongst them, he appears to have his feet firmly on the ground. He's definitely a charismatic guy, and how could he not be? He's played by Al Pacino, for gosh sake. His manner draws Helen in, probably because she lacks any consistency in her own life. We don't know what happened to her to make her this way--both characters pretty much start at ground zero and don't speak of the past--but the two fit in a way that you don't often see in even straightforward love stories.

Eventually, though, Bobby is going to push the boundaries of their relationship. The crucial scene comes when he asks Helen to go uptown and score for him. She looks him dead in the eye and calls him on it: he's testing her to see what lengths she'll go to in their relationship. It's shortly after this that she tries heroin for the first time. Helen never explains why she sneaks a hit from Bobby's stash, but it's presumably to be closer to him. It's the one thing he cares about more than her. He won't even make love to her when he's stoned. It's like she's conquering the mistress by taking her to bed.

The Panic in Needle Park is told in a loping matter, the plot coming in great big chunks like an asteroid storm rather than a carefully arranged line. It's an ambling gait, though, and never a rambling one. The illusion is that it's accidental, when really the writing and editing is very precise. Realism is the order of the day. Schatzberg doesn't come off as an assertive director, his style is too natural, and he lets his actors be natural. It's one of those movies where the people seem to just exist on the screen rather than a collection of actors performing. It was only Pacino's second movie, and he already looks at home on camera.

This naturalism is a bit of a sucker punch for the audience, because it allows Schatzberg to sneak the more harrowing elements into the picture and catch us off guard. The drug scenes are casually gruesome in a way that is chillingly effective. There is no exploitation of the drug culture in The Panic in Needle Park, no romantic images of junkies getting off and having a grand time. Whenever we see a needle breaking skin, it's usually penetrating a scabrous or bruised vein, and the stupor that follows is anything but attractive. Likewise, when the random outbreak of violence enters into the scene, Schatzberg makes sure we feel the impact of it, as well. His on-the-spot shooting style suddenly grows more manic, moving in tight on the action, often losing focus altogether. It makes those moments seem more vicious, like there was no way to stop them. 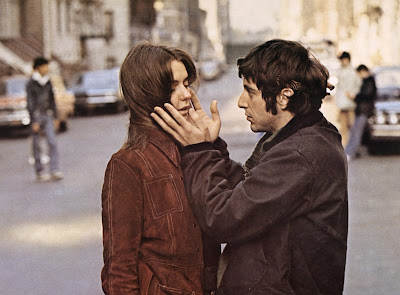 The Panic in Needle Park grows more grisly as it goes. The "panic" referred to is actually a term for a period of time when there aren't a lot of drugs on the market. It makes people desperate and forces them to turn on each other. For Bobby and Helen, that means finding new ways to score. They tend to choose opposite directions for how to get ahold of their junk, and it will be the test of their relationship if they can stay together. Didion and Dunne avoid moralizing, and they mainly avoid being heavy handed about the more extreme consequences of addiction. (I say mainly because bringing that puppy into it, guys, steps close to the line.) The downward slide is disconcerting enough without also giving us the loud thump of the couple hitting rock bottom--which is also probably why the movie still feels fresh and timely after all these years. The Panic in Needle Park is as much about the relationship as it is the habit, anyway, and the writers serve both masters well. The movie ends with a perfect little snippet of a scene, striking the right kind of resonance, saying it all without having to say too much. 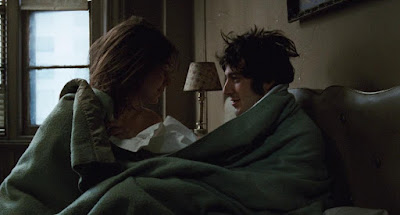