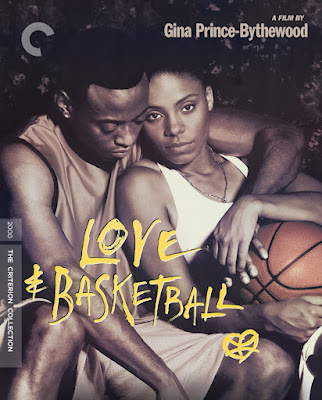 When Criterion announced they were releasing an edition of Gina Prince-Bythewood’s 2000 film Love & Basketball, I think a lot of people were surprised. But it wasn’t all that shocking if you’d been paying attention over the last couple of years. Love & Baskeball had been bubbling up through the public consciousness, a sleeper hit ready to rise, a perfect example of how a familiar tale can feel fresh again when filtered through a unique point of view and featuring underrepresented faces.

It’s easy to surmise how Love & Basketball maybe slipped by on original release. Setting other cultural factors aside, there is just something so simple and direct about this film it was easy to underestimate. Starting with the title. It’s pretty plain, and so lacking in ostentation, one might think that is all there is to this film. What’s it about? It’s about love. And it’s about basketball.

And it’s on us as an audience for thinking that’s not enough. 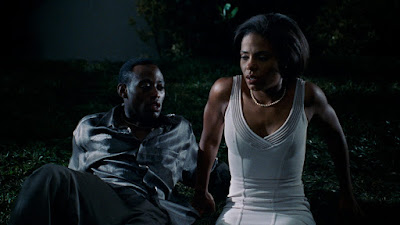 Because sure, Prince-Bythewood’s feature is about those two things, but it’s also about how the necessary (love) often clashes with the important (basketball), especially when the two people falling in love are so focused on that one important thing.

In this case, those two people are Monica and Quincy, played at a young age by Kyla Pratt and Glenndon Chatman, and then for the rest of the film by Sanaa Lathan and Omar Epps. We follow them across many years, structured into four quarters just like a basketball game: their first meeting at age 11, their senior year in high school, freshman year in college, and then adulthood, looking at the early flushes of success and grown-up disappointments that divide and unite. Which sounds like not very much but it’s really a lot, particularly as we consider the dynamics of gender as it pertains to sports and then how the unpredictable nature of the game can disrupt happy feelings. 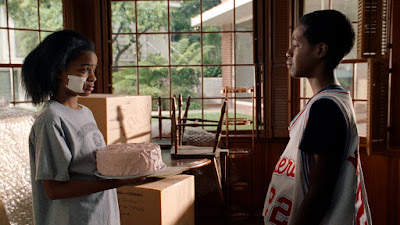 Even forgetting all that, though, any relationship story is about human complications, and that’s what Love & Basketball has an abundance of. Parental issues, jealousy, doubt, injury, sacrifice, distraction. In some ways, Monica and Quincy are heading in the same direction, and in others, they can’t see how many obstacles will cause their paths to diverge. What makes these two stand apart from your usual rom-com or dramatic leads, though, even when they are childishly teasing one another, is how kind they can be, how present. Fundamentally, we can see on the screen how connected they are, and even when they mess up, Prince-Bythewood’s script isn’t afraid to dig down into the messiness of it all and grapple with real emotions.

Of course, any romantic movie is dependent on the chemistry between its two leads, and while Epps is the better actor here by a noticeable margin, Lathan really comes alive when they are working together. This again lends to our investment in them as a couple, and the believability of their love affair. Something about the two of them together brings out the best in one another, the way a great relationship, working or otherwise, should. 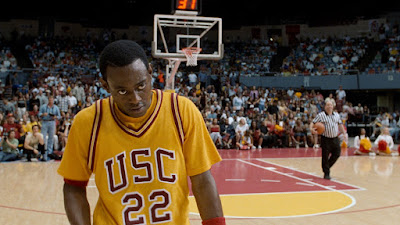 Though, that does bring up the one flaw I’d say Love & Basketball has: it’s not that great when it comes to the basketball. The games we see are not very exciting, and the practice sequences don’t communicate the fire that would drive young players to give it everything they have. The crucial games are almost an afterthought, with a lot of action taking place out of frame. Which might seem like a small note, but we are supposed to believe that this pair is exceptional and wanting to see them succeed should be paid off by actually showing the triumph happen, not just the tragedy. 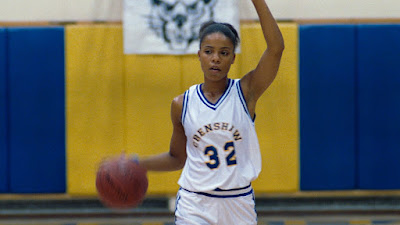 There is a similar problem—and some similar success—in Prince-Bythewood’s 1991 short Stitches. The story of a struggling female comedian suffers as most movies about stand-up comedy do from completely tanking the comic scenes. The material just isn’t funny, particularly as Prince-Bythewood bends the jokes to match up with the trauma the comedian suffered in the past. It’s a solid concept, with the comedy acting as the basketball did in Love & Basketball, giving the character something to focus her life on, acting out a kind of therapy on stage. Once again, the real-life emotion is stronger than the outside pursuit, but Prince-Bythewood manages to get close to the bullseye in bringing this complex character to life. (1997’s Progress is also included here, the director’s short juxtaposing 1967 racial violence with 1997 black-on-black crime.)

It’s interesting to see the early thematic seeds and storytelling techniques spread across nearly a decade, and how much Gina Prince-Bythewood has figured out by the time cameras rolled on Love & Basketball. The drama is not perfect in every way, sure, but it doesn’t have to be, not when the observations are so fresh and the romance so real. Also, don’t be surprised if you find yourself seeking out Spotify playlists featuring the songs from the soundtrack. Sonically, Love & Basketball provides a well-chosen journey through two decades of R&B and hip-hop. 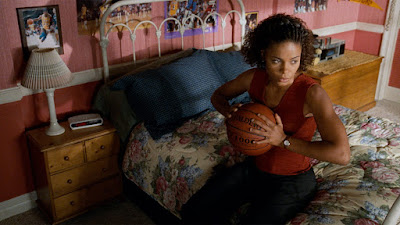 This disc provided by the Criterion Collection for purposes of review.
Posted by Jamie S. Rich at 1:00 PM