This review originally written in 2011 for the film's 20th Anniversary, and was posted at DVDTalk.com. 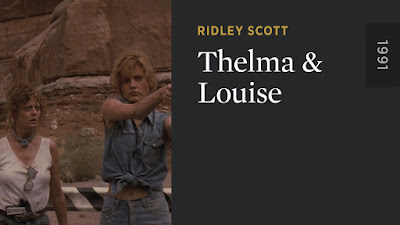 In the 20 years since I first saw Thelma & Louise during its original theatrical run, there is one scene that I always return to. It's a very short sequence, it could almost be dismissed as throwaway connective tissue, but in my mind, it speaks strongly to the soul of Ridley Scott and Callie Khouri's road-movie western. It's during a brief pit stop, the titular fugitives have pulled off the highway to take a bathroom break and clean up. Susan Sarandon, playing Louise, washes herself in an outdoor sink and, seeing the old man who lives in this roadside shack, she goes over to him, removes all of her jewelry, and puts it in his hand. It's a silent interaction, there is no dialogue or explanation given. Yet, one can take so much away from those few frames. In one light, it is a compassionate moment. Louise is paying this man, who has likely seen some hard times judging by the lines on his face and the faraway look in his eyes, to thank him for the respite he has provided. It also proves she hasn't given herself completely to crime, she won't rob those who can't afford it. In another light, Louise is shedding her earthly connections, rejecting the material world and accepting a fate that is becoming all-too inevitable.

It's not just the best scene in an otherwise rollicking movie, it's one of Susan Sarandon's finest screen moments. It's the actress at her most raw. She is vulnerable and sweet and, a rare thing for us to see in big-budget Hollywood movies, at rest. It's an oasis of peace in the middle of a movie where a bullet from a pistol can blow up an oil tanker.

And yes, it really has been two decades [now three!] since Thelma & Louise was a well-deserved big hit at the box office. The film is a perennial now, something we have become comfortable with, even though the dimwits who run the American film industry are still scared of the idea of kick-ass women headlining their own kick-ass movies. Thelma & Louise casts the dream team of Geena Davis as Thelma, an Arkansas housewife kept underheel by her domineering jerkwad husband, and Susan Sarandon as Louise, a bold-as-brass waitress who has seen her fair share of disappointments. 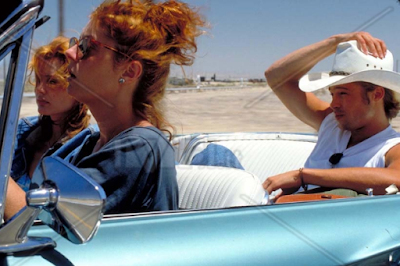 The story begins as the girls set out for a weekend at a cabin in the mountains. Thelma decides not to get her husband's permission, he's not going to give it anyway. (Darryl is played by Happy Gilmore's Christopher McDonald, who has made what is probably a pretty fun career out of playing energetic sleazeballs.) For her, this three-day vacation is all about letting go and embracing life, to finally unleash everything that is inside her. For Louise, it's somewhat the opposite, though similar. The trip will become her opportunity to bury the past, to get over old mistakes, and accept the disappointments life has handed her.

The journey takes an unintended detour after an unscheduled bar stop. Thelma has too much to drink, and a local scumbucket (Timothy Carhart) tries to take advantage. Louise steps in, one thing leads to another, and Louise shoots the rapist. Convinced that no one will believe their story, the ladies hit the road. A series of mishaps and crimes follow, including running across a thieving drifter (Brad Pitt in a breakout role) and getting a sympathetic cop (Harvey Keitel) on their tail. Thelma & Louise is essentially a modern take on an outlaw western, two anti-heroes on the run like a feminist Butch and Sundance. With each obstacle they overcome, with each new "bad deed," they come into their own. By the end, they are seasoned gunslingers and as gutsy as any frontiersmen in a leather duster and ten-gallon hat ever was. 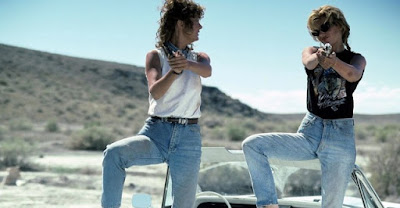 Thelma & Louise represents the last of vintage Ridley Scott for me. While the director has had some good movies since--usually his "smaller" pictures, such as Black Hawk Down and Matchstick Men--his run in the last twenty years never quite achieved the immediacy or creativity that made his 1980s work so exciting. His bloated Christopher Columbus biopic, 1492: Conquest of Paradise, was to follow a year later, and its failure inspired a four-year gap that would eventually be broken by the little-seen White Squall. His box office successes since have tended to be overdone historical epics or convoluted modern thrillers marred by an unyielding visual style. Thelma & Louise stands in direct opposition to this. The storytelling is lithe, and the bright and breezy cinematography by Adrian Biddle (V for Vendetta) eventually embraces the majesty of the road picture, drinking in all the wonderful sights of the American Southwest alongside its two heroines. Maybe it's fitting that the most over-the-top scene in the movie is the explosion of that oil tanker. It's ridiculously out-of-sync with the "reality" of the rest of Thelma & Louise, yet it serves its purpose: it's the signal flare that the ladies are leaving everything about their safe lives back in Arkansas. Maybe it's also Ridley Scott's demolition of all that came before, a last moment of whimsy before he hunkered down for the more calculated career that was to come. 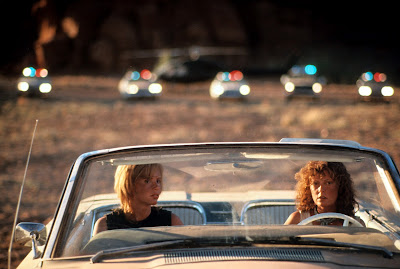 Of course, if we're going to push that kind of meaning onto Thelma & Louise, then it might be just as fitting to suggest that the ending of the movie, which I guess some would consider controversial, is more of Scott's final leap into the creative unknown. I think it's a rather perfect ending to the film, I can't imagine why anyone would be upset (the extended version that's been out on its various digital video releases would have really given detractors something to crow about). Again, Butch and Sundance are a pretty obvious comparison, but I'd like to toss out a different one: Grease. At the end of the musical, Danny and Sandy take flight in their convertible, presumably on their way to some kind of bliss in cinema heaven. Given where Scott ultimately chose to fade out in this leap, there is no reason not to take it as a Kierkegaardian metaphor. Thelma and Louise never land, they soar off toward immortality. The fact that there is now a 20th Anniversary Edition would certainly suggest they've achieved some level of timelessness. Thelma & Louise is still as fresh and unpretentious as it ever was, despite the fact that it seems to be on TV at least once a week. It's the kind of moviegoing vehicle that's tires will never grow threadbare. 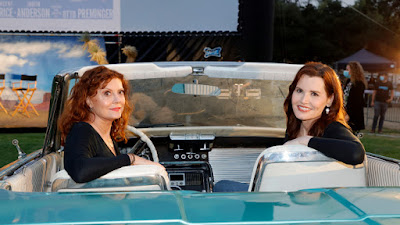