"And when I'm lying in my bed
I think about life and I think about death
And neither one particularly appeals to me.”
- The Smiths, “Nowhere Fast” 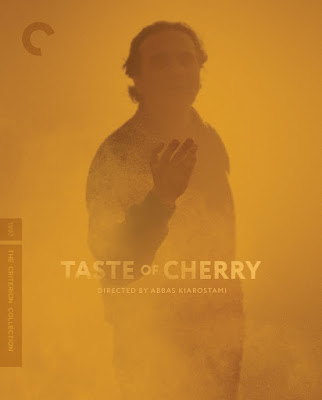 People don’t like to talk about suicide. They just don’t. They barely want to talk about death and the afterlife as it is; therefore, you know if you’re bringing up ending your own life, it’s going to get uncomfortable.
So Mr. Badii (Homayoun Ershadi) quickly finds in Abbas Kiarostami’s 1997 Cannes-winner Taste of Cherry. Hell, he doesn’t even want to talk about it. He doesn’t wish to share his reasons for getting out, he just needs a practical hand to double-check that he’s carried it through. And thus he drives through Tehran looking to hire someone dependable. He tries three men--a rookie soldier (someone who just does the job), a religious scholar (a man of philosophy and ethics), and a taxidermist (the preservation of the deceased)--all of them immigrants--a Kurd, an Afghani, and a Turk--presumably chosen as such to display Kiarostami’s acknowledgement of a universal experience. We are all passengers on Spaceship Earth. 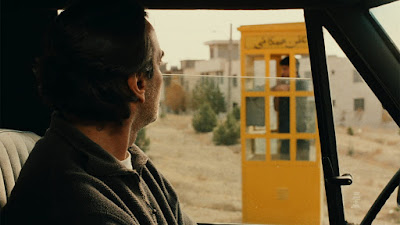 Badii’s proposal is simple. He has picked out a spot and dug a hole to lie down in. As night falls, he will take all the sleeping pills he can swallow and go to sleep in the hole. At dawn, the man he hires shall go there and call his name. If he does not rouse, the fellow just needs to bury him and a good sum of money will be waiting. Seems easy enough, but the proposition causes reactions. The soldier is scared, the scholar concerned, and the older man, the taxidermist, resigned. Through their responses, Kiarostami crafts a debate around the notions of self-determination and our duty to others, both in terms of what Badii’s actions might mean to those around him and  the potential helper’s duty to stop their fellow man from inflicting harm. Ironically, Badii doesn’t recognize the most concrete example of man’s kindness when he drives his truck off the road and nearby workers rush to push him out of danger. Presumably, there could be relief should he choose. Or is his problem truly without solution, as he would suggest? 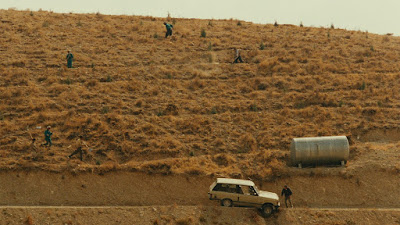 Though Taste of Cherry is a movie that thrives on conversation, it is also a film of perpetual motion. A vast majority of the picture’s running time takes place in Badii’s truck as he drives around looking for candidates and then pitches them the plan while taking them out to see where his final resting place is intended to be. This, one can assume, is Kiarostami’s metaphor for life, or at least a representation of how Badii feels about it. Life never stops, there is no rest. The closest Badii gets is a poetic scene where he sits down amongst the rubble of a quarry and watches dirt and rock be churned and ground down. Kiarostami stages the sequence as a kind of shadowplay, the dusky image of the rocks covering the shadow of the man, foreshadowing the peace waiting for him in just a few hours. I think it may be the only time we see Badii smile. In truth, he’s kind of a prick, and his secrecy makes it hard to empathize with him; it’s only in these moments, as emotion shows through, that we find an individual we can sympathize with. When roused from this reverie, Badii will not rest again until his deal is made. 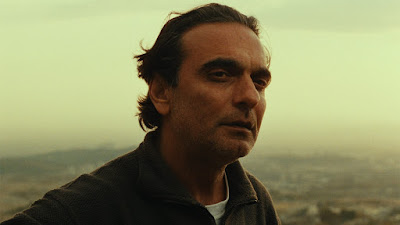 Kiarostami has very much crafted a film here. Taste of Cherry is as rich in visual splendor as any other narrative film with a more complicated plot. The story here is small, but the world is expansive, as we are constantly reminded by the camera’s regular positioning outside the truck. We peer down from the mountains, from the godly perch of the audience, and see Badii driving through the hills, see the towns beyond. We aren’t just with him when we are in the truck, but we are observing him as he moves through the day. We are aware of his place in some kind of ecosystem, and privy to his impact on it. When Badii leaves a man, we do not, we get to stop and see their thoughts the moment after he exits their lives. It works just like any other movie, even if its tale is not standard Hollywood fare.
Which almost makes the coda of Taste of Cherry unnecessary. When Kiarostami exposes the crew, shows us the actors and the cameras at work, he reminds us that this is a motion picture, that no one actually lived or died. Which, we are smart people, we know this. Yet, Kiarostami wants us to stop and think about it, to question how and why we engaged. Much like in his experiment with showing reactions and not the movie being reacted to in Shirin [review], the Iranian director refuses to let the audience be passive, or to leave Badii behind when the lights go out...and come back on. 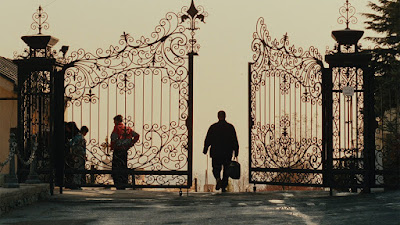 Sticking to that theme, Criterion has included a short film called The Project that shows Kiarostami’s process, cutting together footage where he acts out scenes with his son followed by clips of him directing those same scenes with his actors. The raw material shows how passionate Kiarostami is about getting to the truth, and is reminiscent of similar films with Ingmar Bergman, particularly The Making of Fanny and Alexander [review]. It’s amazing to see how the auteur finds the spontaneity in repetition.
A quick note regarding the new Blu-ray of Taste of Cherry: as a Criterion release with a very low spine number, Cherry was overripe for an upgrade. I’m happy to say that the new 4K restoration has done wonders for the picture quality. The image is sharp and vibrant, full of nuance and detail. Viewers in 2020 and beyond can see all the aspects of that wide world Kiarostami is looking to show. 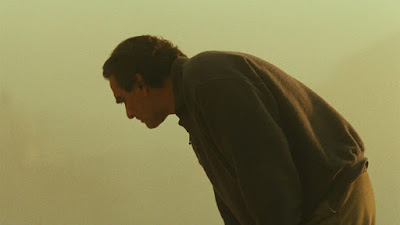 Guests can also enjoy a Non-Smoking High Limit Slots space. You had been born prepared, so hit the slots on our spacious on line casino ground featuring over 1,600 of your favourite .01, .25, $1, and high limit slots. Take an opportunity on a successful spin because of|as a end result of} if you are 메리트카지노 having enjoyable you’ve already gained at Red Wind Casino. Below we’ve listed a few of the the} benefits of taking part in} slots for actual money. Start having an incredible expertise at an online on line casino as you make protected and quick deposits. The most trusted casinos will provide multiple of} in style deposit methods, keeping your non-public data safe.