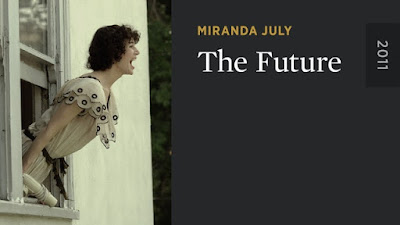 Man, I'm like...what?
There are times when this job is just a pain. When I probably would have stopped a movie before it was done and just walked away. When I can't, and so I have to instead come into my office and try to figure out something to say, and it's just not there.
The Future has inspired one of those times. It's the new film from performance artist/author Miranda July, who made half a good movie back in 2005 called Me and You and Everyone We Know. That movie chronicled the twee romance between two average people and the growing pains of a pair of children, and it had moments of true insight (the kids) and other moments of contrived oddness (the romance). But it was all right, nothing too baffling, nothing too unctuous.
July's sophomore effort is a whole other matter. The ratio of what works to what doesn't has gotten a lot more lopsided, and though I wouldn't call The Future bad, it does lack focus and seasoning. 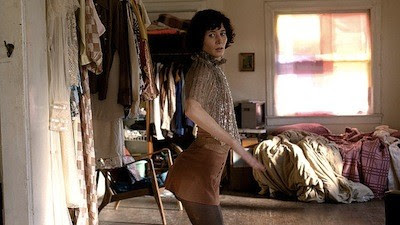 The script portrays a couple in their mid-30s who have decided to adopt a stray cat they have found. They named it Paw Paw and took it to an animal shelter where it is being treated for its hurt front paw (I guess that's where they got the name) and other health problems. At first they were told that Paw Paw would only live six months, but now the vet says it could be several years if they take care of it. So, instead of six months of adult responsibility followed by a lifetime of freedom, the couple sees the thirty days they have to wait for Paw Paw to be healed enough to come home as their last month to live. Jason (Hamish Linklater from The New Adventures of Old Christine) decides that they need to go nuts now and sow any remaining wild oats before they become parents, so he quits his tech-support job answering distress calls in their apartment and encourages Sophie (July) to give notice at the dance school where she's an instructor. Having loosed the shackles of employment, they can do anything they can dream up.
Except they don't dream big. Jason volunteers for an environmental initiative selling trees door to door; Sophie decides to record a dance a day for the full thirty and upload them to YouTube. As it turns out, Jason isn't cut out for sales and Sophie isn't very creative. So, he pretends to go to work and instead spends the day with an old man (Joe Putterlik) who turns out to be himself from the future while she sneaks out and has an affair with a single dad (David Warshofksy) they randomly met at the vet. 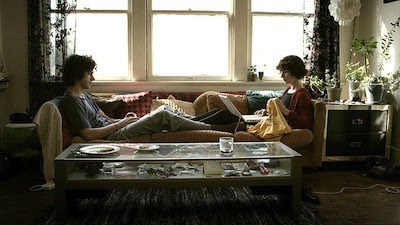 Yeah, you read that right. Jason meets himself from the future. There are funny things with time in this movie. There are also scenes where the cat Paw Paw speaks to the audience, explaining his (her?) changing life, anticipations, and disappointments. Surprisingly, these are the best parts of The Future. The tricks Jason pulls make for a neat pay-off, bringing up questions about fate and how much of our lives we waste and what it might take to wrest control back from the universe. Even the talking cat is endearing, despite the voice Miranda July gives Paw Paw being pretty damn terrible. You can forgive her lack of vocal chops because it's kind of cute and, somehow, the cat ends up being the most emotionally honest character in the whole film.
The rest of The Future, however, is pretty underwhelming and tainted with a forced oddness. July seems desperate to maintain a labored indie cool, which maybe she could do if she were a better actress. The writing is fairly sharp, but her affected screen presence is tiresome. Hamish Linklater spends the entire movie outclassing her, and it gets embarrassing. He is so natural and heartfelt in front of the camera, you can't help but wish he were in a different movie. It's like July keeps trying to push The Future one way and no matter how much her lead actor points her the other way, she refuses to listen. Even the music by Jon Brion (Magnolia, I Heart Huckabees) is overly contrived, nearly spoiling the movie's most surprising scene by spreading a sickly organ underneath. 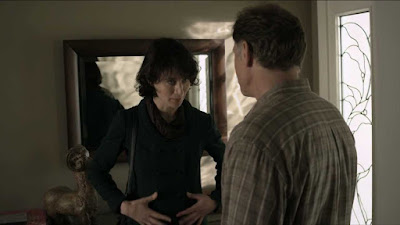 There's a Pet Shop Boys song called "Being Boring" where, essentially, they play with the old phrase that if you're never boring, you won't be bored. It came to mind a lot while watching The Future. Sophie and Jason are people who don't really do anything because they aren't very interested in what they set out to do. I suppose this is Miranda July's point: they don't know what they want, and the movie represents a divide between their purposeless younger lives and what may possibly be a new beginning. Or not. She goes back to bed, he sits and reads a book, that's not very interesting either. It's ironic, but ennui needs more flair than this. The Future lacks any pronounced style, and its magical moments have the same drab look of the everyday life that makes up the rest of the picture. If you're going to be weird, Ms. July, be weird, don't settle on quirky; if you're going to track your characters crawling out of their boredom, shoot it like you care. Or are at least trying.
Because it makes it hard for me to care or try when you don't. And it makes it not just hard to start reviewing your film, but also hard to finish. I've come up with a lot to say, but no clever way to wrap it up, no cohesion. Call it "giving as good as you get."
Posted by Jamie S. Rich at 12:20 PM