This review originally written in 2008 for DVDTalk.com as part of The Stanley Kramer Collection. 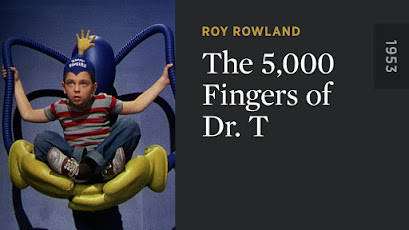 For this early production effort from Stanley Kramer, the pioneering producer enlisted the burgeoning talent Dr. Seuss to pen a surreal children's story about a young boy, Bartholomew Collins (Tommy Rettig), who hates playing the piano so much, he dreams of a world where his piano teacher, the nefarious Dr. T (Hans Conreid), is starting an institute where he will enslave 500 young boys and force them to tickle the ivories 24-7. Not only does this dream take on the childhood anxiety of being stuck in a life of boredom, it also addresses Bart's familial loneliness, imagining the nice plumber (Peter Lind Hayes) who has been working in his home as a father figure who will rescue Bart and his widowed mother (Mary Healy) from a life alone.

More of a cult hit than a children's classic, the clunky 5,000 Fingers of Dr. T is most remembered for its enormous sets and bizarre villains, which bring Dr. Seuss visions to life in an overtly physical way. Made decades before digital effects, the gigantic locations were all built by hand, and it's fairly obvious. Watching the movie, you feel like you could reach in and pound your fist on the colorful walls. This gives the film a certain quaint charm that makes it possible to look past the barely-there story and wooden acting. Also of note is Hans Conreid, ever so delectable as the villain. He's largely familiar from Disney movies, particularly as the voice of Captain Hook in Peter Pan. It's a real treat to see him ham it up as the diabolical piano maestro. 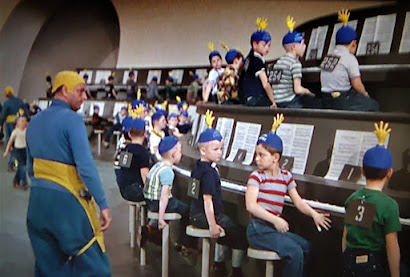 I loved this movie. Hans coneid is so talented. The acting was not wooden. It was perfect for the story. We didn't need overacting with unneeded emoting