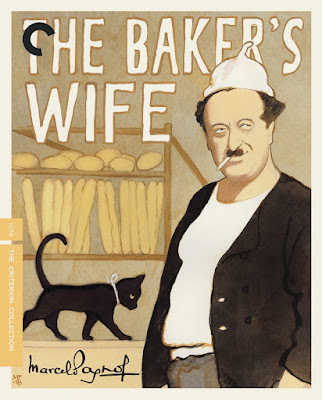 It’s funny to watch the 1967 taped introduction to The Baker’s Wife, in which writer/director Marcel Pagnol explains that the 1938 film was practically an accident. Written in haste to fill some time that had become available at his studio, in an effort to keep the place running and the staff employed, it blossomed from a makeshift short feature to a near-perfect full length. It’s hilarious and charming and a rather sharp document of human nature. 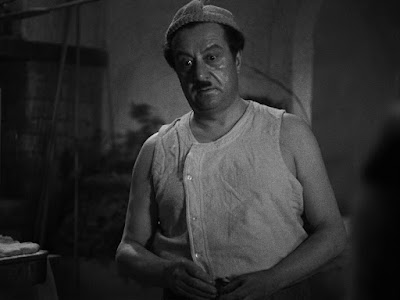 The great Raimu plays Aimable Castagnier, a baker who has moved to a small town. It’s his first day of his shop being open, and the locals discover that Aimable lives up to his name (“Amiable,” in English). He’s chatty, generous, and damn good at his job. He also has a gorgeous wife, a fact that just about everyone but the priest comments on. Aurelie (Ginette Leclerc) is indeed lovely, though also an enigma--at least to her husband. The woman does her job perfunctorily, without speaking, alternately appearing snooty and bored. As time rolls on, we’ll get a better sense that it’s the latter. Amiable consistently insists that she is not a sexual woman, not prone to base urges.

Is it any wonder then, that when the handsome shepherd (Charles Moulin) looks her way, she quickly jumps into his arms, hatching a plan to run away that very morning. (As if giving flesh to her moral choice here, she is weighing a basket of bread in order to get the count right for the shepherd’s delivery; balancing her current life in opposition to her next one.) This sudden departure leaves Aurelie’s chores undone, the most important of which is to wake Amiable when it’s time to take the first batch of bread from the oven. The bewildered husband wakes to a bakery full of smoke and a head full of confusion. As the townspeople realize what is going on, they see that the baker’s spiraling depression means they will go hungry unless they figure out how to get him his wife back. 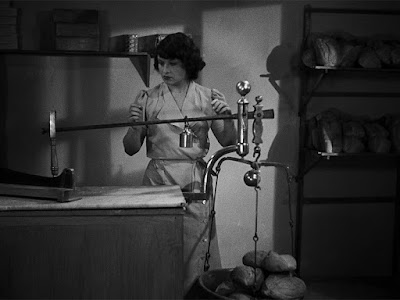 Raimu is a marvelous actor and Amiable is an equally marvelous character. He is likable and sympathetic, but also foolish and at times pathetic. Being much older than his wife, he lives in tribute to her, but also in denial of his own reality. That latter state has a strong hold on him, as he searches for any reason to explain where she has gone, anything other than her having jilted him for a field worker. Even as the mayor (Charpin), the priest (Robert Vattier), and Amiable’s most understanding friend (Charles Blavette) try to steer him in the right direction, he holds strong: Aurelie has not run away, she’s gone to visit her mother. The husband’s façade only starts to crack as the tee-totaler indulges in a bottle of Pernod--an absinthe-like, licorice-flavored drink that has to be cut with water--and gets absolutely soused. Raimu is easily one of the best onscreen drunkards. He convincingly stumbles over his feet and his words, changing moods on a dime, and singing in bastardized Italian, besting Adam Sandler’s Opera Man act by about 50 years or so. It’s here where you’ll fully commit to Amiable’s side, not matter how delusional he may seem or the foibles that got him to this place. He’s 100% vulnerable, letting it all show. 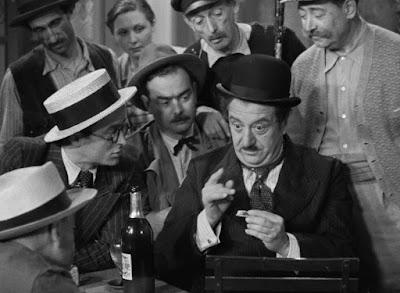 While it’s definitely Raimu’s show, The Baker’s Wife is rounded out by an impressive cast of characters, populated by the filmmaker’s regular acting troupe. Pagnol loves to depict provincial life, and his scandalous set-up allows for each individual personality to show themselves, both in how they interact with one another and how they react to the moment. For instance, the mayor is a libertine who lives with four women, his “nieces,” yet he is a friend to the priest, who alternately counsels the sinner and turns a blind eye. There is an aged spinster (Maximilienne Max) who still insists on her good looks, but who runs screaming the moment a man pays her attention. The wives cluck their tongues at the harlot, the husbands gently rib their jilted cohort, and yet everyone rallies around when it’s required. Work and community are the two important things in this town, and when the former is disrupted, the latter has to do something about it. This can make strange bedfellows. The populace is quickly shown to be up in each other’s business from the get-go, but feuds are quickly mended when it means hungry bellies. There is also the incredible image of the village schoolteacher (Robert Bassac) working with the priest, literally carrying him across a muddy river--intellect supporting faith--when earlier they had argued the validity of Joan of Arc’s “voices.” There is room for all! 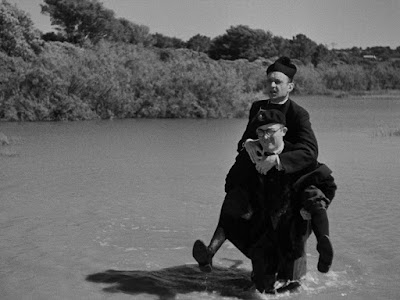 The Baker’s Wife is effortless entertainment. The story construction is tuned with a flawless precision, where all the pieces matter, yet without any one piece being so obvious it spoils or makes apparent its own later importance. Amiable’s missing cat or his zinging the addled fisherman Maillefer (Edouard Delmont) when in his cups may not seem important in the moment, but everything happens for a reason, and all those reasons pay off. Often with laughs, but also with empathy. 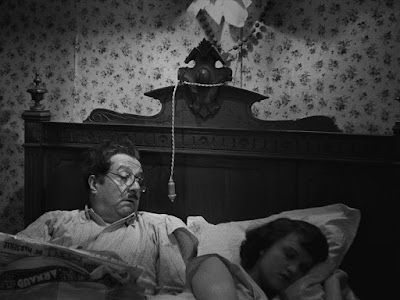 But the really big payoff is how much you’ll have your faith in human nature restored. Marcel Pagnol loves the species’ inherent contradictions, how we can be both selfish and selfless in the same breath, and shows how that is okay. Remember what it was like when we could all agree to disagree and move on? Likewise, kindness is not weakness, and buried feelings can come out even stronger for indulging one’s own good nature. The final scenes of The Baker’s Wife show Amiable at his best, while intimating his worst, and once again, you’re on his side, thinking, “Good for him.” Because regardless of everything else, the man never betrays his true nature. Even when it hurts him. Because if you listen to what he says about Aurelie, you realize that the guy isn’t really giving his wife her due. It’s likely from insecurity that he has allowed his marriage to become sexless--though, her agency may be in fostering this belief--but you can’t help but think he kind of drove her into the other man’s arms by denying her vitality.

Thus, kudos also to Leclerc for delivering in the moment, though I suppose it may be up to interpretation exactly why she is crying...it’s tough to make tears ambiguous, but she really does. 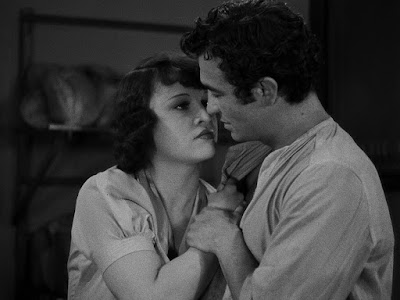 The 2016 restoration of The Baker’s Wife is impeccable, making the feature look brand new, and it shines here on Blu-ray. Extras on the disc aren’t big in number but notable for their quality, including a 1966 interview with Pagnol and a 1970s-era tour of the town where the move took place. 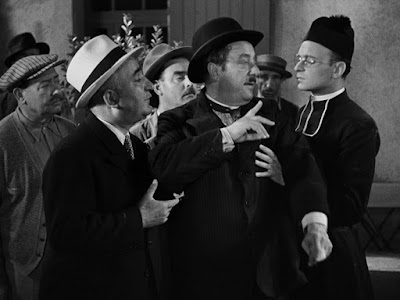