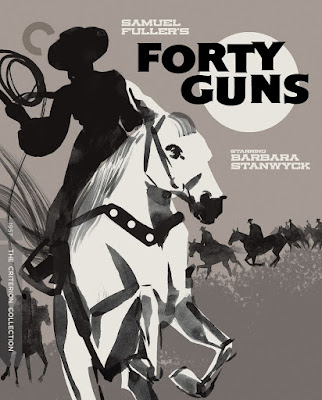 A rough and tumble western as only Samuel Fuller could make, 1957’s Forty Guns is the most macho feminist cowboy picture you’re likely to see. Opening with a visual manifesto--three men in their plodding wagon overtaken by a storm of horses, led by a black-clad woman astride a pure white beast--it’s clear from the start that a storm is coming, and it’s not going to be any dude marshalling its fury.

The three men are the Bonell brothers, law enforcement heading into Cochise County to arrest an outlaw wanted for federal robbery. Their eldest, Griff (Barry Sullivan), is a legendary gunslinger, known for his propensity to critically wound rather than kill. He’s also a fellow who’ll stay out of a fight if it isn’t his. So, when he reluctantly picks up a pistol to avenge his friend and stop the ornery Brock Drummond (John Ericson) from shooting up the town, you know it means something. Not just to him, but also to Drummond’s sister, Jessica (Barbara Stanwyck), the woman in black--or “the high riding woman with a whip,” as the movie’s ballad dubs her. Jessica runs the area with her forty-man army, and with the previous sheriff dead, she sees an opportunity to reinforce her regime by pinning the tin star to Griff’s chest.

Naturally, he isn’t having it, and so begins a sexual-tension standoff that drives the rest of the movie. The chemistry between Griff and Jessica is instant, and born of mutual respect, even if Griff is a bit too straight-arrow to admit it--or to accept his own infamy. Fuller’s script for Forty Guns is full of sharp innuendo, equating guns and power to sex and manhood. It’s not just knowing puns about “cleaning guns” or choosing the right stock, either; in the first showdown between Griff and Brock, there’s a clear visual commentary going on, as Joseph Biroc’s camera cuts between tight shots on Griff’s righteous, determined eyes and Brock’s limp pistol, drooping by his side, never to be fired. One is a man, and the other...well, not so much.

Fuller had something to prove with Forty Guns. He had seen how westerns discounted the female characters, and he wanted to upend that cart and all the horse apples inside of it. It’s important that no one ever questions Jessica’s ability to lead, or even suggests it’s strange that she’s the boss--outside that ballad, which concludes by wondering if there is any man strong enough to get her to come down off that high horse. (Not to be all spoilery, but the nature of that lyric does lead to the Forty Guns’ single bum note.) Jessica’s undoing is because of a man, but it’s a family tie, not a romantic one. Both she and Griff are challenged by their younger brothers. The middle Bonell, Wes (Gene Barry), has been Griff’s second for his entire career, but neither of them want their youngest, Chico (Robert Dix), to follow in their footsteps. In terms of western mythology, Fuller has put Forty Guns at the tail end of the gunslinger life. The situation the Bonells find themselves in is indicative of the changing times, and Fuller structures his script to encompass three generations. There are the aging lawmen, the nearly blind sheriff that Brock guns down (Hank Worden) and the marshall Ned Logan (Dean Jagger) that sees himself as Jessica’s #2, both of whom don’t want to give up the ghost just yet; there are the middle-aged veterans, Wes and Griff, who see an end to their wild adventures as society shifts towards civility; and then there are Brock and Chico, eager to make their marks, blind to the oncoming obsolescence of their would-be profession.

It’s quite a switch-up. In any other western, you’d have the put-upon damsel begging the hero to lay his weapons to rest and give her some notice. In Forty Guns, it’s Logan who confesses that it’s love that motivates him to run off Griff and put things back to the way they were. It’s a scene that, thanks to Jagger’s performance, can be viewed both as sympathetic and pathetic. What are we to make of an old-time frontiersman who pleads, “Jessica, I’m a man. I’ve a man’s feelings. You can’t buy what I feel”? John Wane would never be so vulnerable. #notallcowboys

But Forty Guns is a western where a woman owns everything. And has more of everything. She has more land and hombres in her employ than any would-be rival, and the biggest dinner table around so she can feed them all at the same time. (What a power move, forcing Griff to pass his message across twenty other men just to deliver it to her!) Perhaps her respect for and attraction to Griff comes from the fact that not only does he not need anything from her, he is not intimidated by her strength. In their first real scene together, she lets him drink her whiskey while she susses him out, and it ends with neither having given up any ground.

For two people like Griff and Jessica, however, it will take an act of God for them to give in to their desires, which is exactly what Fuller delivers. In an astounding tornado scene, the pair end up huddling together behind a brick wall, their backs to the wind, hoping the structure won’t fall before the danger passes. Once the wind has blown itself out, so too has their resistance.

There would have been no better choice for this film than Barbara Stanwyck. She had spent her career playing tough women who managed to maintain their femininity in a world that demanded she could not be both. Think of her turn as the con artist in The Lady Eve [review], the sexy femme fatale who still is a woman and able to feel and be. Stanwyck also pulled cowpoke duty for the Criterion Collection once before in Anthony Mann’s The Furies [review]. She has a commanding presence here, presiding over the men folk as she does, often astride that white horse, which the actress rode herself. No stunt doubles. Fuller uses low angles to give Jessica her proper place as commander, the landscape tilting to accommodate her. (Fuller is far less inclined to pay homage to the mountains and prairies than John Ford, probably convinced that man would end up besting Mother Nature in the end.) The result is more regal than sinister. As a villain, Jessica is never truly evil, she only appears to be doing what she thinks she has to do, and her fall comes from a different necessity.

Were we to call anyone a villain, it should be Brock, who could have commandeered a film of his own. He’s a real mean son of a bitch, with nary a glimmer of moral ambiguity. His betrayal of the sister who tried everything she could to help him could be what drives Jessica to the choice she makes at the end, casting her final scene as some kind of plea for relief rather than a surrender. Griff works as a foil for Brock. He is as unyielding, but he sees nuance in the life he’s lived and accepts the consequences. His confidence is earned. To my eye, Fuller isn’t really condemning the macho lifestyle here--that lip-licking, knowing look the gunmaker’s daughter (Eve Brent) gives Wes when he’s getting things done is no different than how Fuller and his camera look at Griff--he understands the need for decisive action. His ideal is more balanced. It allows for Jessica to have equal power, and for the intelligent, peaceful option to be considered first. Hence, when Brock forces Griff’s hand, Griff sees his worst sin as finally losing control. (Again, it takes a tornado....)

If Jessica’s final decision comes a little too quick, we might forgive it, since Forty Guns is a movie where everything happens quickly. At a lean 80 minutes, Samuel Fuller’s edits are as decisive as his characters’ actions or the violence that results from them. You only have the space between the guy reaching for his gun and his firing it to make your move. Besides, since the very last shot is a long one, we don’t really see what happens. For all we know, this could be the western equivalent of the end of The Graduate [review]. Then again, Fuller fans know he’s got a heart as soft as his gumption is tough, so most likely, we’re looking at some kind of happily ever after.