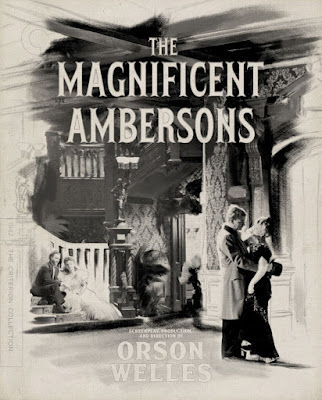 Orson Welles is the true prototype of a Wes Anderson character. A child prodigy, precocious and intelligent, obsessed with magic, a born entertainer, emerging from a semi-privileged background with a blind self-determination that would hinder as much, if not more, than it helped, he could have been Max Fischer or Steve Zissou or, god help him, in terms of his relationship to Hollywood, Eli Cash.

And I think even Wes Anderson would tell you, he wouldn’t have created his real second feature (Bottle Rocket fans, come at me [review]) without Orson Welles’ 1942 second feature, no The Royal Tenenbaums [review] without The Magnificent Ambersons. 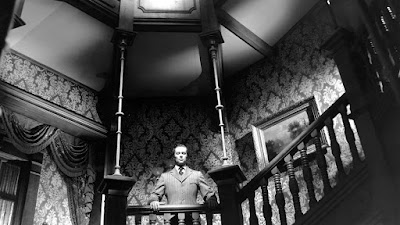 The comparisons are obvious from the jump: the intro for each is a family history played out in a montage using artificially antiquated imagery, explained by a narrator with a soothing voice, somewhat detached, somewhat reverent, but also sardonic and prone to ironic commentary. In the case of The Magnificent Ambersons, it’s Welles himself, his only mask the recording booth, grappling with the stars of his narrative like a proud parent resigned to letting his children make their own mistakes.

Like the Tenenbaums, but with a more pronounced urgency, the Ambersons are a family in decline, even if they can’t see it yet. A family soon to be out of step. As the 19th century nears its close, the Ambersons are top of the heap, but soon they will be as superfluous as the horse-drawn carriage. Indeed, their happiness and prosperity will become inextricably linked to the advancement of the automobile. A onetime suitor of Isabel Amberson (Dolores Costello, Little Lord Fauntleroy), Eugene Morgan (Joseph Cotton, The Third Man [review]) returns to town after years in exile looking to establish his own auto factory, building a model he designed. A widower with a young daughter, Lucy (Anne Baxter, All About Eve), Eugene is everything the most recent two generations of Ambersons are not. Namely, he is self-made and self-sufficient. Essentially, he is the Danny Glover character in The Royal Tenenbaums, an example of frugalness and responsibility--and thus an interloper in a clan resigned to doing things their own way. 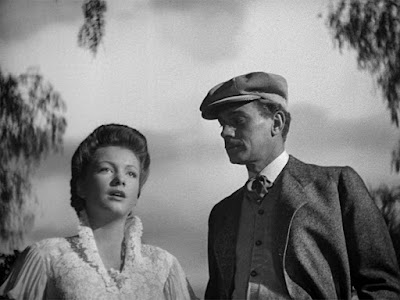 It only takes one brief encounter for it to become apparent that a torch still burns between Eugene and Isabel. And one also quickly ignites between Lucy and Isabel’s bratty son, George (Tim Holt, Stagecoach [review]). They all come together at a glorious party thrown by the Ambersons and beautifully choreographed by Welles. There is dancing at the soirée, but the affair itself is its own dance, a physical exchange set to social rhythms. Welles favors long, complicated shots with the partygoers circling each other, George trying to disengage from the flow and isolate Lucy, but the crowd consistently coming together, dialogue providing the occasional percussive flourish. It’s a smooth and elegant set piece, establishing the full dynamic of The Magnificent Ambersons, assigning each player their part in the ballet. It’s also effortless, the director’s technique becoming invisible since his first feature; where Citizen Kane dazzled with its constant invention, Ambersonssoothes with its easygoing, imperceptible style. 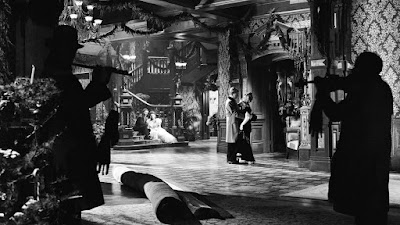 The Magnificent Ambersons is based on a sprawling book by Booth Tarkington (Alice Adams), a family melodrama informed by historical sea changes. Part of adapting the book to film is paring it down to a manageable narrative, with a focus on George as the central figure. There is an irony to George. As the youngest Amberson, he is the most resistant to change, probably because he is the one who has benefited most from his grandfather’s fortune while contributing absolutely nothing to it. George expects everything to be handed to him and expects nothing to disrupt that. So, why adopt a horseless carriage when he is getting on fine with the dependable horse-drawn version? And when his father passes, if he were to let his mother marry Eugene, who knows what that would mean for the family fortune. 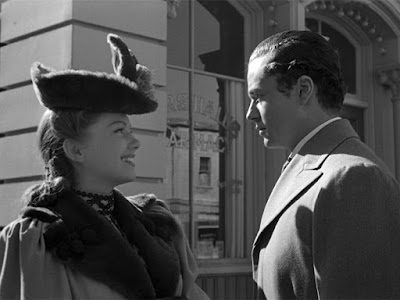 While George succeeds at heading off the romance, the business of making cars is something the remaining Ambersons see as a good investment prospect. Thus George’s two biggest concerns become linked, and if one were to believe in karma, his selfish block against happiness results in professional failure for Eugene and the bankruptcy of the Ambersons. George is a tough part to play. If an actor is too petulant, as was Jonathan Rhys Meyers in the 2002 Alfonso Arau adaptation, the movie becomes unwatchable. No one ends up really liking George, not his family, not even his director, but Tim Holt manages to maintain some glimmer of humanity for the character. There is a sense that his shell could break with the right impact. He can cross over from the side of the family that never worked for anything to the side that pitches in where it counts, leaving his bitter, scornful Aunt Fanny (Agnes Moorehead, Magnificent Obsession [review]) to join the jovial Uncle Jack (Ray Collins, Touch of Evil [review]), as it were. If George has cursed the family, then it will require a sacrifice to undo it. 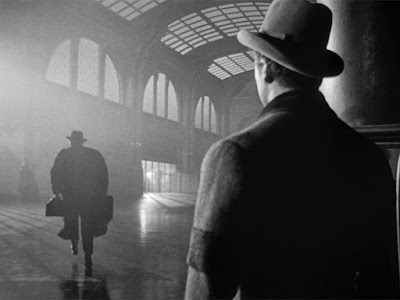 Sadly, even as Welles had pared down the Tarkington novel, the studio would pare down The Magnificent Ambersons in his absence, gutting the plot by nearly an hour to shorten the running time. The full Welles cut of the film is one of the great holy grails of cinema, though one likely to never come to fruition, as there has been no indication that the missing footage exists anywhere, and up until Criterion recently rescued the film, Warner Bros. had treated it like an unwanted stepchild, only ever releasing it on DVD coupled with its more accomplished sibling, Citizen Kane. It’s a testament to Welles’ skill that the movie is still so damn good, but if you are watching it and get a weird feeling that something is missing or has been glossed over, your instinct could very well be correct. The one spot where it’s most obvious is the hurried conclusion, which was shot without the great director. Georgie’s off-screen redemption and rescue feels rushed. You have to wonder what the true character arc here was, what great moments fell to the editor’s scissors, or how it would have left the audience without the tacked-on finish. The final fade out in The Magnificent Ambersons comes without much warning. 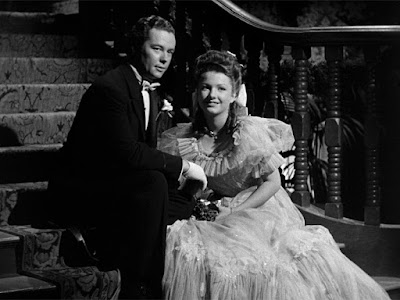 A couple of other quick notes I jotted down on this viewing of The Magnificent Ambersons:

* Joseph Cotton has always had a quiet presence, making him the perfect foil for a blustery actor like Orson Welles, but in movies like Citizen Kane or Hitchcock’s Shadow of a Doubt, he also has an angry edge. Not so here. Eugene Morgan is his most gentle performance, and with his kind eyes and somewhat growly voice, it suits him.

* The audio in The Magnificent Ambersons is particularly impressive. Welles mixes the sound to match the location, with voices echoing and fading out in relation to where the actor is to the central focal point within the cavernous halls of the Ambersons mansion. Likewise, the lighting is designed to be natural, befitting the time period, meaning lots of shadows are cast across the rooms, changing to fit the time of day. In some scenes, the aesthetic becomes almost gothic, befitting the stifled passions and secrets that lay behind each door in the Amberson household. (See also: Hitchcock’s Rebecca [review]; Lang’s The Secret Beyond the Door [review].) 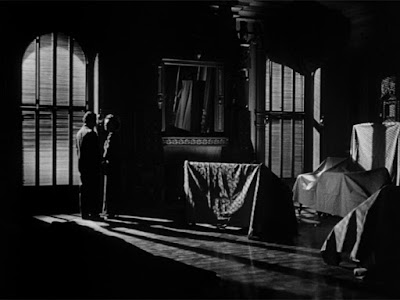 * I watched The Magnificent Ambersons on Christmas Eve, and there is enough wintery melancholy here to qualify it as a Christmas movie, but I’m posting the write-up closer to New Year’s, a more fitting holiday for The Magnificent Ambersons, as it’s all about the passage of time, and the need for growth and change. Shall we start a new tradition? Maybe pair it with Visconti’s The Leopard? 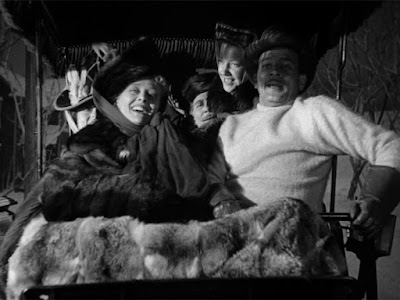