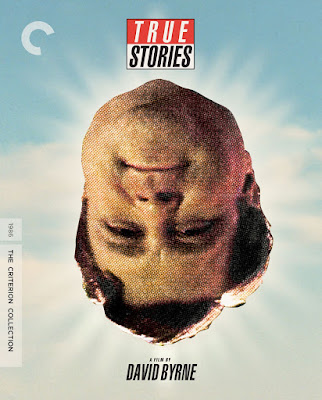 Somewhere on the road between the early ’80s debut of MTV and the post sex, lies, and videotape Sundance revolution of early ’90s cinema, there is a pit stop: David Byrne’s  True Stories. More than just a vehicle for the Talking Heads’ next album--though there are some clips that were repurposed into genuine music videos--but not as fully realized a narrative as other artists’ self-mythologizing star turns (Prince’s Purple Rain or A Hard Day’s Night [review] and Spice World), True Stories is a genuine oddity. All these years later, revived by the Criterion Collection, released to a new audience, it comes off as a curio from another time, strangely innocent and yet indicative of the decade’s sometimes arch and ironic approach to commercial art. 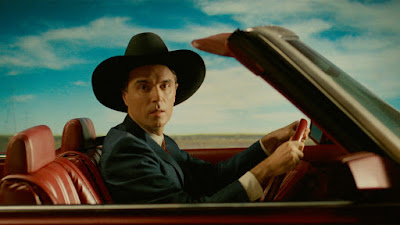 The story goes that David Byrne was inspired by tabloid headlines, and he wanted to both explore the Americana that often fueled these bizarre tales but also celebrate the Americans that devoured them. True Stories is set in the fictional hamlet of Virgil, deep in the heart of Texas, and with Byrne serving as an observant on-camera narrator, the movie tracks the town’s populace over several days leading up to a celebratory parade and talent show. “Altman-esque” could easily be applied to True Stories; with its large criss-crossing cast and focus on at least one character’s attempt to write a song, it could be viewed as a kind of mini Nashville. I’d wager Byrne took more from his buddies Jonathan Demme and Jim Jarmusch, however; True Stories has the same quirkiness the latter would apply to his movies Mystery Train [review] and Coffee & Cigarettes. 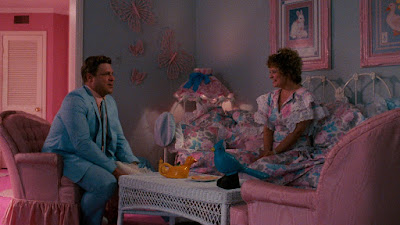 Sadly, I fear I am spending more time talking about what the movie is like because that is really more interesting than what it is. There isn’t a lot to hang your hat on here, even with all the intersecting stories and the collection of wonderful character actors. Spalding Gray shows up as a tech baron who is disconnected from his family and neighbors; Swoosie Kurtz is a rich woman who never leaves her bed; and Jo Harvey Allen (The Homesman) regularly gets some chuckles as the living embodiment of a tabloid, a compulsive liar who connects herself to Elvis Presley, JFK, and just about anything else she can think of. (One of Byrne’s co-writers, Stephen Toblowsky, is also a well-known character actor, having appeared in Spaceballs, Groundhog Day, and countless others.) True Stories checks in on factory workers, bar patrons, and even the children of Virgil, and while one might be worried that an arty New Yorker like Byrne would not be able to resist making fun of Middle America, nothing could be further from the truth. His vision of Texas can certainly be unique to him--the music, the fashion, etc.--but he appears to have genuine affection for the small-town values that keep this community a community. He even dresses in western wear to (awkwardly) fit in. 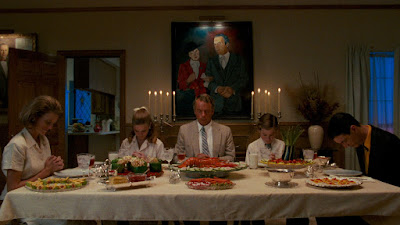 That said, it’s clear that Byrne wants to make fun of something, but the satire is so scattered, it’s hard to tell what that is. Targets include advertising, religion, dating, popular music--all things that didn’t require the Texas setting to get skewered. Or is it that the individual dreams of the Virgil citizenry will carry on despite the invasion of outside ideas? Given that the climactic song is all about how love is more important than material goods or even freedom, such a theory would not be a stretch. It’s even called “People Like Us,” an inclusive statement, and sung in the movie by John Goodman, the saving grace of True Stories. 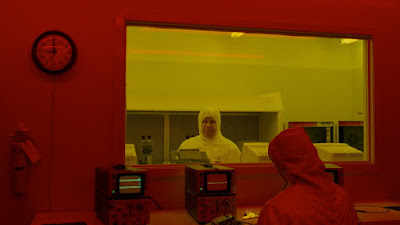 Only a few years into his career at the age of 34, True Stories was a pretty substantial role for Goodman. The Big Easy and Raising Arizona would soon follow, and John Goodman would become the John Goodman we all know and love, but the part of Louis Fyne shows the performer as an almost naïve neophyte. Louis works at the microchip manufacturer just like everyone else, and at night he turns his attention to finding love. Goodman plays him as both self-assured and meek, one trait masking the other, and there is a sweetness to the performance that makes it impossible to not want Louis to find what he’s looking for (or maybe for the actor to appear in a revival of Marty). Though more fresh-faced than he’d even appear in his first collaboration with the Coens, all the classic Goodman traits are there: the smile that is both endearing and tricksterish, the expert comedic timing and physical precision, the natural line delivery. His presence on the screen is so amiable, it imbues the rest of True Stories with a similar likeability, meaning that even if David Byrne’s threads never weave into a single tapestry, it’s hard not to still feel good about having spent your time taking a tour through his made-up utopia of would-be normalcy. 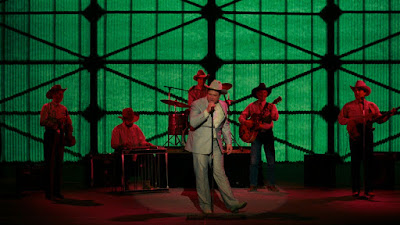