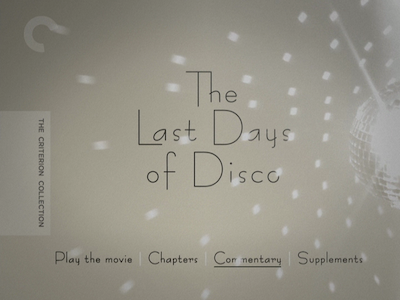 Of all of Whit Stillman’s films, The Last Days of Disco is by far my favorite. It’s the most full realization of his unique vision, and the most watchable on repeat viewings, offering multiple complete story arcs for its ensemble of characters. It was also what, for many years, we thought would be his final film. In a move worthy of Terrence Malick, Stillman would wait 14 years to release his next movie, 2012’s Damsels in Distress [review]. For all we knew, we were never getting him back.

Released in 1998, The Last Days of Disco takes us back to the early 1980s, when disco was enough of a cultural phenomenon to inspire mass hatred across America. (One spliced-in news report of a public burning of disco records is so exaggerated you’d not believe it were it not real.) The screenplay follows a handful of twentysomethings over the better part of a year, as they realize the young professional life they were promised is not exactly as described. They are fresh enough that what university their peers attended still matters, but on the precipice of having enough experience to discover it really doesn’t matter at all. 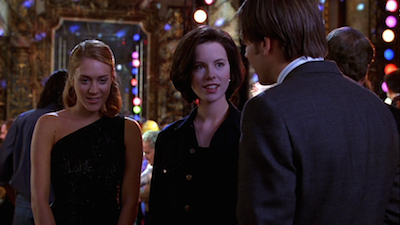 The group that Stillman follows congregates at a Studio 54-esque nightclub, mostly at the behest of Des (Chris Eigeman), one of the club’s managers. If they can’t get in through the front door, he sneaks them in through the back. This doesn’t always earns him points with his bosses. Junior ad man Jimmy (Mackenzie Astin) is persona non grata, but he keeps weaseling his way in, convinced it’s the access that keeps him employed.

More important to the social group are Alice (Chloe Sevigny, Manderlay [review]; Big Love [review]) and Charlotte (Kate Beckinsale, Snow Angels [review]), two assistant editors at a major publishing house who, despite attending the same college, weren’t really friends until now. Mirroring their roles in Stillman’s latest, Love & Friendship, Sevigny’s Alice is more naïve and impressionable, while Beckinsale’s Charlotte spews advice incessantly. Her helpful hints are often born of jealousy and intended to position herself better, whether she realizes it or not. In fact, as Alice’s fortunes rise both in romance and at work, Charlotte pushes to get in ahead of her. She even ends up dating Jimmy not long after Alice has moved on to Tom (Robert Sean Leonard, DeadPoet’s Society). 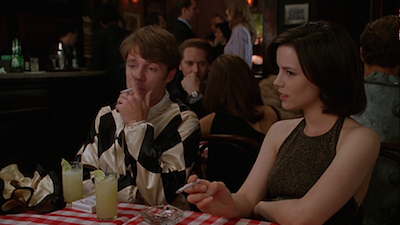 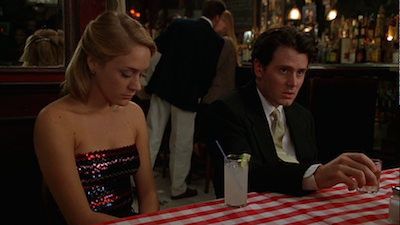 The characters in The Last Days of Disco bear a striking resemblance to those in Metropolitan [review], just a few years further down the line when they are no longer living at home and no longer able to rely on the same level of handouts from their family. All are anxious to make their mark in the world, but at the same time, they find that it’s not as easy as they expect. As Jimmy and Des complain at one point, they keep being branded as “yuppies” despite the fact that neither has a job that feels upwardly mobile or professional, much less lucrative. 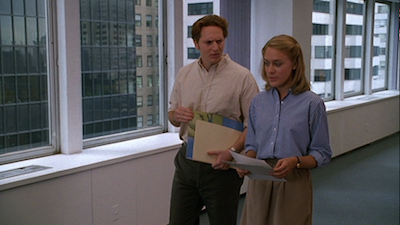 But this is where disco comes in. Stillman has cast he discothèque as a metaphor for cultural change. The dancefloor bouillabaisse mixes all types together, and the scene offers different promises to each. Charlotte sees it as the harbinger of a real sexual revolution where women will have control, whereas Josh (Matt Keeslar), a freshman district attorney, sees it as a great equalizer where anyone can be whomever they want. His interpretation is particularly ironic, since being who they want to be is exactly what these young adults are failing at. 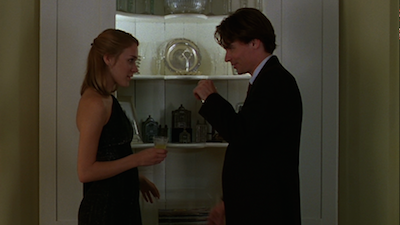 As episodic as Barcelona [review], and yet as socially contained as Metropolitan, The Last Days of Disco provides Stillman with his most pronounced opportunity to place his idealized caricatures within the real world. Released from the manicured confines of their Manhattan apartments or the exile of a foreign land, the ensemble here steps closest to a recognizable world of any of the films. In fact, though released last, it fits the trilogy as a middle piece. A cameo of Audrey and Jack from Metropolitan shows us that there is some hope for these anxious wannabes, while an appearance by Ted from Barcelona (Taylor Nichols pulls double-duty) points a way of escape for the young men. The fact that unlike the other films, however, the characters all find their place by the end, or at least believable direction to the same, gives The Last Days of Disco a greater sense of finish. (We are still completely ignoring that Barcelona epilogue.) 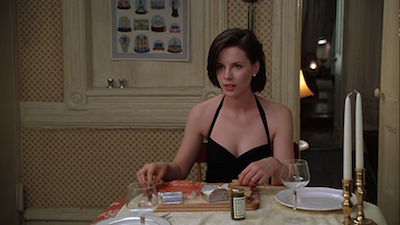 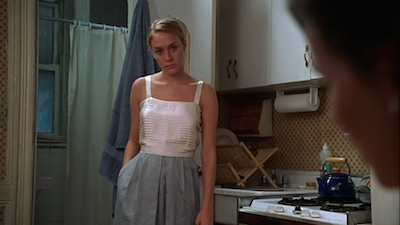 By this go-around, Eigeman had perfected the fast-talking cynicism routine that had serviced him through Stillman’s previous efforts. Des fully embraces his role as a scoundrel, and his well-rehearsed routine of dumping women by telling them he has realized he is gay is tinged with equal parts savvy and machismo. And if we ever doubt Stillman’s sympathy for the cad, there is a Tarantino-worthy debate between Josh and Des over whether The Lady and the Tramp reinforces an unhealthy obsession with the bad boy or shows that a gadabout can really change.

The Last Days of Disco really belongs to Sevigny and Beckinsale, however. Though Alice bristles at being compared to a kindergarten teacher, Sevigny has never been more wholesome or confident, disguising her real charm as plainness. And Beckinsale’s performance is marvelously knowing. She treats Charlotte’s bullshit with the utmost sincerity, so much so that at times you can’t help but nod along and say, “Yeah, but she’s right, you know.” Frankly, by the end, I kind of feel like Charlotte and Des are the ones who’ve really got if figured out. They don’t see the value in conventional delusions. 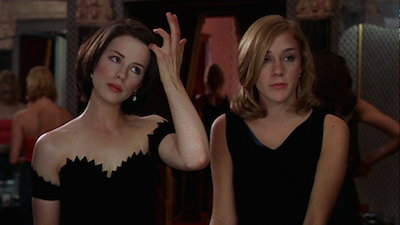 The best part about The Last Days of Disco, though, is that it’s pragmatic without lacking hope. Stillman appears to judge his characters less, and to embrace their foibles without the wry irony of his earlier films. Perhaps it’s his own heartfelt  love of disco, just as he loves all dance crazes, and his full embrace of it that allows him to spread his wings a bit more. Or perhaps it’s just the confidence that comes from having made a few films. Regardless, The Last Days of Disco remains his crowning achievement. Nearly two decades later, it’s fun, and touching, and just plain likable. 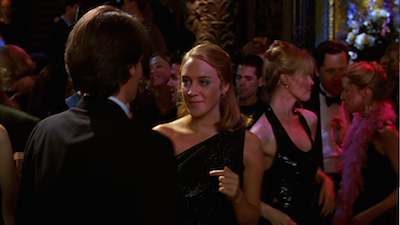 Which makes it all the more ironic that if The Last Days of Disco has one real flaw, it’s that the dance-obsessed Stillman is not very good at directing the dancing itself. The club scenes are stiff and subdued, and never match up to the rhythms of the soundtrack. The discothèque is too brightly lit, removing any mystery or allure; it never feels like the type of place you’d really want to be. That may be the only advantage the “true-to-life” 54 has over its rival. Mark Christopher’s grim mess was released just a few months after Stillman’s triumph, to much more fanfare and failure proportional to the same. It’s coked out and seedy and mired in the 1970s, and Christopher makes Studio 54 look like a real good time, whereas Stillman is stepping forward toward the neon 1980s with little lingering nostalgia, a move that makes all the difference. 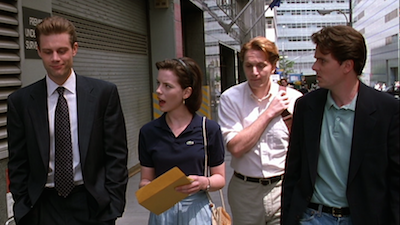