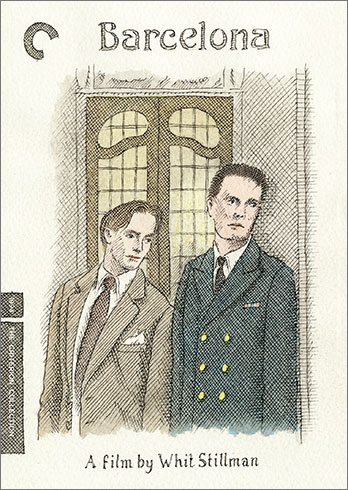 I can’t imagine a more withering critique from a Whit Stillman character than Fred, the caustic American patriot in Stillman’s 1994 film Barcelona, realizing that the Spanish partygoers he’s with won’t dance because they consider it too early in the evening. To combat this ridiculous revelation, Fred puts on a limbo record and sets up a pool cue to serve as the stick everyone is intended to shimmy beneath. To say it doesn’t go down well would be an understatement.

Stillman’s second film in many ways could be seen as a sequel to his first, Metropolitan [review], even though they don’t quite share any of the same characters. The three movies in Criterion’s A Whit Stillman Trilogy are a thematic series, exploring different pockets of life in the 1980s. Barcelona, which is the middle film in terms of release but more likely the third in terms of the narrative timeline, breaks the tradition set by the others by not just taking place in Spain, but the American transplants who are visiting there, Fred (Chris Eigeman) and Ted (Taylor Nichols), are from Chicago rather than New York. Not that it matters in Stillman’s world. Absent of accent or dialect, the cousins are two pieces of the same upper crust that Stillman bakes for all his movies. The movie begins with Navy man Fred arriving at Ted’s Barcelona flat on an advance mission to prepare the way for the arrival of his fleet. Set near the end of the Cold War, the visitors must face political unrest and anti-American sentiment. Ted is a salesman who has been living and working in Barcelona for a few years. He is acclimated to the scene, running in an international circle that mostly deals with foreign business, hanging out with women who present at trade shows (never was quite sure what that meant). Recently heartbroken, Ted is trying to live a religious-fueled life, theorizing that much of the failure of love in Western civilization is down to our obsession with physical beauty.

As a pair, Ted and Fred could easily be Jack and Nick from Metropolitan, with Nichols once again playing the neurotic thinker and Eigeman his sarcastic foil. Fred takes his job seriously, but little else, and quickly skewers his cousin’s philosophy while simultaneously sapping some of the vanilla out of Ted’s game by telling the ladies Ted is an S&M daddy with a leather fetish. Ted’s own commitment to his beliefs is ruined shortly thereafter, when the so-called homely girl stands him up and sends her pretty friend Montserrat (Tuska Bergen) in her stead. Ted falls for her, and gets serious fast--though their dating is complicated by the fact that Montserrat is in an open relationship with a reporter (Pep Munné) who not only is obsessed with beauty, but also American vulgarity and conspiracy theories. He believes Fred is a C.I.A. agent. 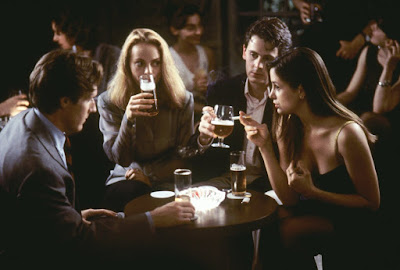 Barcelona is light on plot, but as you can tell, heavy on story. The episodic script follows the cousins over a month or so, focusing on their social life and their mishaps as strangers in a strange land. Unlike Metropolitan, which tracks one outsider infiltrating a small group, the leads here are outsiders in a much larger venue, with no real potential to fully assimilate. Amusingly, Stillman juxtaposes Fred’s boorish behavior with the bruised sensitivity of proud Americans who just can’t understand why everyone doesn’t think their cool. The way the two men get along with their Spanish lovers and their friends is the source of Barcelona’s humor and drama in equal measure. The separation is even evident in acting styles. The American’s are far more caricatured, the Spaniards more natural. (Including a pre-Mighty Aphrodite Mira Sorvino, wholly immersed in her role as a Barcelona girl who strikes Fred’s fancy.) 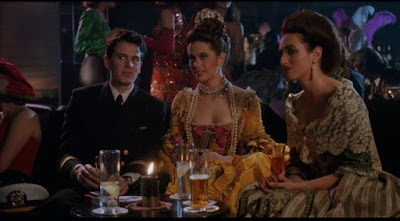 More important that the cultural divide, though, is the relationship between the cousins, which has vacillated between love and hate since they were kids. Ted can’t handle Fred’s humor, and believes him to take advantage, regularly borrowing without asking permission or returning what he took. Yet, they are also the only family they have and will stick with each other when it counts. Their realization of this--and where the two boys playing around overseas have to finally try to be adults--comes after a few misconceptions about Fred’s real identity leads to him being shot. Honestly, Barcelona suffers after this story turn and never really finds its balance. While the first 2/3 of the movie is fairly footloose and fancy free, the final third tries for a gravitas it never quite lands, complete with a pat coda that comes off as wholly unnecessary. Like the indie director was trying to placate his new corporate bosses.

Still, that first hour or so is what will draw you back to repeat viewings. In my write-up of Metropolitan, I compared Stillman’s creation of a self-contained world to that of Woody Allen’s, but I think with Barcelona there are more comparisons to be made between the two auteurs. Beginning with the simple credits (lettering on a black field, traditional music) and carrying through the light filmmaking approach--there are no zooms, and only the subtlest of camera movement--one can’t help but think of some of Allen’s more recent European-set movies, including Vicky Cristina Barcelona [review]. Ted and Fred could be the usual Allen stand-in cleaved in two--though, one would never mistake the writing for Woody. Stillman’s comic tone is far more droll. 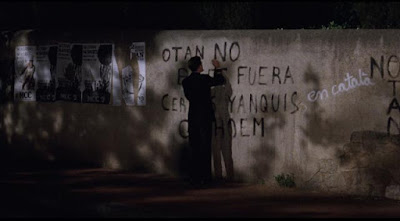 Also like those recent Allen films, Barcelona seems more like a lark rather than one of Stillman’s more considered efforts. Which isn’t to suggest he didn’t take it seriously, but more that he maybe let the process take him where it would rather than bearing down on a greater meaning or story. It’s a carefree vacation abroad, with the extraneous philosophizing being merely a pretense. That stuff is the jazz that Fred so abhors, and we’re all really here to limbo. 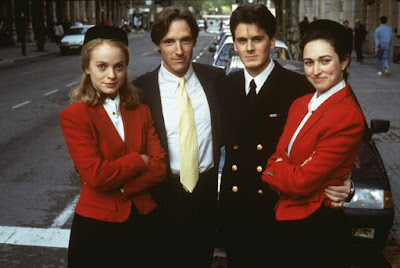 Thanks for the blog loaded with so many information. Stopping by your blog helped me to get what I was looking for.nightclub Barcelona