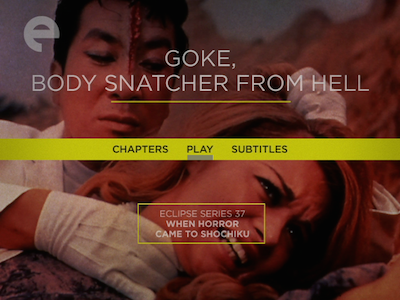 Well, if there was any prevailing motto for the horror movies being made at the Japanese studio Shochiku in the 1960s, it was “anything goes.” Their films were defiant of genre, narrative structure, logic, and yet embracing of imagination, ambition, and the glee that comes with throwing caution to the wind.

Two from 1968 nestled in the middle of the WhenHorror Came to Shochiku boxed set, Goke, Body Snatcher from Hell and The Living Skeleton couldn’t be more different. One is a color sci-fi mash-up that sits right alongside any flying saucer schlock to be found in an American drive-in; another is a black-and-white ghost story more in the tradition of Val Lewton. Both narratives stem from a horrible accident on a travel vessel--a crashing airplane, a massacre on a boat--but there the similarities end. 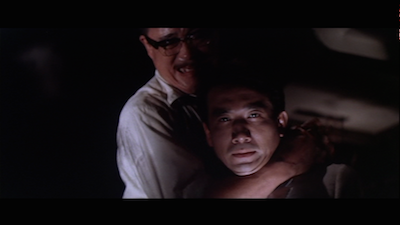 Goke, Body Snatcher from Hell was directed by Hajime Sato. It has many of the hallmarks of a smart B-movie production in that it makes do with a limited budget by isolating the events. In this case, a commercial airplane is stranded in the middle of nowhere after being knocked from the storm-torn sky of an alien invasion. Once the craft is on the ground, surviving crew and passengers must wait out the storm and each other’s dwindling patience. Things were tense even before the crash. An anonymous tip told the crew there was a terrorist bomber on board, and while the hunt for him didn’t uncover any explosives, it did expose a hijacker (Hideo Ko) who had smuggled a gun in his luggage. Rather than be detained after the accident, the bad guy takes the stewardess (Tomomi Sato) hostage. His flight from justice only leads him to the alien craft, however, and the gelatinous ooze that has come to Earth looking for a host. 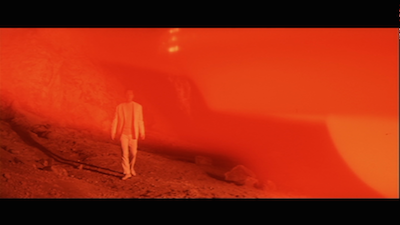 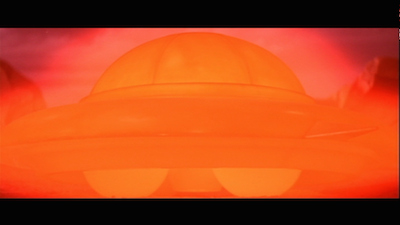 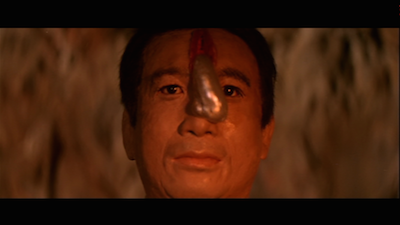 The image would not be out of place in a horror manga. The hijacker’s face splits open and the alien goo crawls inside. Once possessed, the hijacker starts hunting down the other passengers, sucking out their life force like a vampire. One by one, the crew falls, but not before their class positions and particular sins are exposed. It’s like Kurosawa’s TheLower Depths crossed with Hitchcock’s Lifeboat [review]. Amongst the passengers are a corrupt politician (Eizo Kitamura), a feckless arms dealer (Nobuo Kaneko, The Human Condition [review]), and an American widow (Kathy Horan) grieving for the husband she lost in the Vietnam War. The original bomber, as it turns out, was only faking, looking to have some kicks in a world he finds boring, using violence as his own private stimulus.

There is a fairly clear anti-war message here. The aliens, it is theorized, have managed to infiltrate humanity because everyone is so busy fighting each other, they can’t see the threat from beyond the stars. Thus, the bickering fliers are a microcosm of the macro problem. They can’t agree on anything, so they all die. Goke seems sadly prescient. Many of its horrors are relevant to today. Terrorism, privacy, disagreements about science, birds mysteriously falling from the sky--or, committing suicide, as it were. It could just as well be our own timeline the plane is hurtling threw. Albeit, minus the aliens, plastic special effects, and silly plot machinations. Hopefully our world will be absent the bleak ending, as well. 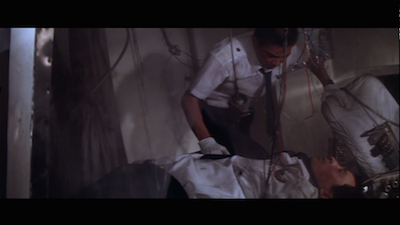 There is some influence of the French New Wave evident in how the scenes of war are cut into the sci-fi monster narrative: random flashes of overexposed violence doused in red flash across the screen at the mere mention of Vietnam. Actually, that’s another element Goke has in common with The Living Skeleton. Sketchy memories of the inciting massacre reappear throughout, just quick splices to remind us of the bloody horror that set all the later spookiness in motion.
Directed by Hiroshi Matsuno, The Living Skelton seems more serious minded than the Shochiku films viewed previously, though with no bigger budget and no better special effects. Hell, there isn’t really a living skeleton, just a lot of fake skeletons anchored to the bottom of the ocean. And they look no more real than the bats that serve as bad omens for the evil men whose greed kicked everything off. 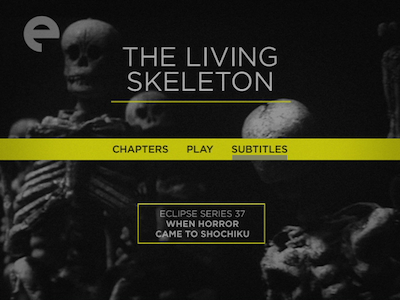 In the opening scenes, a gang of opportunistic pirates attack a sailing vessel and kill everyone on board. Jump ahead three years later, and Saeko (Kikko Matsuoka), the twin sister of one of the murdered, accidentally stumbles on the ship’s ghostly wreckage while scuba diving. She communicates with her lost twin through whatever dimension separates the living from the dead and learns all about the crime. Now having seen the faces of the men responsible, the surviving girl starts posing as the ghost of her sibling, scaring the crooks into their own untimely deaths.

Though essentially a ghost story, its criminal underworld setting adds a touch of noir to The Living Skeleton before eventually careening off into mad scientist territory and even a little tragedy. There are also Christian overtones throughout. The living twin spends much of her time at church commiserating with the priest (Masumi Okada, Crazed Fruit). And, of course, the chaste Saeko only finds the underwater skeletons after having sex with her boyfriend (Yasunori Irikawa, Samurai Spy). Some tropes don’t just transcend genre, but international borders. 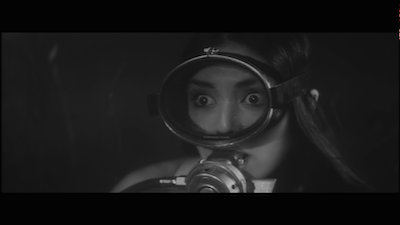 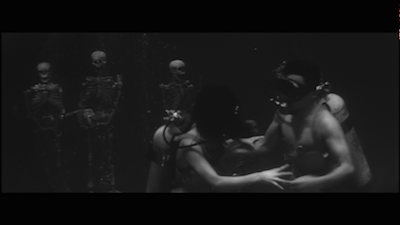 The Living Skeleton doesn’t ever really get scary, though credit to cinematographer Masayuki Kato for getting the look just right. The moody photography creates an otherworldly atmosphere. Like the rocky terrain of Goke, Body Snatcher from Hell), the foggy seaside of The Living Skeleton could be everywhere and nowhere. It is of no real origin, of no real time. Kato and Matsuno get inventive with some of the underwater shots, placing the characters in a kind of netherworld. It could be under the ocean, or it could be outer space, or perhaps this is just where we go when we die. 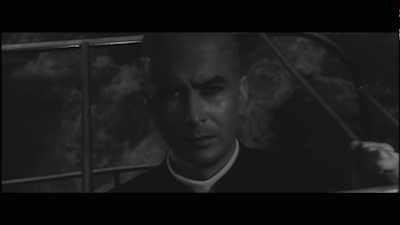 Which, again, sort of encapsulates what is going on in the When Horror Came to Shochiku set. Whether from above or below, from within or without, the threats are indescribable, boundless, and ultimately deadly. Yet, even with the body count, they’re also grand fun. 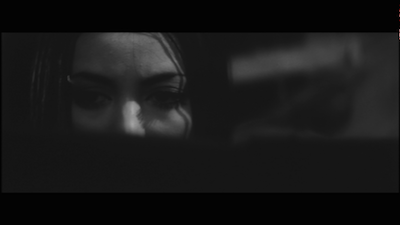 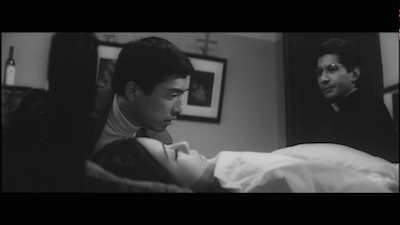