NOTE: A version of this review originally appeared in 2007 when Docurama released their boxed set; the screengrabs also reflect that standard-definition DVD release. 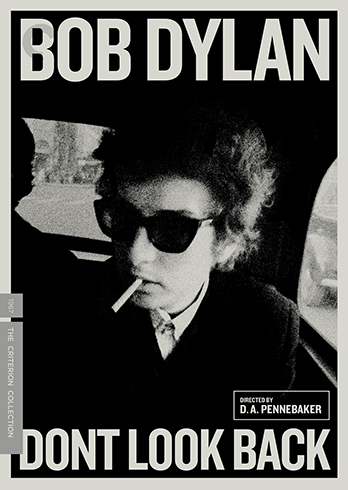 D.A. Pennebaker's Don't Look Back, a profile of Bob Dylan on his 1965 British tour, is arguably the most influential rock 'n' roll documentary of all time, predating even the Maysles' Gimme Shelter and Michael Wadleigh's Woodstock. Thirty years later, Grant Gee pretty much orchestrated his Radiohead feature, Meeting People is Easy, note for note from Pennebaker. Ironically, given the movie's title, Don't Look Back is a film that deserves to be revisited every couple of years. My first viewing was part of a theatrical revival in the mid-1990s, before I was even a Dylan fan (the movie kind of made me one). And while the doc has been on DVD since 1999, and got an overhaul and expansion with 2007's 65 Tour Deluxe Edition, this high-definition upgrade brings Don't Look Back further into the modern age. Make no mistake, Bob Dylan in 1965 was one cool cat. The smartest thing Pennebaker did was to stay out of Bob's business and just hang around. The performer allowed Pennebaker's camera unbelievable access. The cramped shots taken from within the entourage, tracking Dylan from press conferences to backstage waiting rooms and through taxi rides up to the hotel, bring the viewer incredibly close to the subject. Pennebaker isn't just a fly on the wall, he's landed in the ointment, and he captures the bare reality of touring life. There is the whirlwind of fan activity, the backroom negotiations, and more glad-handing than any one person should be expected to take. Hence, the onset of ennui that compels Dylan to go into some mesmerizing tirades, tearing into and tearing down journalists who he sees as beneath him. His behavior is arrogant and mean, but yet you can't blame him and you even sort of like him for it.

Other great moments come when participants have let their guard down, such as Joan Baez ribbing Bob by gently parodying his lyrics or when Pennebaker captures the expression of hurt on Alan Price's face when he tries to tell everyone it's no big deal that he was jettisoned from the Animals. Then, of course, there is the running Donovan joke, giving Pennebaker an unexpected throughline. 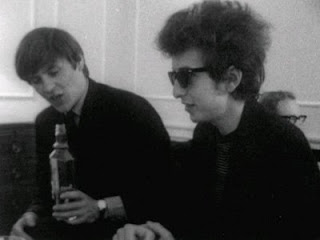 And there is also the music. We don't get a lot of complete performances in Don't Look Back, usually just snippets, often of the same song, underlining the tedium of the endless string of performances. Yet, Pennebaker is smart, and he knows that when it's all said and done, it's the music that counts, and no portrait of the singer would be complete without it. So, he lets the movie climax with the last big night, before delivering a coda that is so perfect, you can't believe he doesn't drop the camera then and there and kiss Dylan and manager Albert Grossman for delivering it to him. It lets all the air out of the rest of the movie, reminding us that most of what has happened is just palaver, and that Dylan's insistence that he is just a guy like anyone else is more true than the preceding ninety minutes suggested.

2007's companion film, Bob Dylan 65 Revisited is an unsurprising byproduct of the DVD era, a service to the hunger for newer better more extras. Pennebaker went back into his archives and put together a new compilation of footage that lasts a little over an hour. Revisited is pretty much more of the same, but without the rancor. The emphasis is on performances, as there are quite a few included, and Dylan's interactions with his fans. This collection of outtakes shows him as far more generous with his audience than one might have gathered from Don't Look Back. There is also a brief appearance by Nico, whose luminous presence even calms the notoriously grouchy Grossman. 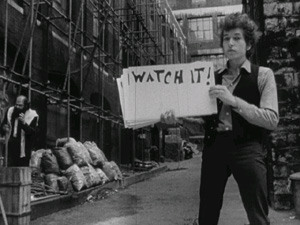 As a bookend, Pennebaker includes another take of the film's iconic opening: Dylan running through a set of cue cards with pieces of the lyrics from his song "Subterranean Homesick Blues." The well-known version has Bob in an industrial area with Allen Ginsberg hanging around in the background; this second version has him on a rooftop with tour manager Bob Neuwirth and another record producer Tom Wilson. The wind is blowing, and it looks cold, and it has a certain metaphorical resonance as a capper to Don't Look Back and all of its trappings. Returning to such a popular and significant film could have been a dangerous prospect, looking either like a cursory cash-in or shrinking from the glare of its more famous precursor. Pennebaker beats the odds with Bob Dylan 65 Revisited, employing a slightly different strategy and letting the footage stand on its own. It's a welcome exercise in nostalgia. 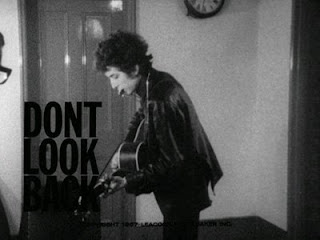