MASAKI KOBAYASHI AGAINST THE SYSTEM: THE THICK-WALLED ROOM - ECLIPSE SERIES #38 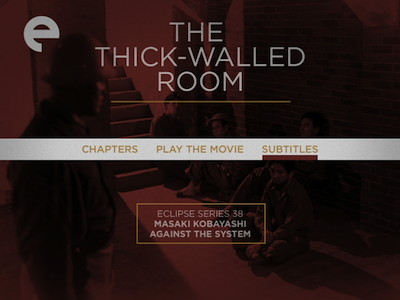 Japanese movies made after World War II that deal directly with the post-War conditions following the country's defeat and grappling with the U.S. occupation offer a unique glimpse into a particular time and place that you can't really find anywhere else. I'd suggest the closest equivalent is American-made movies about Vietnam and the climate of unrest that existed as a result of that conflict. Perhaps if movies had been around after the U.S. Civil War, a Southern cinema might have emerged that would have been akin to what Masaki Kobayashi, Seijun Suzuki, and others created in the 1950s and 1960s. They engaged their nation's shame and struggles honestly, rather than the self-mythologizing that we see in American westerns that feature former Confederate soldiers as protagonists. 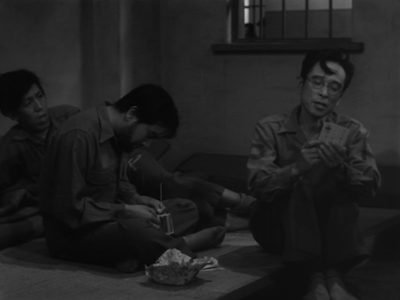 The Eclipse boxed set Masaki Kobayashi Against the System, as its name suggests, is meant to collect early Kobayashi films that wrestled with difficult and sometimes controversial subjects. The set leads with his third film, the 1956 drama The Thick-Walled Room, a prison story written by acclaimed novelist Kobo Abe (The Face of Another). In particular, The Thick-Walled Room casts its eye on men who have been tried as war criminals and sentenced to an indefinite stay in Sugamo Prison. A handful of them share a bare cell, the thick-walled room of the title, under guard of the American soldiers who run the place. They dream of their eventual release, and a righting of the wrong that was done to them. 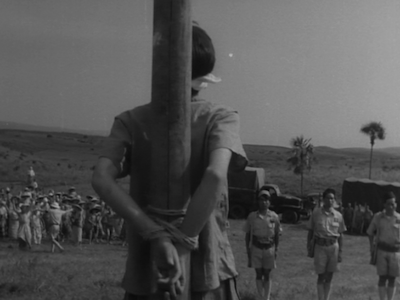 Kobayashi and Abe tell their stories through a narrative that alternates between the day-to-day of prison life and flashbacks. As we get to know the characters in the present, we also see their past. Most importantly, we are shown the so-called crimes that got them incarcerated. The bitter sting of their predicament is that, for the most part, these are soldiers who were pushed into heinous acts by bullying officers. The higher-ranking men got away scot-free, leaving their subordinates holding the bag. The resultant anger that this naturally causes is stoked further as a peace treaty with the U.S. granting Japan further independence uses these poor souls as sacrificial pawns. They will stay in jail and do a nation's penance. (The Thick-Walled Room did penance, as well: though made in 1952, it wouldn't see the light of day until 1956 out of fear it would offend the lingering Americans.) 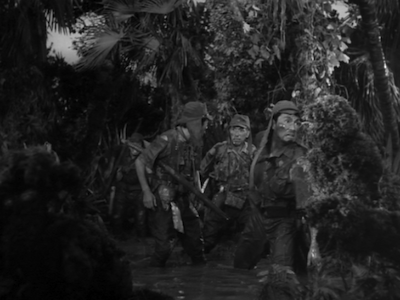 As with any such ensemble drama, The Thick-Walled Room presents a diverse cast of personalities. Kimura (Tsutomu Shimonoto) is a poet, while Nishimura is a smartass. There aren't just Japanese men in Sugamo: Kyo is a Korean soldier who was in the wrong place at the wrong time. Others shun him for being a Communist, particularly as the news of the conflict between North and South Korea filters into to the prison, but as The Thick-Walled Room progresses, others subtly shift toward Kyo's position. Ultimately, the prisoners form their own union, and began to organize to lobby for their release. 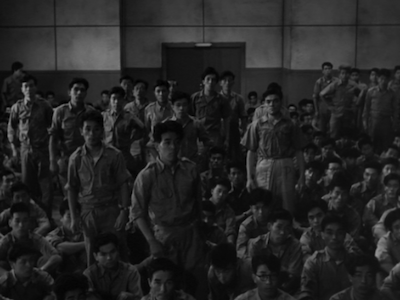 The two main stars of The Thick-Walled Room are Yamashita (Torahiko Hamada) and Yokota (Ko Mishima). Both are sensitive men who still have family waiting for them in the outside world. Both are haunted by the brutality they were forced to inflict on the enemy. Yokota is a romantic who dreams of a girl he hopes to reconnect with when he's free. Little does he know that Yoshiko (Keiko Kishi, The Makioka Sisters [review]) is now a prostitute. In the flashbacks, we see that she is fascinated by American servicemen, and while Kobayashi doesn't address the plight of women in post-War Japan as directly as Seijun Suzuki does in movies like Gate of Flesh, there is some understated commentary here. If a country can be judged by how it takes care of its women and children, Japan is failing. Just beyond Sugamo's fence, women sell themselves and little kids hustle to shine the boots of their occupiers. 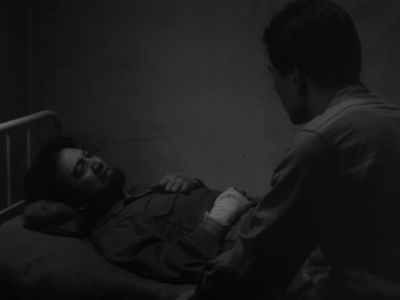 Yokota serves as a sort of social conscience for the film. He is literally a translator, being the one who speaks English, but symbolically this carries over to his being the character who theorizes about prison life and whose ideology evolves. He is the one who explains the experience to his comrades and, by extension, the audience. "Everybody's turning to dust little by little," he tells his brother. He sees the men who are locked up as growing more desperate, doing things they should otherwise be ashamed of to survive and inventing justifications to assuage their guilt. In the case of one of his roommates, Kawanishi (Kinzo Shin, Youth of the Beast), the shame is too much. In The Thick-Walled Room's most visually memorable sequence, Kawanishi is left alone with his hallucinations. Holes are punched through the walls, like shotgun blasts coming from outside, and through each opening, the man sees his sins and the judgment of his fellow citizens. It's like he's under siege from his own memories. Suicide is a looming presence, and more than one man tries it as a means of escape. 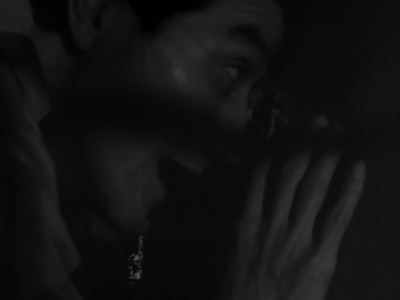 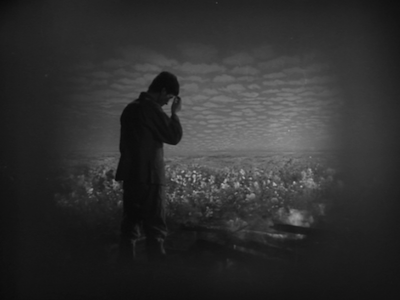 Yamashita has the most direct example of injustice. His superior not only bullied him into murdering an innocent man, but he then testified against him in court. Interestingly, the crime the Americans treat as the most severe is his allegedly having stolen food. Yamashita is to be punished for stealing a loaf of bread, not unlike Jean Valjean in Les miserables [review]. There is a poetic connection between Yamashita and Yokota in that the American that Yokota was forced to beat was also being punished for stealing food to survive. The two men deal with things differently, however: Yokota is given to external expression, while Yamashita internalizes. It's somewhat ironic, then, that The Thick-Walled Room's major climax is Yamashita getting to confront his persecutor directly. The incident brings some closure, and his brief taste of freedom brings the man some peace, but at the same time, it provides no real answers.

It's a bittersweet conclusion. Yamashita returns to his cell ready to embrace his new family. The men who share his fate have made their own community, one that will provide them succor as they forge ahead while also reinforcing the sad truth that they are exiles in their own country. 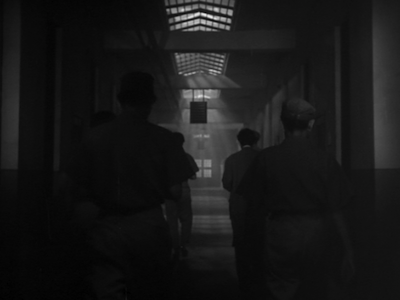