MASAKI KOBAYASHI AGAINST THE SYSTEM: I WILL BUY YOU - ECLIPSE SERIES #38 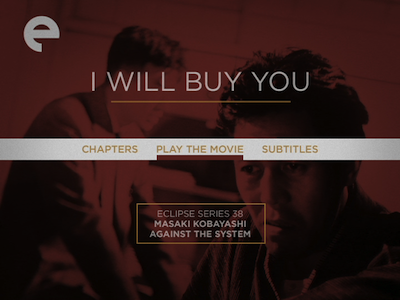 Released the same year The Thick-Walled Room [review] finally got out of limbo, Masaki Kobayashi's I Will Buy You is more conventional in its drama, and though it has some commentary layered into its tale of greed and loyalty, the target is more specific. (To be fair, he made a handful of “safe” melodramas before working his way back to more meaningful territory.)

I Will Buy You is, for all intents and purposes, a baseball picture. But not one that spends much time on the field. In fact, we only see a couple of swings of the bat during it's near two-hour running time. Rather, I Will Buy You is more like an early prototype for Moneyball [review]: it's about the men who control the purse strings and make the teams. It’s capitalism as sport, with the players being substituted for the bat and ball. 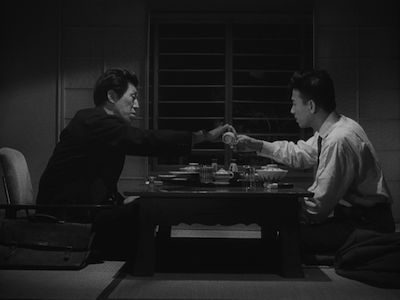 The script follows Daisuke Kishimoto (Keiji Sada, also in Kobayashi’s masterwork, The Human Condition [review]), a talent scout for the Toyo Flowers, a franchise in a small slump as their new, untested manager whips the squad into shape. Baseball is a ruthless business, and Kishimoto has to be practical in his decision-making. In the film's opening scenes, he is on his way to sign a pitcher who lives in the sticks, only to discover the boy has lost a finger working in a factory and turn away without seeing him.

Kishimoto next turns his sights on Goro Kurita (Minoru Ooki), a college player with a power hit. The entirety of the Japanese league has zeroed in on the boy, so Kishimoto is going to have to be clever. For the time being, Kurita has a gatekeeper, Ippei Kyuki (Yunosuke Ito, Sanjuro [review]), his private coach for many years. On first meeting, Kyuki presents himself as a moral personage, concerned more for the boy's future than for his own personal gain. Initial impressions change, however--the longer Kishimoto courts Kyuki, the more flexible he finds the man. Baseball, it would seem, is not Kyuki's only game. Ignoring his penchant for gambling, he is most up-front about being in the import business, bringing fruit and other products from China. The rumors that he spied for China during the war may be born of jealousy, or they may be indicative of a truth where Kyuki really is a "leech" using Kurita for his own gain. It doesn't help that the married father's mistress (Mitsuko Mito, There Was a Father [review]) is the sister of his prized pupil's girlfriend. In all of I Will Buy You, Fueko (Keiko Kishi, returning from The Thick-Walled Room) is the only one who we trust, and so her claims that Kyuki is faking his life-threatening gallstone affliction gives both us and Kishimoto pause. It's a bold statement from the lone figure who appears to be unimpeachably moral. 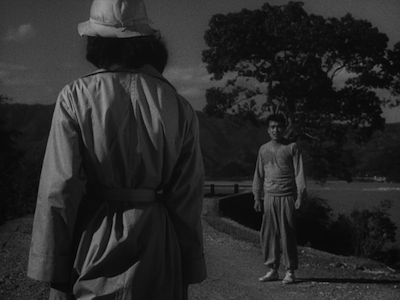 Except, then again, maybe not. By the end on I Will Buy You, it's hard to tell who exactly we are supposed to believe. Even Kishimoto, who is the one who is going to be learning his lesson over the course of this thing, and who also gets to share his true thoughts via voiceover, is still a little hard to fully trust. The entirety of I Will Buy You's story is basically an up-down, push-pull ethical fakeout. We know the talent scouts are lying, but can we believe the coach? What about the girlfriend? Or the baseball player's working class family? Only Goro Kurita escapes our suspicious gaze. Surely the cornfed boy is just a pawn! (I don't know any Japanese equivalent of "cornfed" that doesn't sound racist. Sorry.) 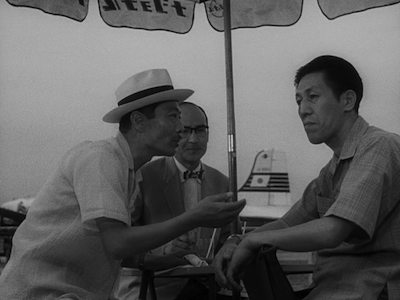 Hopefully I didn't make all that sound irresistible, because it's actually kind of dull. There is a good drama here. Both Sada and Ito are very good, and they feed each other well. If the coach is a con man, he never tips his hand, and with the scout so effectively communicating the ethical conflict, we know whose shoes we're supposed to try to walk in. The problem is, there is not enough variance in the story, nor enough legitimate tension beyond wondering who Kurita will sign with, to justify the extended running time. There is an excess of low-decibel villains, and a real deficit of heroes.

What impresses beyond the strong acting, however, is Kobayashi's increased confidence behind the camera. The director stages the mundane events with a journeyman's hand. The framing in the scene where Kurita finally reveals his decision is particularly impressive. Five characters in three different fields of vision all act and react without the technique overshadowing the content. 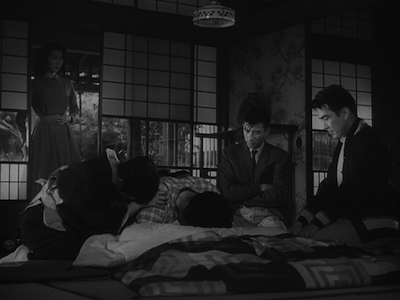 Then again, maybe more hot-dogging from the director, or even the writer, might have helped. To mention Moneyball again (which I Will Buy You definitely resembles way more than, say, Pride of the Yankees [review] or Bull Durham

), both Aaron Sorkin and Bennett Miller saw that they needed to kick the execution up a couple of notches above the subject. They found the energy in the dry landscape of business athletics that Kobayashi never takes off the bench. 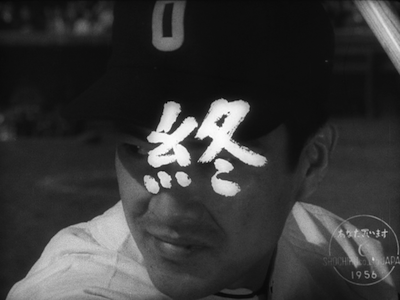