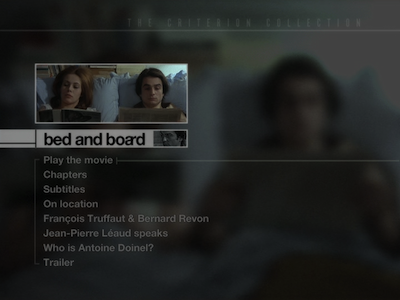 It's in the third Antoine Doinel film, 1970's Bed and Board, that Francois Truffaut's series of films becomes a series proper. Now there is a set style and tone, the happenings vacillating between romantic drama and whimsical comedy, the loose narrative only reflecting traditional plot structure in an overarching sense. In relating the life of Antoine Doinel, small moments are equal to the big changes any individual encounters in his or her worldly progress.

Since Stolen Kisses [review], Antoine (Jean-Pierre Léaud) and his girlfriend Christine (Claude Jade) have gotten married. They live in an apartment in an active building full of colorful characters--the opera singer and his Italian wife, the shut-in, the alleged strangler. There is a bar in the bottom story, and Antoine works in the courtyard, dying flowers for the shop around the corner. While he changes white carnations to red, Christine gives violin lessons upstairs. They are happy, existing is easy to do. 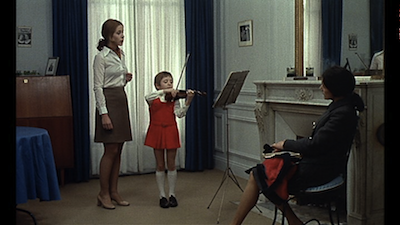 Truffaut and co-writers Bernard Rivon and Claude de Givray could have easily built Bed and Board into a multi-level comedy based out of this one building. The initial banter between the residents is light and airy, and the personalities are distinct enough to make each person interesting unto his or herself. As the movie progresses, however, these folks turn out to be merely colorful window dressing, the kind of distractions that provide a backdrop for newlywed life, but that soon get supplanted by more serious concerns. Growing up is about letting go of the frivolity and embracing serious responsibility. 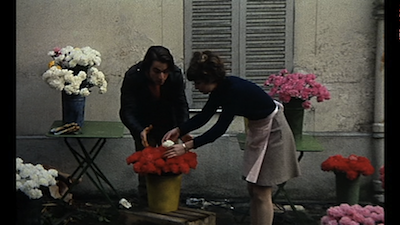 In this case, when Antoine's ambition exceeds the limits of the flower stand, he gets a new job working for an American company specializing in hydraulics. His duty is to run the remote control boats that demonstrate the product. (I initially thought the scene of him at the miniature harbor looked like something out of the modern home demonstration in Jacques Tati's Mon Oncle; amusingly, a Tati lookalike shows up mid-movie for an all-too-brief Monsieur Hulot-esque cameo.) Not long after, Christine gets pregnant, and nine months later, the couple has a son. It's around this time that Antoine also takes a mistress, a Japanese woman he meets at work. Kyoto (Mademoiselle Hiroko) represents the new and the different, the kind of romantic adventure that Antoine would have pursued as a kid. When he is caught by Christine, his defense is that Kyoko is not another woman, she is “another world.” Indeed, the portrayal of this woman is rather shallow, she is like a cartoon of what Westerners imagined Japanese women to be. It's a surprisingly faulty facet of Bed and Board. Ironically, Truffaut appears as naïve about Kyoko's culture as his hero, and it bites both of them on the ass. 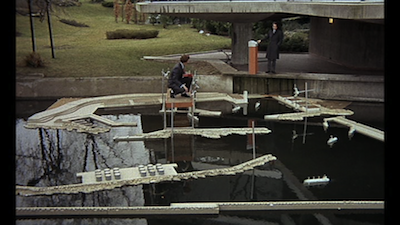 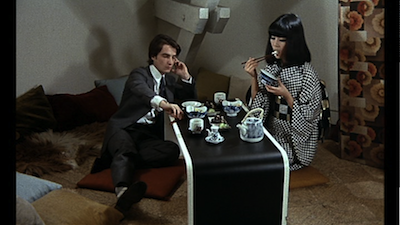 There is a randomness to Bed and Board that makes it come off as a less serious effort than its predecessors. The Doinel movies seem to be growing increasingly fanciful, almost as if Truffaut was taking on Jean-Luc Godard's penchant for jokey digressions right at the time his former colleague was abandoning “non-serious” cinema. How else does one explain the appearance by Hulot, or the animated flowers that spit out Kyoko's written messages when they bloom? Or Christine's geisha outfit? There's even a little self-reflexive humor. The faux strangler (Claude Véga) turns out to be a comedian, and the whole building sees him on TV doing an impression of Delphine Seyrig, quoting not just Last Year at Marienbad [review], but much to Antoine's horror, the bedroom talk from Stolen Kisses. Previous indiscretions are coming home to roost. 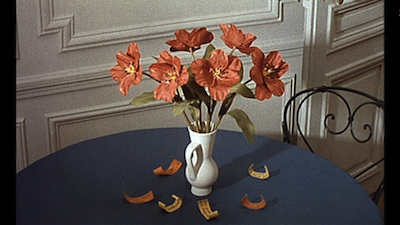 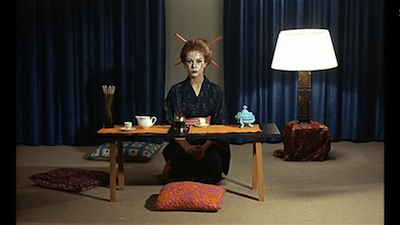 It's hard to say what someone just happening on Bed and Board randomly would make of it. While The 400 Blows [review] and Stolen Kisses can stand on their own independently of the other Doinel films, Bed and Board is nowhere near existing in a vacuum. There is an assumption that you know who Antoine is, and though Truffaut could have easily made a stand-alone film that relates the newly married experience in much the same way Stolen Kisses conveyed the travails of dating and early adulthood, he does less to establish Antoine and Christine as characters separate from what came before. This is a chapter for the initiated only, and is without a doubt lesser for it.

Nevertheless, the film's greatest success really is in how it portrays the ups and downs of being newlyweds. Antoine's growing pains are easy to identify with, though his screw-ups are all the more frustrating for seeing how loving he and Christine are, and how happy they are together, prior to having their son. It's not that Antoine is losing anything, it's just that he's having a hard time letting go, of shutting himself off to past freedoms in order to embrace all that lays before him. 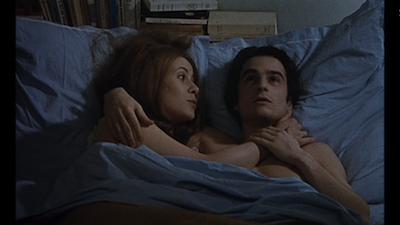 Taking that into consideration, the way Truffaut straddles the fence between the serious relationship drama and the more reckless comedy makes more sense. Bed and Board represents the same transition. It's as if the whole series is maturing before our eyes, and the material is just getting real as we come to our conclusion. (Fittingly, Kyoko  is also finally getting real, or at least getting the last word, expressing a farewell sentiment that isn't an Asian cliché.) Thus, the absence of plot makes room for a true character arc, as Antoine Doinel stops acting like an irresponsible college kid and starts to be a man.

Though, with one more movie to go, it remains to be seen if he can actually hold it together. 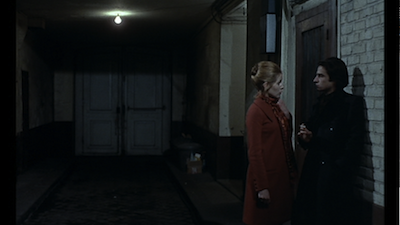