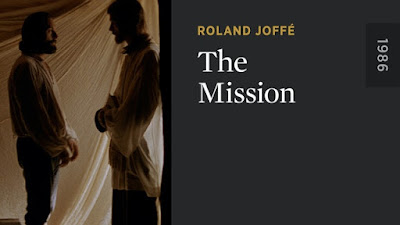 Roland Joffé's 1986 drama The Mission is a lush, if maybe slightly undercooked, historical epic about faith, exploitation, and redemption. It stars Jeremy Irons as Father Gabriel, a Jesuit monk who has traveled to the jungles of South America to build a church in a remote outpost. His assignment is up in the hills, above a massive waterfall that the previous missionary was dumped over. He was murdered and set adrift, lashed to a rudimentary cross, a sign of how much the Guarani tribe that lives there initially wanted to be converted to Christianity.
The Mission is set in 1750, at a time when foreign interest in this part of the world varied. In opposition to Father Gabriel's more humanitarian goals is Rodrigo Mendoza, played with a subdued fire by Robert De Niro. Mendoza is a slave trader, and it seems the only one bold enough to go that deep into the rainforest to kidnap the Guarani. After Mendoza kills his own brother (Aidan Quinn) in a dispute over a woman, the mercenary seeks his penance in Gabriel's monastic order, giving himself to God and helping to build the mission where the locals will worship. 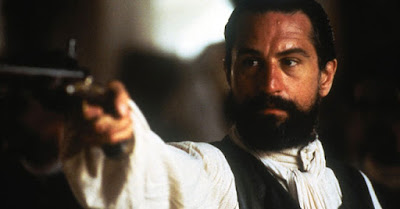 Unfortunately, just because Mendoza has stopped rounding up the natives doesn't mean that the threat is gone. Both Spain and Portugal have interest in the slave trade and the natural resources found in this land, and they don't appreciate the missions creating productive farming communities that compete with their bottom line. The Papacy, hoping to secure the Catholic Church's position in the region while also maintaining power back home, sends a Cardinal (Ray McAnally) to sort the situation out. Though he presents himself as having an open mind and is even moved by the conversions he sees, he ultimately gives the land to Portugal and orders the various missionary outposts to shut down. The Guarani don't want to leave, and despite the threat of excommunication, the monks decide to stand their ground, as well. Only, the two men split once again. Gabriel will put his trust in his faith and stage a peaceful protest; Mendoza will pick up the arms he previously renounced and fight. Who will be more effective?
The Mission is a gorgeous movie. It was shot on location throughout South America, with actual indigenous people performing as the movie's extras. Joffé and cinematographer Chris Menges, who won an Oscar for his work, embrace the majesty of the rainforest and the mighty Paraná River. Their awe of the wild landscape is infectious, and the widescreen photography looks phenomenal in high definition. Watch it on a big TV, and you will feel as if you have taken an expedition to the Amazon. It's an immersive experience, particularly with the way Ennio Morricone's vibrant orchestration further envelopes you. This is a movie that dazzles the senses. 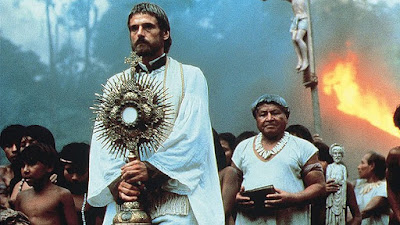 I didn't feel quite the same way about the characters, however. The script is by Robert Bolt, who wrote most of David Lean's more famous historical epics, and though The Mission matches those in scope and ambition, it lacks the soul of a movie like Lawrence of Arabia. I mean that in multiple ways, too. Not only did I not feel like I got to know the characters very well or understand exactly what made them tick, but I didn't feel Joffé was able to communicate the spirituality that was essentially the main motivator for everyone. In that kind of environment, and with cold-hearted capitalists serving as enemies to the pure intentioned, it should have been easy. Yet, while the villains are broadly drawn, the heroes seem like mere sketches.
The actors are not at fault for this. The two leads, in particular, inhabit their roles with convincing purpose. Jeremy Irons is soft-spoken and warm, and his expressive eyes carry many scenes, particularly as his communication with the Guarani is either silent or in the untranslated native language. The script fails Father Gabriel in the final portion of the movie, not giving enough attention to his crisis of faith, instead throwing the narrative support behind Mendoza. This rough beast represents the real arc of the movie, going from a calculating egotist to penitent and then somewhere more in the middle, when he must stand up and act with purpose. De Niro is fantastic, squashing most of the easily imitated mannerisms that he is known for, and delivering a cerebral performance. Mendoza is meditative--a thinker--and when you watch De Niro, you can see the wheels turning in his head. It may also be that I identify with his character more than I do Gabriel, who arguably shies away from his personal responsibility in the destruction of a people. Even if one accepts that he had good intentions, his presence in the jungle is as violent an invasion as the Portuguese marauders.
Which I suppose is where the real thematic resonance of The Mission lies: the rich political subtext. By being offered these two men as our identifying figures, Joffé and Bolt ask us to wrestle with our own conscience. Which would we be? The idealist who embraces nonviolent protest, or the one who acts when circumstances demand a response? It could be that neither option is ideal. The only thing that is sure is neither worked for those caught in the middle.