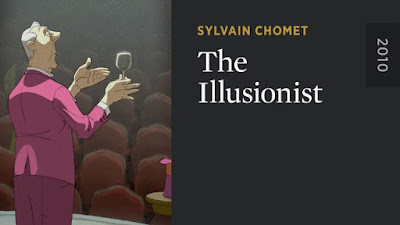 If there is such a thing as a match made in heaven, the animated movie The Illusionist just may be the most convincing evidence of it we'll find here on Earth. This delightful movie is the latest effort by Sylvain Chomet, the gifted director responsible for The Triplets of Belleville. For this new feature, Chomet is adapting an unproduced screenplay by master French filmmaker Jacques Tati. Tati was a comic figure in the mold of Charlie Chaplin, playing the befuddled Monsieur Hulot in a series of films he wrote and directed, including Mon Oncle and what I consider to be his masterpiece, Playtime [review].

The central character of The Illusionist is a magician who looks and acts very much like Hulot; which is to say, Chomet has modeled the stage performer Jacques Tatischeff on Tati--tall, thin, a bit of a hound-dog face. The Illusionist is as Chomet imagined the author would have made it, rejigged slightly for the cartoon format, but otherwise very much in the spirit of the tale's originator. 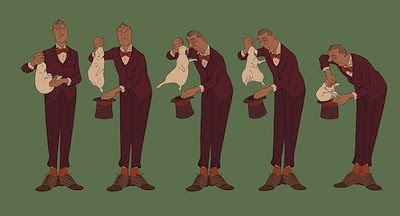 The Illusionist is set in the late-1950s (the movie's most concrete reference to a specific time is a newspaper with a headline about the chilly relationship between Nixon and Khrushchev, which would have been during Eisenhower's Presidency). An aging stage magician, finding himself out of work in France, hits the road in search of a new gig. In London, he is upstaged by an hilariously effete rock band before being reduced to playing an outdoor party. There, a drunken Scotsman invites him out to his village, where the magician sets up in the local pub. His act goes down a storm. His tricks have a particular effect on the poverty-stricken, teenaged barmaid Alice, who isn't aware that the objects the man makes appear out of thin air aren't actually coming out of thin air. She believes magic is real and that the conjurer can make anything he wants.

Enchanted as she is by Tatischeff, Alice follows him when he leaves for Edinburgh, and touched by her devotion, the magician takes her under his care. Her appetite for new things is too hard for him to keep up with, however, particularly in light of his profession's flagging popularity. New technology and new sounds are pushing out the old music hall routines--Alice and the magician live in an apartment building with acrobats, ventriloquists, and clowns, all of whom are having trouble keeping their acts alive. Eventually, Tatischeff has to start moonlighting doing other jobs just to make ends meet.

Describing the basic plot of The Illusionist does it little justice. Tati emulated silent comedy, and he was more interested in humorous scenarios, quiet slapstick, and elaborate scenic concoctions than he was in traditional narrative. His movies rarely had dialogue--and indeed, there are only a handful of complete sentences spoken here, and most of those are either in French or Gaelic (I believe). In the same way Chaplin resisted talkies because they restricted which borders a movie could cross, so too did Tati strive for the universal by favoring behavior over banter. Laughter knows no language, and he communicated more with a gesture than most do with whole paragraphs. 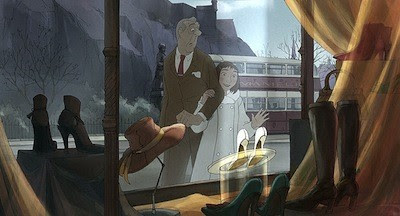 It is to Chomet's supreme victory, then, that he so perfectly conjures his own illusion: the essence of Tati. The magician is an exact replica of Hulot, and yet doesn't exist as some mere carbon copy. This isn't another soulless digital manipulation made for a cola commercial; rather, this is more like an animated séance, of bringing the legend back from beyond the grave, and by using traditional hand-drawn animation (with just a smattering of digital effects), Chomet creates a supernatural dreamscape for Tati to once again perform his pratfalls, huff his harrumphs, and fill new audiences with laughter. The Illusionist is beautifully rendered. The backgrounds teem with a warm nostalgia while the portrayals of everyone from a sad-eyed French chanteuse to a greedy booking agent meld Tati's perception of human nature with the incisive wit of caricature. Chomet also takes liberties with the animals that occupy his world, giving them their own personalities far beyond what Tati could have achieved with the real thing. (Though, I must say, I would have loved to see the flesh-and-blood actor messing around with an honest-to-goodness rabbit.)

As traditional hand-drawn animation continues to become just that, "tradition," it's hard not to greet every movie that bucks the trend as the last of a dying breed. Fittingly, Tati's screenplay already had plenty to say about changing tastes and the obsolescence of old-style entertainment. This gives The Illusionist a surprisingly bittersweet tone in its final act. As his peers drift into other things or have their souls crushed, so too does Alice find other distractions, losing her need for the old man. For Tati, who was as fascinated and amused by technology as he was concerned about its effect on society, the ending is surprisingly concrete. Perhaps this contributed to why he never made The Illusionist himself, it would have required his saying good-bye to an art form he wasn't ready to let go of. Instead, Chomet has made that farewell for him, and done so as tribute. The Illusionist is its own long-distance wave goodbye to a one-of-a-kind performer, a wonderful ode to all that could have been. 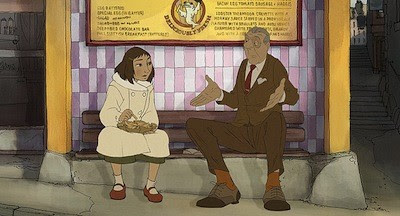