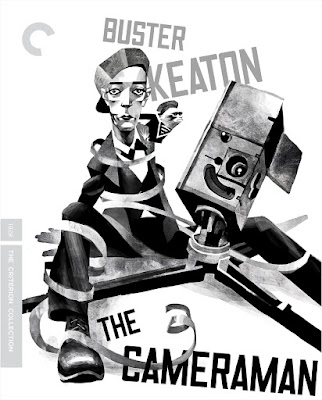 Buster Keaton was an independent producer and director making his own starring vehicles in the silent era when, in 1928, he decided to sign on with MGM and let them foot the bill. This was despite warnings from his friends and peers, who didn’t see why a successful artist would give up his freedom and control. Keaton probably should have listened, as MGM immediately paired him with a director, Edward Sedgwick, and though their collaborations yielded some excellent funny business, it does feel like something is different in the two features offered on Criterion’s release of The Cameraman.
Before criticizing things, though, it should be noted that there is much to rejoice about in this new 4K restoration. Though still missing three minutes of footage, this is the most complete version of The Camerman that anyone has seen in quite some time. The picture is clear and beautiful, and it allows for a fresh perspective of this pivotal moment in Keaton’s career. The score is also very good, enhancing the picture as necessary without overplaying the comedic actions or trying to hard to mimic what is onscreen (the same cannot be said for the music on the second film). 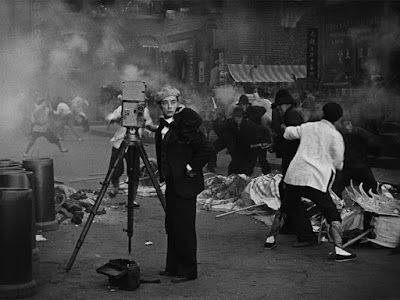 The scenario as devised by Clyde Bruckman and Lew Lipton sees Buster playing a street portrait photographer who falls for a beautiful girl (Marceline Day), whose picture he takes before she is whisked away by her boyfriend (Harold Goodwin). The fella, Stagg, is a cameraman for MGM newsreels, and Buster decides to get his own movie camera and join the freelance crew as a way to get close to Sally. What follows are plenty of mishaps as Buster tries to figure out the business, finds a monkey to be his pal, and gets tangled in a Chinatown gang war. The latter sequence is incredible for the chaos and mayhem that erupts on the screen. There is a real sense of peril, and we fear for our stone-faced hero.
This is probably the closest we get to a vintage Buster Keaton situation. His previous comedies all have a sense of danger, as his elaborate set-ups and stunts would consistently put him in harm’s way, only for him to stumble through unharmed. Most of the gags in The Cameraman are dialed way back from what audiences would have expected from Buster. Weirdly, we get more wordplay in the title cards than ever before, which is not really what we signed up for. We also get more romance. If anything replaces the danger, it’s an increased sweetness. Sure, we’ve seen Keaton work the love angle before in pictures like Battling Butler, but there is a dogged earnestness to The Cameraman that is almost less effective because it replaces his trademark cluelessness with confidence. 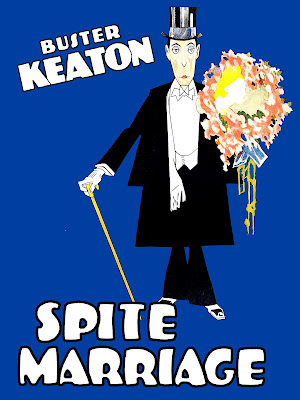 In truth, The Cameraman and the second feature on the disc, 1929’s Spite Marriage, also directed by Sedgwick, remind me more of classic Charlie Chaplin than classic Buster Keaton. The relationship of City Lights comes to mind, where we root for the Little Tramp to win the blind girl’s heart. It’s not that we don’t also root for Buster in his other films, but I think we are more inclined to see him take a licking, his famously rigid face keeping us from being nearly as invested in his well-being. Perhaps this was what MGM was hoping to undo, thinking that maybe making him more like Charlie he could start to outpace the other man’s success. 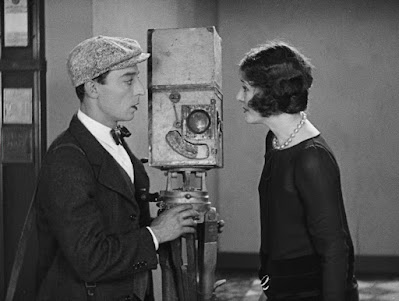 It’s hard to say. And it’s also still hard not to like both The Cameraman and Spite Marriage. Both are very funny. Spite Marriage even features one of Keaton’s most lauded bits, when he has to put his drunk wife to bed. It a routine he would perform live for many years to come. It’s just some of the inventiveness is gone. The precarious situations, the elaborate sets, the prop work, the daredevil stunts--these are all dialed back.
You know what it is, actually? It’s that Buster Keaton was always the little guy standing up to an indifferent world that consistently outsized him. Just as MGM took away his full control, so too did they shrink the threats. It levels the playing field, it’s not nearly the contest it once was. Buster is still the champ, but fighting in his own weight class, and so the victory is not as sweet. While the performer has the charm to be a rom-com lead, it’s not what he really made his name on, and it’s a classic example of the business side of show business not really understanding the show. 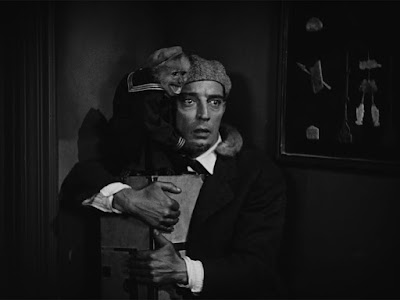 This disc provided by the Criterion Collection for purposes of review.
Posted by Jamie S. Rich at 7:13 PM