This review originally written in 2005 for my Confessions of a Pop Fan blog.' 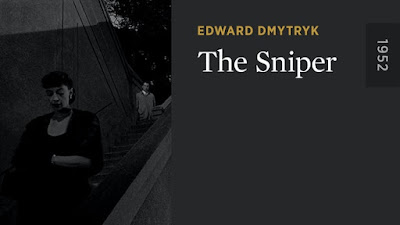 The Sniper is a 1952 release from director Edward Dmytryk, also known for Murder, My Sweet and The End of the Affair. Dmytryk really has to struggle against some heavy-handed material here. The film stops dead twice as the police psychologist explains his theories about sexual predators and the proper course of treatment, but even as these monologues grate on modern ears, you have to appreciate the progressiveness in even approaching the subject. The titular sniper is a disturbed young man who has developed an obsessive hatred of women, and he is compelled to climb the rooftops of San Francisco and shoot ones he feels have done him wrong. Arthur Franz plays the killer as a lost soul who just wants to belong somewhere, only to find himself barred from the social situations he finds himself in. He goes from placid happiness to rage to self-loathing and guilt all in the course of single scenes, the smallest slight setting him off. It all has an unexplained connection to baseball, stemming from his first violent outburst as a child, and it comes to the fore at a carnival where an obnoxious woman in a dunking tank game taunts customers. Franz buys nine balls, sinking the woman five times in a row before really losing his cool and hurtling the rest of the balls at the tank itself. It's explosive, and makes perfect sense for a character overcome by irrational anger.

The movie truly shines, though, when we focus on the cops (including the amusingly named Lt. Frank Kafka), who approach the crime scenes with a gallows humor and a dogged determination they never quite let show. The best scene is when a parade of sex perverts is led through an open interrogation where they are more ridiculed than questioned, the sort of snarky bad-cop interrogation that has become a staple of police stories. Dmytryk's fantastic location shooting is another high point, adding a realistic touch to the film. The steep San Francisco streets seem to personify the sniper's internal struggle: he can never walk normally on even ground.