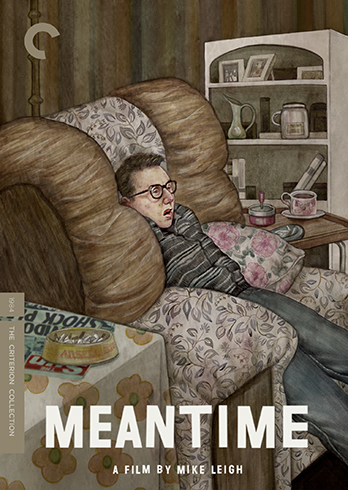 For those of us music fans who romanticize 1980s Britain, let Mike Leigh’s 1984 television movie Meantime be our wake-up call. Whether we dream of the beautifully dreary poetry of the Smiths and New Order or the New Romantic-glitz of early Duran Duran, our belief that it would have been an extraordinary time to be alive and English is based on a false ideal that borders on ghetto tourism. Sure, the hopelessness and boredom of Leigh’s tale is the same kind of situation that gave us Morrissey and Ian Curtis and Martin Gore, but it didn’t make philosophers and kings of everyone. We can hear the music without having to eek out an existence under Thatcher’srule.

Set in a London tenement, Meantime follows an out-of-work working class family--father, mother, and two adult sons--who struggle to get by, packed into a counsel estate apartment, living off unemployment. While Frank (Jeff Robert) has settled into a certain contentment doing nothing, largely enabled by his put-upon wife Mavis (Pam Ferris), his two boys are finding it hard to feel the hours ooze by without going mad. To cope, they go to opposite ends. Mark (Phil Daniels, Quadrophenia [review]) is caustic and confrontational, a prototype of David Thewlis in Leigh’s masterpiece, Naked, while Colin (Tim Roth, The Hit, The Hateful Eight) is quiet and withdrawn, and perhaps a bit behind developmentally. As we watch them kick against the nothingness across the length of Meantime, we will see the sibling dynamic at work, rivalry providing its own kind of support. Mark tears Colin down only to prop him back up (sort of). 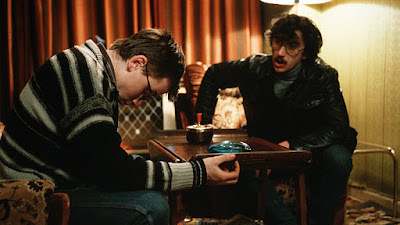 Famous for improvising his material with his actors (Leigh is credited as having “devised” the film rather than having written it), Meantime’s drama is less plot and more situational. There are many scenes of doing nothing, of being trapped in the flat or down at the pub, the ennui inspiring cruelty, family and friends picking at each other. It’s a difficult dynamic to watch. Leigh risks inspiring annoyance in his audience, as well as a potential harsh reaction to how little these men seemingly do to help themselves. A scene down at the unemployment office sees both Frank and Mark abusing the woman who gives them their check; the opening of the film shows the family visiting middle-class relatives (Marion Bailey and Alfred Molina) and being passive-aggressively hostile toward their hospitality.

Yet, as we watch events unfold, it becomes clear that their idle state is not laziness, but a combination of defeat and pride. They have accepted that this is their lot, and there is little option for something better; at the same time, the few available options are pitiable scraps, more off-handed charity than considered solution. No one is offering them a viable choice to improve.

And while, yes, characters in Meantime can be annoying, watching them is anything but thanks to Leigh’s remarkable cast. While Daniels had plenty of work under his belt by this time, Meantime was a breakthrough for both Tim Roth and Gary Oldman, who plays Coxy, a brash skinhead. Oldman’s performance is physical, charismatic, and odd, his belching cadence predicting both his turn as Sid Vicious in Sid & Nancy [review], and his many villain roles. Coxy is the perfect example of the wayward youth who gloms on to some kind of social movement or manufactured identity to mask his own weakness--which we catch a brief glimpse of in an unsettling scene where Coxy is called on his racist bullshit in an elevator. Oldman says little in the moment, but his vulnerability is evident in his face and body language. Alternately, Roth is restrained, his angst and anger all bottled up, presenting a false gentleness rather than a trumped-up bravado. In some ways, the actors would swap these roles a few years down the road in Tom Stoppard’s Rosencrantz and Guildenstern are Dead, Roth going nuclear and Oldman adopting a genial ignorance. 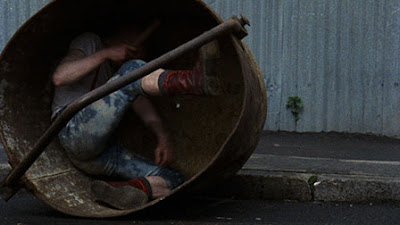 Leigh and director of photography Roger Pratt (Brazil, Mona Lisa) use the limitations of television to their advantage, achieving a lo-fi realism befitting the story. Shot on location, and contrasting the cramped apartments with the wide open spaces that these aimless young adults wander in search of something, anything to occupy the time, the outside world in Meantime is vast and endless, but offering no additional shelter or purpose, except to maybe make the characters feel smaller and more meaningless. (For contrast, see Oldman’s Coxy tucked into a big cylinder, trying to move, banging on the walls impotently...) Leigh’s England is as moody and gray as Joy Division’s, though a lot less tuneful. I don’t know if Andrew Dickson’s score is intentionally monotonous to match the repetition of the characters’ day-to-day, but its constant presence eventually serves to distract rather than enhance. But then, it’s also kind of emotionless to begin with.


All the more impressive, then, that Leigh ends Meantime so warmly, with Mark pulling his brother back from the brink after his pettiness sent Colin in the wrong direction. It’s an error corrected not even by kindness, but simply by devoting a moment to listen. Sure, the real ending suggests that once they are over that hump, the whole family will return to business as usual, but when every day is harsh, the small oases can mean a whole lot. Now if only the boys could take those brief bursts of energy and form a band....