Originally written for DVDTalk.com as part of a review of the Alfred Hitchcock Premiere Collection. 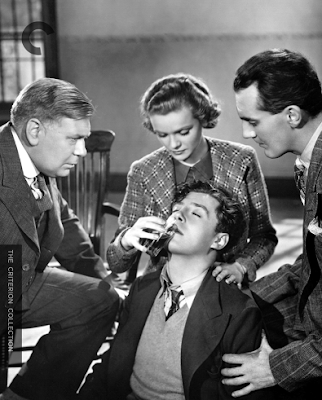 Though arguably a minor Hitchcock effort, this fugitive story is also prototypically Hitchcock, showcasing a man wrongfully accused on the run, searching for the one object that will clear his name. In this case, it's a stolen raincoat, and if down-on-his-luck movie writer Robert Tisdall (Derrick De Marney, Spitfire) can find it, he can prove he didn't kill the actress whom he may or may not have been having an affair with. Helping him on his flight from justice, at first reluctantly and then with the romantic fervor befitting the teenage heart, is no less than the constable's daughter, Erica (Nova Pilbeam, previously in the original The Man Who Knew Too Much [review]). The more Erica becomes convinced of Robert's innocence, the more dangerous the situation gets--both her life and her heart are under threat.

Both De Marney and Pilbeam are fairly charming in the leads, though neither of them really distinguishes themselves as stars on the rise. The true stars of Young and Innocent are the many back-road locales Hitchcock takes us to, flitting between opulent country estates and rundown flop houses. The Tisdall character has basically been living his recent life as a tramp, and tracking his coat takes him and the girl deeper into the poor underbelly of 1930s England. Thus, the Innocent of the title both refers to Robert in terms of his involvement in the killing and Erica in terms of the life lesson she will learn. In some ways, she prefigures the young girl in Hitchcock's Shadow of a Doubt who discovers that the way of life she has been raised to believe in may harbor darker shades of morality, including gray areas that aren't as simple as her law-enforcing father would have her believe. (This black-and-white world is also very much a man's world, as evinced by Erica being the only daughter in a motherless clan of boys.)

The tone of Young and Innocent is pretty light, with lots of humor and, of course, a healthy dollop of romance. Hitchcock has some fun with bumbling cops, but also is fairly ambitious in some of the action sequences, showing cars racing trains and one harrowing scene inside a collapsing mine. 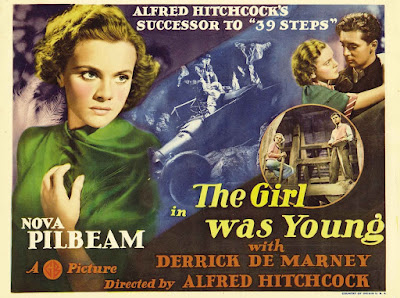