This review originally published in 2010 on DVDTalk.com. 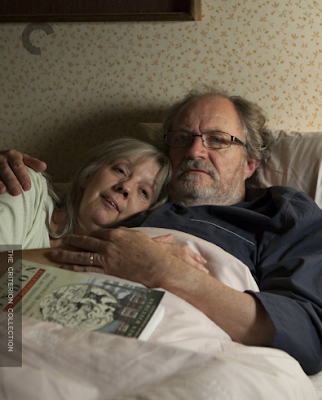 Mike Leigh's new movie Another Year isn't a day-in-the-life movie, it's a 365-days-in-the-life movie. The drama follows a group of friends and family over four seasons, spring to winter, through their personal ups and downs, some small and maddeningly trivial, some large.

At the center of Another Year is one stalwart couple. Tom and Gerri, played with personality and heart by Jim Broadbent and Ruth Sheen, have been together since they were teenagers, and their marriage couldn't be better. He is a geologist who studies soil to determine the safety of different building projects around London; she is a counselor at a health clinic. Together, they work on a small patch of land in a community garden, growing their own vegetables, enjoying the shared work. These are people who we trust have made most of the right choices in life. Even their son, Joe (Oliver Maltman), a lawyer who takes on special hardship cases, seems to have turned out all right. Good spouses, good parents. 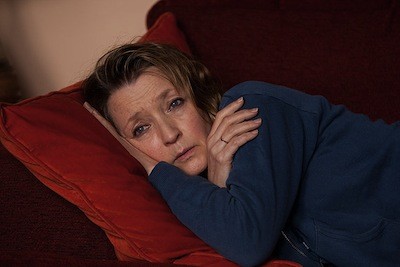 By contrast, their friends don't have it together. Gerri's workplace friend, Mary (Lesley Manville), is a bundle of nervous energy, a middle-aged woman with no one in her life. Her constant chatter will annoy you. It's supposed to. It annoys everyone else in the movie, too. She drinks too much, maybe has a crush on Tom, definitely has one on Joe. When Tom's old friend Ken (Peter Wight), an overweight, going-nowhere career man, visits, he expresses his own feelings for Mary. She rejects him, and is more than cruel in her judgment of this other lost soul. It just goes to show you, no one is so far down in life that they can't find someone else to judge as harshly as others judge them.

Leigh structures his movie to match the moods of the passing seasons. Spring is hopeful, summer is happy, fall brings disappointment, and winter delivers heartache. The cold climes also inspire the group to huddle together, to reconnoiter, and in a way, make peace--though honestly, we're not sure how well that will actually work. Another Year begins with an emotional gut punch--Gerri tries to help an older woman (Imelda Staunton) with her insomnia, but the woman is so resigned to her fate, there seems to be no way out for her. (Staunton is unforgettable in the short screen time she has; she is so bitter and angry, she looks like she will spontaneously turn to stone at any second.) The writer/director also ends on a note of brutal heartbreak, a question mark hanging in the silent air as the film fades to black.

Yet, to cast Another Year as a downer drama would do the film a disservice. Sure, it's tough going at times, and the grief it portrays will follow you around for some time to come, but it doesn't necessarily inspire the same sadness in the viewer. Rather, Leigh is provoking us to think about our own lives and how we deal with others. The writing in Another Year is amazing. Leigh has a true knack for small talk, arranging banalities like a sophisticated puzzle, finding more poetry in his characters' anxious utterances than he could ever wring out of a formal soliloquy. What a person says without meaning to say it is more illuminating than an intentional confession or revelation. 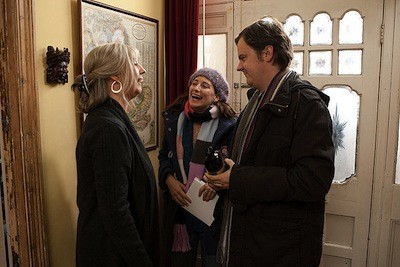 He's also quite good at making us feel sorry for characters who otherwise drive us up the wall. It's similar to how he handled Sally Hawkins' character in the marvelous Happy-Go-Lucky [review]: these chatterboxes are so achingly human, we can't help but be caught up in their struggles. Neither Ken nor Mary, or any of the other supporting players we meet, ever really intended to end up alone and broken. Leigh shows us how fragile they are, and presumably, this is what Tom and Gerri see in them, as well, and what keeps them from sending the friends away. Not that the couple are doormats. They take their stands when it counts. The subtlety of the performances cannot be praised enough. Jim Broadbent and Ruth Sheen manage a real back and forth, finishing each other's sentences, often sharing secret reactions through a look or a gesture. These are mature actors who understand what a mature relationship entails. You can believe that Tom and Gerri have honestly spent all those years together.

They also give us much to laugh at. Another Year isn't just twelve months of tears. The banter can be funny, and even Mary's endless string of mishaps has some comedic value. We critics spend a lot of time bandying about terms like "realism," usually for cheaply filmed verité-style films with loosely crafted dialogue; it's a whole other accomplishment when a filmmaker harnesses the engine of true experiences and infuses his art with it. Another Year's construction is delicate, and outside of the signals of time passing, barely perceptible. The drama moves in small, evocative ways. Even the music works its magic subtly. Gary Yershon supplies Leigh with short, almost insubstantial cues, and Leigh peppers these tiny snippets of instrumentation throughout, leading us from moment to moment, at times preparing us for the shifts in feeling.

It's refreshing to see a movie that isn't afraid to be many things and is adept at being all of them. Too often, when filmmakers try to inject humor into a heavy situation, or when a moral is tacked onto a comedy, the efforts feel forced. Another Year comes by its many moods naturally and is all the more touching for it. 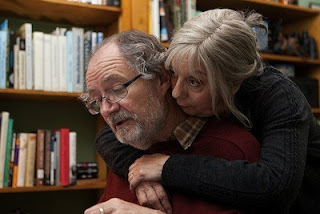