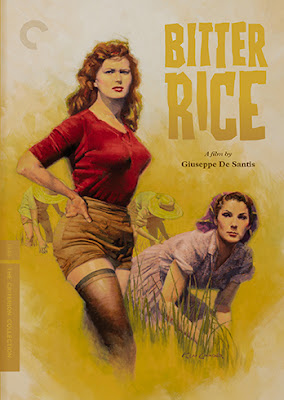 The bulk of the story is set in the rice fields of Vercelli, a place nomadic workers travel to for 40 days at a time to harvest the current crop and plant the next one. It’s at the train yard the day the workers are supposed to ship off  where two thieves hope to mix in with the crowd and get away with stolen jewels. Except one of the pair, Walter (Vittorio Gassman, Big Deal on Madonna Street), has been made and the cops are on scene to nab him. He makes a run for it, leaving Francesca (Doris Dowling) with the loot. With the help of Silvana (Silvana Mangano, The Decameron [review]), Francesca gets a job with the rice crew--albeit an illegal one, since official contracts have all been handed out already. Silvana is experienced with the system, and is also experienced manipulating people. We are introduced to this spitfire when she is dancing in the train yard to a jazz tune playing on her portable record player. All attention turns to her. Like many a femme fatale before her, Silvana knows she is desired and takes the power that comes with it.

Only, the femme isn’t all that fatale. Or nearly as experienced as she thinks. Though she quickly susses out the truth about Francesca and why she is running away, Silvana is not prepared for the consequences of getting tangled up with dangerous people. When Walter comes looking for Francesca, he sets his eyes on the new girl. Silvana immediately forgets the cautionary tale that Francesca spun for her, about how Walter got his hooks in her and she can’t escape. He is a manipulator himself, and an abusive one at that. By the end of Bitter Rice, the women will have switched places. Francesca will learn the value of hard work, while Silvana will learn the downside of chasing a quick score. 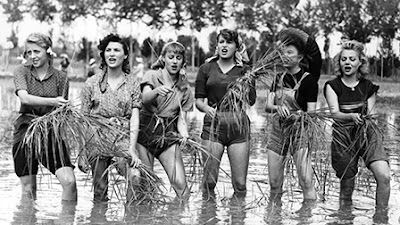 There are many twists and reversals to be found as Bitter Rice progresses. The jewels change hands, Silvana tries to get Francesca kicked out of the camp, they make up and become friends--it’s both melodrama and pulpy crime. A handsome soldier, Marco (Raf Vallone), proves to be equal parts conscience and romantic distraction. And there is another heist yet to be planned.

Giuseppe De Santis creates a seductive amalgam of post-War Italian cinema and contemporary Hollywood Bs. His premise is rooted in reality, even if his plot is thoroughly hardboiled. Bitter Rice opens with a radio correspondent addressing the film-going audience and laying out all the details about Italy’s rice production and why the industry relies on women to do the picking (small, fast hands). The director could have easily made a film about the conditions of the migrant workers and the politics of the system, but rather than make a polemic, he uses the unique setting as his foundation. Rather than let the romantic quartet of criminals and their opposition be the sole focus, he lets the film breathe, moving away from their machinations to show us other characters. Bitter Rice has a large cast, and its narrative is brimming with life. We first see this early on, with the first of many beautiful tracking shots executed by De Santis and cinematographer Otello Martelli (a regular collaborator of Rossellini and Fellini, he shot both Paisan [review] and La dolce vita [review], among others). While seeking out the source of Francesca’s music, the camera pans across the train cars, and in every window, we catch glimpses of an individual existence. Each passenger is given action and purpose. 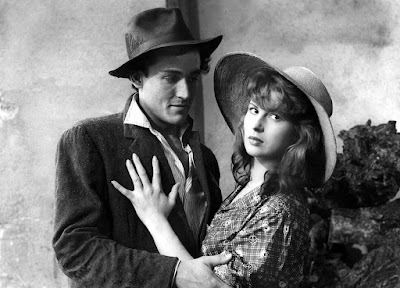 So, too, are the ladies that form the workforce at the rice fields. Several emerge as key players and return again and again. We see a lot of them in another elaborate, uncut take, as men come to the work site to catcall, and the ladies answer back, generally giving as good as they get (though, amusingly, Francesca is noticeably annoyed, as separate as ever). Again and again, De Santis will choreograph this kind of sequence to show us the full crowd, and to create a very real backdrop for the rest of his plot to play out.

Infused in all that are little nuggets about workers’ rights, fair treatment, class structure, and just general proper community behavior. Francesca initially takes to the work out of opportunity, but she bonds with the other women and comes to appreciate what it means to stick her hands in the soil and make something grow. Thus, when Walter starts to focus on the rice itself for his next crime, she can’t go along. She offers the age-old justification: when they stole from people who could afford it, it was okay, but stealing from people who toiled over something and leaving them nothing to show for it is despicable. (Never mind that several tons of rice doesn’t seem like the easiest thing to go fence. Walter doesn’t strike me as the type of guy who thinks things through.) While Mangano gets the showier performance--and with it, a different kind of attention from the camera--Dowling makes a more subtle transformation. With her perfect posture and dark eyes, she could be misconstrued as overly arch, but it fits Francesca, who begins the picture completely on guard, but ends it in a more empathetic place, yet without surrendering any of her strength. 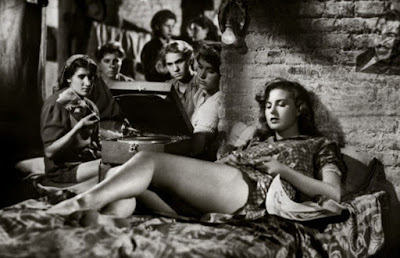 The final half hour of Bitter Rice is an exceptional orchestration. As the workers plan to celebrate their last day with a wedding, Walter and his new gang put their scheme into motion. De Santis jumps around, taking in all the action, building tension, and then releasing all of his players to their fate. It’s quite riveting, and ultimately satisfying. Crime, as per usual, doesn’t pay, and virtue is rewarded, but that reward is hard earned. The final image of the film encapsulates all these things, with ultimate respect being paid to the more sustainable values, the things that Silvana once knew but has rebuked, and that Francesca has come to anew. 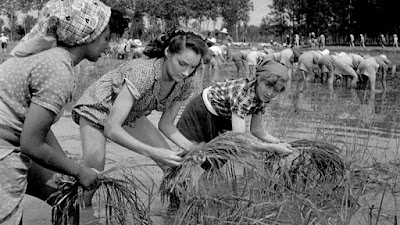