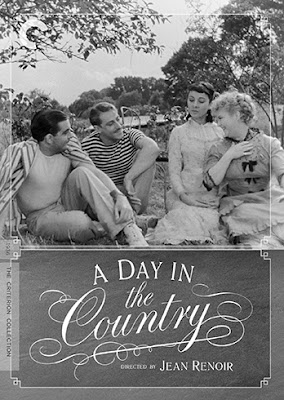 After watching Lonesome last week, it seemed only fitting to chase Paul Fejos’ sublime tale of two lovers meeting on a day trip to Coney Island with Jean Renoir’s short 1936 film A Day inthe Country. It’s another romantic story, though one with complications and more social commentary than Fejos had to offer. If love and romance are true and real in the earlier film, they are a bit more questionable in Renoir, even if they can be just as strongly desired.

Renoir’s movie is based on a story by Guy de Maupassant. It details an afternoon getaway for the Dufours, a Parisian family of middle-class wealth, likely of new money. Monsieur Dufour (André Gabriello) owns a shop, and his wife (Jane Marken) and daughter, Henriette (Sylvia Bataille), don’t seem to lack for the finer things. When the group finds a little out-of-the-way inn along the Seine, they stop to get some food and enjoy the sights of nature. 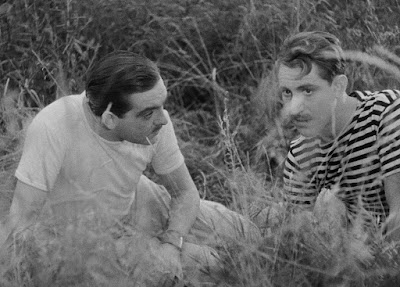 These city folk are immediately spotted and sized up by the locals, and just as he would in his most revered film, The Rules ofthe Game, Renoir balances his story on the divide between the two classes. A pair of layabouts, Henri (Georges D’Arnoux) and Rodolphe (Jacques Brunius), begin scheming to steal the ladies away from their male companions--Dufour brought his dimwitted underling, Anatole (Paul Temps) along--and have a little fun before they move on. It could be a harmless action, or even comical, but there’s more motivating the boys than just lust. As they see it, Parisians are a bit like the cliché of “Ugly Americans.” They go where they want and do as they please and see the rest of the world as there to serve them. So for the more serious and dark Henri, this is a little bit about revenge. He quickly goes from being the reasonable foil to Rodolphe’s clowning, and morphs into a more sinister and calculating villain. He even goes so far as to shove his friend aside to get what he wants.

As the day wears on, it becomes clear that the perception of the Parisians is a bit skewed. Sure, they are demanding, but they are also looking to take part in the world around them. It may be a bit like slumming for them, but it’s also genuine. Dufour is a loudmouth and a boor, but he’s there to fish and enjoy what nature has to offer. When the boys finally engage the family, the out-of-towners are genuine in their friendliness. It’s the reverse of a country bumpkin being taken advantage of by the city slickers. The impending squall doesn’t serve as clear enough metaphor to warn Henriette out of the way. 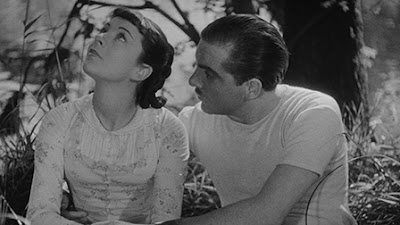 Made in 1936, Renoir designed A Day in the Country as a short film. As he explains in the vintage introduction recorded for a later TV broadcast of the movie, he wanted to see if a short form film could be every bit as complex and artfully crafted as a longer feature, with the idea that three 40 minute movies could be strung together for an evening’s entertainment. Interestingly enough, A Day in the Country was not quite complete when Renoir was pulled away from the production to go make The Lower Depths (and Gabriello and Temps would go with him). It would be some ten years, and the director would have already moved on to Hollywood, before Renoir’s remaining team would assemble the footage and add a few explanatory title cards to hold it together. The final product doesn’t feel unfinished, not even remotely, you’d never notice it if you hadn’t read this (or the back of the Criterion box, or the intro put on the film--everyone wants you to know!). 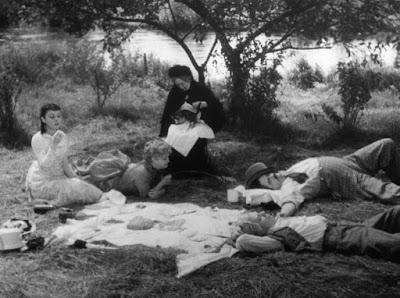 On the contrary, A Day in the Country does exactly what a short film should: it draws its audience into its setting, orients them to the situation, and then leads them to a certain revelation or question, its compactness allowing for the storyteller to be simultaneously more direct and more ambiguous.

This plays out when we see Henri make his move on Henriette. She resists his suggestion to pull the boat into the tall grass by the riverbank and sit alone, but her defenses keep failing. Henri has an answer for everything. The young woman’s resistance continues on the bank, but his persistence proves stronger. Just how does Henriette feel about this? One can only judge by her expressions: refusal, acceptance, regret. There are many potential reactions and consequences to what happens, it’s not some afternoon fling whilst on vacation. A small event looms large, a point Renoir emphasizes in the film’s final scenes when he jumps ahead many years. Henri seems to have added some actual affection to his nostalgic view of what happened, but Henriette’s feelings remain unexplained. In a longer film, with room for a more conventional denouement, or perhaps in less capable hands, this is the moment when the girl would make her feelings explicit. We can only guess why she cries the tears she does, all we know is that she cries them for herself. 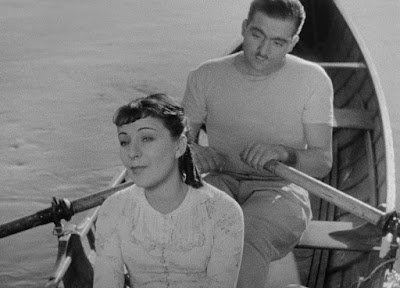 It’s kind of beautiful and brutal all at once, not unlike the remarkable tracking shots of the rain hitting the river that Renoir and his cameraman, his nephew Claude, managed to grab when their location shooting was overtaken by the weather, prompting a rewrite. One can only wonder how differently the sexuality might have appeared had they been able to stick to their original plan to shoot in the heat and sweat of summer. The moody gray makes Henri appear more cold, more predatory; the coupling is devoid of passion. The clouds and the rain recolor everything. The frivolity turns serious. Perhaps this is why Henriette ends up with Anataole, a man of no great significance, a capacity for more has been robbed from her. The lingering question of what might have been could go either way. Sylvia Bataille shows us how much the girl’s heart is broken, even if we could debate over what.

And it’s in this that Renoir elevates a lark into something grand and powerful. By stretching his movie beyond the one afternoon and peering across time, A Day in the Country proves to be something with lingering effect. 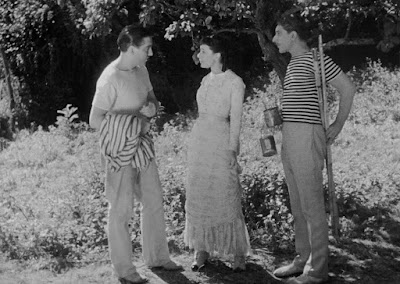