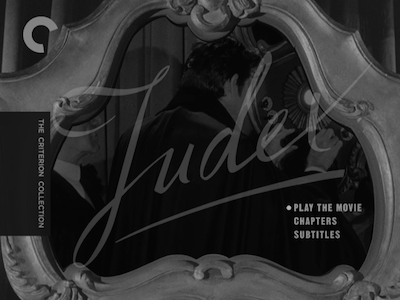 You’re just going to have to indulge outright that there is going to be some self-promotion in this one. It’s bound to happen from time to time. Happened before, will happen again. Sometimes the right paths just cross.

In this case, it’s some fortuitous coincidence that I just now watched the new Blu-ray of Georges Franju’s 1963 pulp homage Judex. This spiritual remake of Louis Feuillade’s 1916 silent cliffhanger

features a mysterious, justice-minded magician (Channing Pollock) intent on making an ethically challenged rich man pay for his crimes. Its roots predate comic books, but Feuillade’s film, as well as his serials Fantomas

and Les vampires [review], drew from and inspired the pulps, and then also inspired the comics industry as it blossomed to life. This Criterion edition even features a cover by artist Ronald Wimberly, himself channeling a little Eduardo Risso, bringing lurid life to Judex’s stonefaced crimefighter and his masked archnemesis. 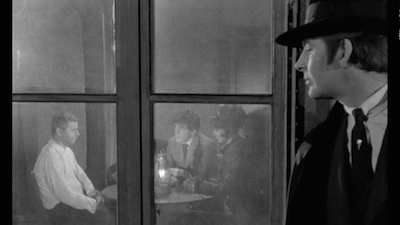 This viewing also happens on the eve of Oni Press releasing a comic book of mine called Archer Coe and the Thousand Natural Shocks. It stars a hypnotist in a classic domino mask looking to stop a murder plot involving a wealthy banker and his emotionally distant wife. Created with artist Dan Christensen, Archer Coe and the Thousand Natural Shocks draws on a long tradition of stoic heroes working their tricks in the dark, from the Shadow to the Spirit to Mandrake the Magician. And yes, even to silent French cinema--or, in this case, 1960s French cinema. Even if it is just a startling coincidence. Though I had seen bits of Feuillade’s Judex while working in a video store, I wasn’t even aware of Franju’s until Criterion announced it was on its way. In my lead-up to Archer Coe, I was watching American noir like Edmund Goulding’s Nightmare Alley

; judging by the evidence, it’s almost like I tapped into some Jungian story space to draw directly from the Judex redo, as well.

The plot I’ve hinted at in the above is not much more complicated that what I’ve suggested. An oily banker (Michel Vitold) has started receiving threatening notes demanding he give up his fortune to the people he’s wronged or suffer the consequences. The threats are signed “Judex,” or “judge.” Believing himself untouchable, the banker refuses, only to fall down dead at the time his accuser appointed for him. The victim’s daughter Jacqueline (Edith Scob, also in Franju’s Eyes Without a Face and Assayas’ Summer Hours [review]) inherits his fortune, but when she discovers the less-than-savory ways in which daddy earned it, she rejects the money, giving Judex what he sought all along. Meanwhile, the banker’s would-be mistress Diana (Francine Bergé, Mr. Klein

) wants the cash for herself and starts a plot to kill the girl and steal the riches. 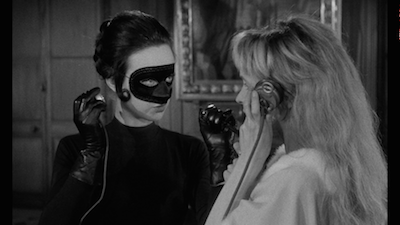 Mimicking the serialized nature of the silent original, Franju maintains an episodic narrative, allowing for an ineffectual private detective (Jacques Jouanneau) to wander in and out of the story, and for Diana to try multiple plots that all go wrong As these occur, Judex lingers around, keeping watch over Jacqueline and manipulating other lives in hopes of bringing about justice. In terms of action, he’s far from Batman. Rather, he tends to be too late and not much of a fighter when he arrives on the scene. His only truly effective moment is early on when he first shows up wearing an elaborate bird’s mask at the banker’s party and performs magic tricks with doves. He appears there as a creepy specter bringing death to the condemned. It’s the closest you’ll ever get to having fun with this guy at a party. 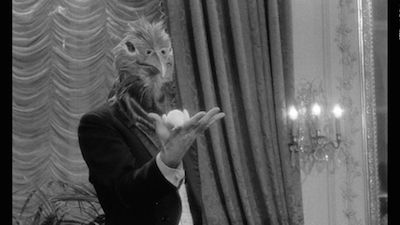 Which turns out to be a major drawback for Franju’s film. For a movie that features both a wicked villainess in a black catsuit and a pretty circus acrobat (Sylva Koscina, Juliet of the Spirits) who randomly shows up to help out, Judex is decidedly unsexy. None of the relationships have much sizzle, nor does the action really ever take off. Instead, this is like a drawing room approximation of a lurid murder mystery: perfectly poised, artfully styled, but maybe too self-aware and too smart for its own good. 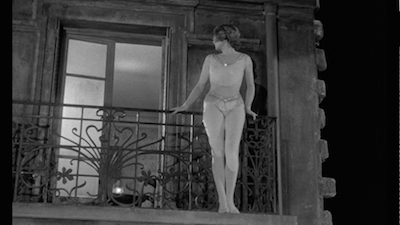 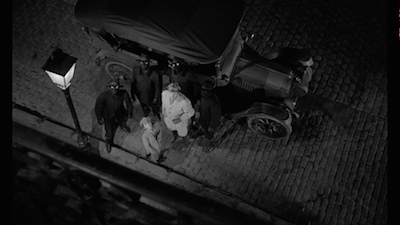 Luckily all of that stylization means Franju has a lot of good will to burn. He also makes a smart choice in his main villain. Francine Bergé is seductively evil, equally at home in a hipster’s dancehall outfit and a nun’s habit. If only the director had effectively let his femme fatale loose on his stuffed-shirt of a hero, Judex could have been a real hoot! (Imagine it in the hands of Henri-Georges Clouzot....)

Maybe I’ll have to resurrect Diana for one of the future adventures of Archer Coe. 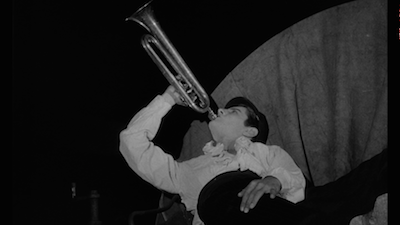 In addition to the sparkling restoration of Judex, Criterion has included a bunch of bonus features on their dual-format release. Amongst those are a recent interview with Bergé, a biographical profile of Franju, and two of the director’s early shorts. One of those, the half-hour Le grand Méliès, pays tribute to the legendary cinematic innovator. Like Feuillade, Méliès was one of Franju’s heroes, and this mini-biopic both tells Méliès’ story and adopts some of his techniques. Featuring the filmmaker’s widow as herself, and their son Andre as his father, Le grand Méliès recreates the post-war years when the artist ran a toy shop in a train station (as seen in Scorsese’s Hugo

), one of his magical stage shows, and his journey as an early cinema pioneer, culminating in making A Trip to the Moon. It’s a loving little doff of the cap from one director back through time to another. 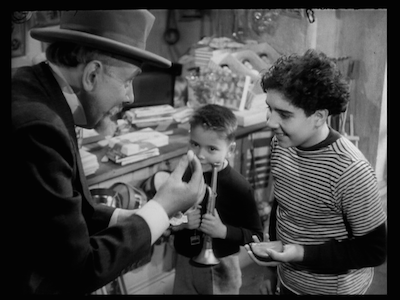