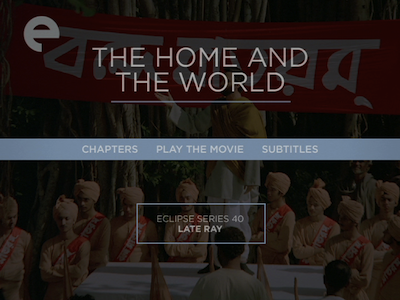 By the time master Indian filmmaker Satyajit Ray made his 1984 film The Home and the World, he had been directing movies for nearly thirty years. This film, and the others that make up the trio of movies in the 40th Eclipse Series boxed set Late Ray, show the confidence of all those years of experience, even if maybe the passion in the story doesn't come through with the same kind of vivacity as it might have previously.

Based on a novel by Rabindranath Tagore, who also provided the story for Ray's movie Charulata twenty years prior, The Home and the World is a drama set in a wealthy household at the turn of the 20th Century, a time of political and social change. Nikhil (Victor Banerjee) has opened his home to his college friend, Sandip (Soumitra Chatterjee, who had worked with Ray since being Apu in his famous Apu Trilogy), the leader of a movement to expel the British occupiers through individual economic sanctions; namely, banning foreign goods and only buying Indian products. Nikhil agrees in theory, but sees the potential damage these boycotts could do to the poor merchants who work in his jurisdiction by limiting their options and also the religious strife it would cause between wealthier Hindu activists and their Muslim neighbors. 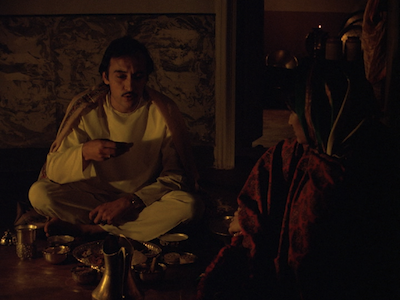 Caught between these two points of view is Bimala (Swatilekha Chatterjee), Nikhil's wife, who prior to Sandip's arrival has lived according to a tradition where a wife does not leave the house once she has taken her marriage vows. Nikhil has always encouraged his spouse to live free, and her friendship with Sandip inspires her to finally venture outdoors, even if only to see him. She finds the allure of this impassioned speaker irresistible, and the opportunistic politician takes advantage of her innocence. This love triangle is the driving force of The Home and the World, setting up its essential conflicts. The steady, thoughtful, and progressive Nikhil must contend with the more reckless--and ultimately self-serving--Sandip, with Bimala bouncing in between, trying to parse the truth from the compelling fictions. 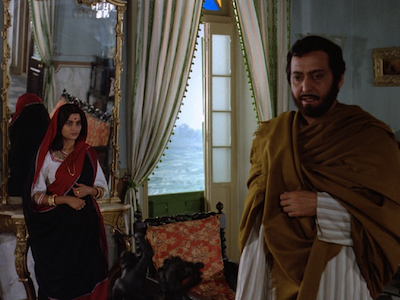 The Home and the World has some interesting ideas to wrestle with, but Ray's telling is fairly dry. The sexless romance lacks the sense of stifled desire that allows other period pieces of this nature, such as Scorsese's Age of Innocence

or James Ivory's The Remains of the Day

, to overcome the lack of physical heat. There isn't much draw here. Perhaps the problem is that Sandip isn't that compelling a scoundrel. His flaws are far too obvious. Nikhil's arc is much more fascinating, particularly once the pacifist has to take up arms to fix his friend's mistakes.

On the upside, Ray's attention to details, including period sets and costumes, is excellent, and his steady narrative presentation manages to keep the film moving forward, even as some of the interpersonal drama grows repetitious. You may want to tackle this one over a couple of sittings. It took me three nights to finally finish it off myself. 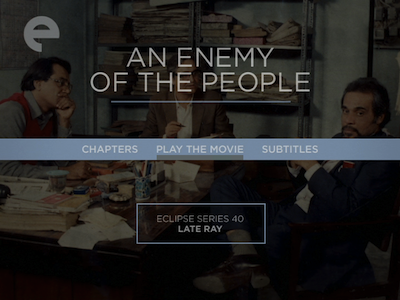 Much better is 1989's An Enemy of the People. Health concerns forced Ray to lessen the scope of his production, and it makes for a more succinct, incisive drama. Five years passed in between the The Home and the World and An Enemy of the People because the filmmaker was recovering from a heart attack he suffered near the end of The Home's production. For this follow-up, Ray once again turned to an older text, this time updating it for a modern context. An Enemy of the People is an adaptation of the 1882 Henrik Ibsen play of the same name, transplanted to India and modernized.

Soumitra Chatterjee returns as Dr. Ashoke Gupta, a mild-mannered medical practitioner concerned about the increase of jaundice and hepatitis amongst the local population of his Bengali residence. These are diseases not common to the area, and he believes that an introduction of new contaminants to the water supply is responsible. Further investigation bears this out. Most troubling, though, is the pollution's connection to the town's Hindu temple. The holy water the worshipers partake in is infected, as well. 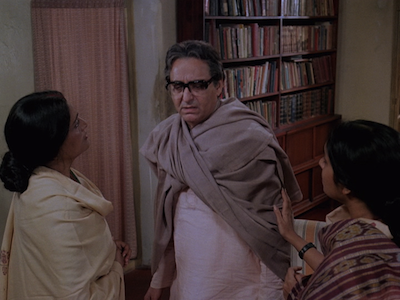 It's this last bit that causes Gupta the most trouble. The temple has become a tourist attraction and pilgrimage destination, and the city leaders who profit from this influx of travelers do not want to see its reputation damaged. Dr. Gupta's younger brother Nisith (Dhritiman Chatterjee) takes a hard stand against his sibling, getting both the temple and the local newspapers involved, stirring up religious fervor to stifle the doc's health warnings. 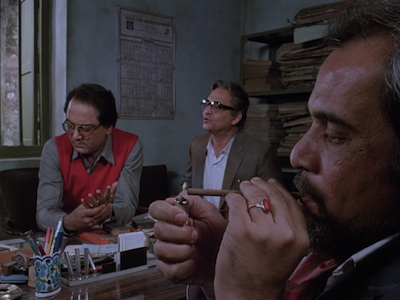 The theatrical origins of An Enemy of the People is still quite evident in Ray's production. Most of the action takes place on three different sets, with each scene clearly demarcated by the shift in between. Enemy is a talking-heads movie, with bits of clumsy exposition here and there to orient the viewer to who is who. There is also some character shorthand, with the costume designer in particular typecasting through wardrobe. Nisith, for instance, dresses in Western-style clothes that make him look like a villain in a British drama; the morally weak newspaper editor wears a sweater vest and big glasses, the stereotype of a milquetoast liberal. These decisions mean much of Enemy comes off as starchy, but the source material and the cast largely overcome this problem. Soumitra Chatterjee is especially good in the lead, playing a man overtaken by his ideals and ill-equipped to apply them in the real world. His belief in the rightness of things means he can be taken advantage of and betrayed with surprising ease. It's a testament to Ibsen's initial premise that the issues he raised still applied to India over a hundred years later, and could easily be adopted to our own culture today. It was apparently Ray who added the religious element to the story, which makes it even more potent to a modern society that, maddeningly, still has to contend with religious obstinacy blocking the way of scientific advancement and common sense practices. 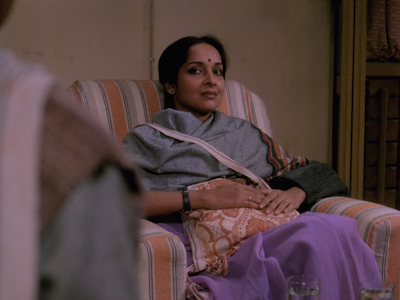 Also quite good is Mamata Shanker as Gupta's daughter. She represents the younger generation and is the sort of atypical progressive female that Ibsen was known for. Her character has some of the most nuanced story points in the screenplay, and her decisions are effectively juxtaposed with the more old-fashioned beliefs of her mother (Ruma Guha Thakurta). 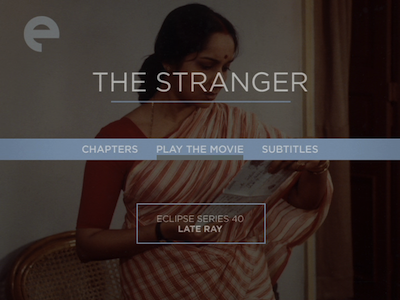 There is also a bit of a clash of old values and new skepticism integral to Ray's final film, and the best of the set, 1991's The Stranger. The auteur, as per usual, wrote and directed and composed the music, though he did so from his sick bed, an impressive fact to consider. The Stranger is as solid a film as you're likely to find, constructed skillfully and featuring finely tuned performances. It sags at times, mostly when we get a song or dance number, but it seems fitting that a revered filmmaker's final effort should speak with such clarity about identity and what is and is not knowable.

Utpal Dutt plays Manamohan Mitra, the stranger of the title, a world traveler who gave in to his self-described wanderlust 35 years ago and left Calcutta to see the world. He has now returned, much to the surprise of his only living relative, his niece Anila (Mamata Shankar). She is sceptical of his true identity, but willing to take the risk; her husband, Sudhindra (Dipankar Day), is not so open-minded. He thinks this is a scam. The returning uncle's willing acceptance of their doubt does little to assuage it. (In this, he is maybe similar to Sandip in The Home and the World, in that the man puts his own contradictions front and center. Compare, for instance, Sandip's addiction to European cigarettes.) 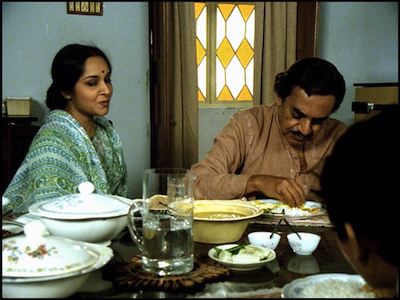 The Stranger is basically a series of challenges as different people confront Manamohan and try to challenge his story. His deft dismissal of these disputes could be interpreted as proof that he is who he says he is, or just further confirmation that he's a skilled con man. The situation grows more complicated and suspicious when it's realized that there is a long unclaimed inheritance at stake in addition to whatever personal connections Manamohan will reclaim. Dutt is a shrewd actor, never really tipping his hand. You'll likely only lean one way or the other when the weary nomad begins to grow tired of the endless interrogation. Even then, you might find yourself still waiting for him to pull the rug out and contradict whatever it is you'd decided.

There is a fascinating psychology at work in The Stranger, though it's not necessarily that of the stranger himself. He remains a bit of a cipher even up until the end. Rather, Ray has figured out that the really interesting story here is how others react to the man, and he concocts scenarios where we can see a broad range of personalities interacting with Manamohan. In one case, it is an actor intrigued by the backstory; in another, it's a lawyer used to dealing with cynical con men. 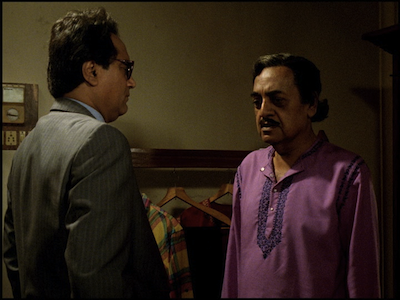 In the end, the filmmaker is using The Stranger to affirm his belief in the human spirit and in the benefits of trusting and accepting one another. It serves as a fitting coda to a career, and also is a remarkable example of an artist remaining sharp even in his final days. It's so easy to get hung up on the first declaration of an individual voice, to embrace what is fresh and new, but there is something far more rewarding in a mature work by a seasoned professional who has refined those earlier impulses into a far deeper, more meaningful expression.

In the year following The Stranger, Satyajit Ray received an honorary lifetime achievement Oscar, and then shortly after that, passed away. The Stranger is a respectable final statement, going along with that last seal of approval from Ray's peers and admirers. It is a tale of a man whose years only exist in the stories he tells. What we know of the artist, we know through his work, and the work of Satyajit Ray carries on even though the man is gone. 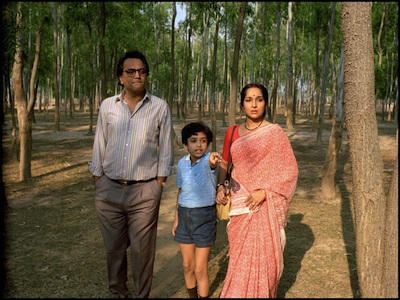