I am packing to head up to Seattle for this year's Emerald City Comic Con. Joëlle Jones and I have a table at the show, #H-11.

We will be selling books, and Joëlle has her vintage ad prints. She will also be doing black-and-white sketches.

I'll also have promo cards for my new project launching at the end of April. I am already teasing about it on the site dedicated to the material. Bookmark it!

To whet your appetite, check out this awesome Contempt-era Brigitte Bardot she did as a commission recently. 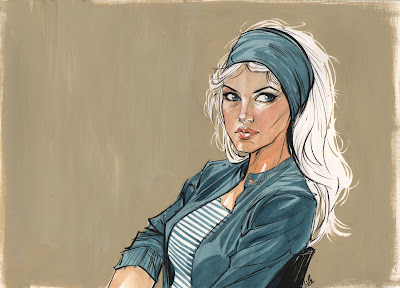 Note that we'll also be part of the evening programming on Friday night.

The Not So Late Late Show with Oni PressRoom: 2ABTime: 7:00 - 8:00Join Oni Press’ marketing guru Cory Casoni for an exciting new adventure in comicon programming: a live comic book talk show! It’s just like the gabfests you see on TV, but with people talking about nerdy stuff you actually love! Cory’s guests at this inaugural event include Scott Pilgrim creator Bryan Lee O’Malley and the creative team behind Tiny Kitten Teeth, Becky and Frank. Featuring fake baking with House of Night artist Joëlle Jones, special musical guest Delta!Bravo, and a whole lot of comedy... some of it intentional.


I look forward to meeting some of you.

And when I get back, I'll be writing about that new David Lean/Noel Coward set...