This review originally written for DVDTalk.com in 2007 as part of a film noir boxed set. 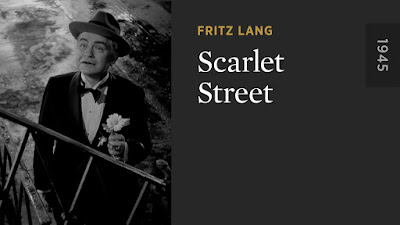 Fritz Lang practically invented showing the perils of a guilty conscience on film when he made M [review] in Germany fourteen years earlier; 1945's Scarlet Street continues this obsession with the evil that men do, casting Edward G. Robinson as the meek bank teller Christopher "Chris" Cross. This man's existence is a full-fledged illustration of the phrase "a life of quiet desperation." Married to a shrew of a wife who keeps a painting of her dead husband hanging up in their living room and doling out cash day in and day out while having none of his own, Chris' only solace is in the humble paintings he does in his spare time.

Then one night he happens upon a pimp (Dan Duryea, Black Angel) beating on his girl, Kitty (Joan Bennett, The Reckless Moment). Cross steps in, ingratiating himself to the girl and unwittingly getting pulled into a long con. She convinces him to set her up in an apartment where he can paint, and not wanting to tell her he's a nobody, he steals money to pay for it. She strings him along, eventually passing off his art as her own and sucking him deep into a tangled web of deceit that he can only see one way out of. 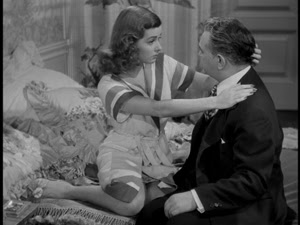 Lang and the main cast had first teamed up the year before in another classic noir, The Woman in the Window, and they clearly had something going together. Robinson is incredible as the shy and broken banker, showing great restraint and pathos. Duryea is a dirty lout that just oozes scum, and Joan Bennett is perhaps best of all, playing a woman who uses her sexuality to get what she wants but also showing how unsophisticated she really is. On her first night out with Cross, she orders a Rum Collins and drinks it with a straw, letting it dangle from her mouth as she talks. Cross is attracted to her as an old man looking at a woman whose childishness he mistakes for freedom.

The plot of Scarlet Street is full of twists, but it's also brimming with cynicism. In this bent love triangle, no one is innocent, and thus no one escapes punishment. Yet, even beyond the core characters, the people in Cross' life are no more innocent, taking full advantage of the man's nature, sometimes right out in the open, but also with tactics as underhanded as Kitty's. It's just that they have the approval of society to do it, and it's no wonder that a man would break when the world has made it okay to hold him down. 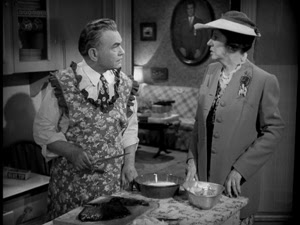