I reviewed this movie twice for DVD Talk. Both pieces appear below. 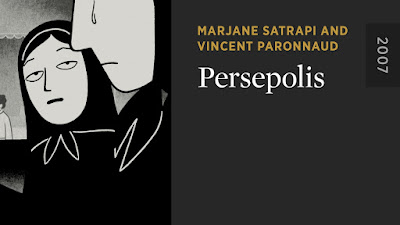 The new animated film Persepolis has a truly international pedigree. The French-made feature is an adaptation of a two-part comic book memoir by an Iranian ex-pat, Marjane Satrapi, and though her story is framed by a sequence set in a French airport, the main feature takes us from Iran to Vienna and back to Iran again, before the young artist leaves the country of her birth once and for all.

Persepolis takes place mainly in the late 1970s and 1980s. Young Marjane (voiced by Gabrielle Lopes) is an imaginative child who loves Bruce Lee and American pop music. She is inquisitive and rambunctious, as children often are, and she is also a witness to history. In 1977, Iran went through a cultural and political revolution, and being born to politically minded parents, Marjane is in a unique position to hear all about what is behind the various factions that have a stranglehold on her country. Her uncle, in particular, tells her much about the history of Iran's conflict. He is a political dissident who has only recently been released from a long prison sentence he served for being a communist. He gently tells her vivid stories of his struggles, inspiring the young girl's rebellious spirit, the very thing that may ultimately contribute to her own loss of innocence. 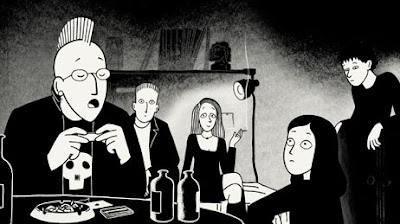 Once the revolution turns sour and the hardline Islamists take control of the country, things get gradually worse for the citizens of Iran. The country's women, in particular, lose more and more of their rights. Eventually, Marjane's parents send the now-teenage girl (voiced by Chiara Mastroianni) to Vienna, but Europe doesn't turn out to be a friendly paradise either. This disastrous tenure abroad wasn't the girl's idea anyway. Like the rest of her family, she is a patriot, and she loves her homeland--but even upon returning, she is forced to accept that her vision of Iran may never be possible.

Marjane Satrapi's story is one that provides rare insight into a country we don't get accurate portrayals of very often. It could also be an overly charged, issue-driven story if she had chosen to make it so, but instead Satrapi has tied her own personal journey from child to woman to the story about the changes that went on all around her. First in the comic book and now in this animated movie, which she co-wrote and co-directed with Vincent Paronnaud, Satrapi has shown how the struggles of a country and of the individual within that country go hand in hand. In addition to her exploring identity issues, we also see the various romantic travails that define her as a woman. There is no great difference between the hope of love dashed on the rocks and the hope of a better tomorrow smashing face first into fascism. That Satrapi manages to maintain her wit and see the humor in personal foibles keeps Persepolis from getting too heavy, while the storyteller's ability to sometimes step back and let events speak for themselves ensures that the overall meaning of the piece doesn't lose its importance. 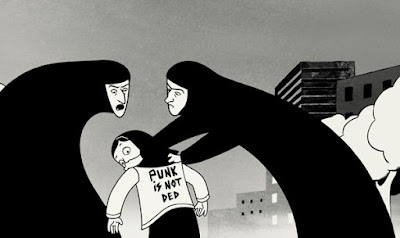 Persepolis is the best kind of literary adaptation. The movie maintains the look and feel of the original comic book while still making the material work in an entirely new medium. The appeal of the Persepolis books (recently collected as one definitive volume) came from their conversational tone, and the comic book medium was well suited to show the imaginative nuances of a child's questions about the world. Thus, a cartoon was the ideal choice for bringing such a work into theatres.

The animators manage to create a style that both mimics Satrapi's original drawings while also improving on them. Personally, I didn't care all that much for her cartooning in the book. Though Satrapi's linework has an individual flare, it struck me as somewhat amateurish. The drawing style in the movie takes her primitive, blobby illustrations and slicks them up, giving them movement and vitality. It still looks just like her work, but now better drawn. 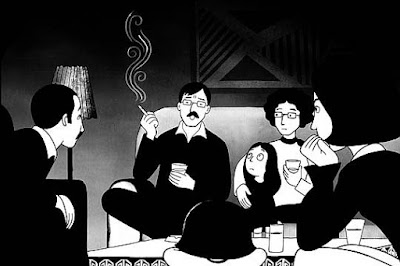 Plus, they aren't afraid to take advantage of the fact that Persepolis is a cartoon. Sure, the subject of the story can be rather serious and this is a movie made with older audiences in mind, but that doesn't mean the filmmakers need to wear a stuffed shirt to the party. Concocting an appealing black-and-white style and employing old cinema techniques like iris fades and flickering edges, they evoke a feeling of nostalgia for early Silly Symphonies [review] and silent film. They also use traditional Iranian art styles to keep the history Young Marjane learns about her country from dragging down the forward motion of the story. It is a great example of craft and material walking hand in hand. The artists exaggerate the line drawings when necessary and use dark and shadow to convey the doom and foreboding that gripped Iran in Satrapi's youth. She and Paronnaud also know when to keep it simple, such as the many conversations between the girl and her much wiser grandmother (Danielle Darrieux). If it weren't for the rather corny "Eye of the Tiger" sequence in the final third, I'd be inclined to call Persepolis a note-perfect film.

So, forget preconceived notions that might leave Persepolis off your viewing list. Forget any prejudice about cartoons, black-and-white film, or subtitles. Persepolis is one of the best movies of the year, and missing it would be to deprive yourself of something you really shouldn't do without. 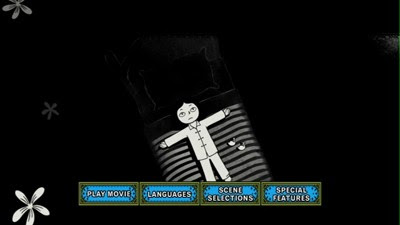 Persepolis was one of the major indie success stories of 2008. Produced in France, it was adapted from two comic book memoirs by Marjane Satrapi, an Iranian immigrant who moved to Europe in her early 20s. Co-directed by the author and Vincent Paronnaud, the black-and-white animated movie successfully took the crude drawings and personal storytelling of the comics and transferred them to the movie screen, making a story that was surprisingly evocative of the books while also being dazzling cinema.

The story of Persepolis is really a story about being stuck between two worlds--between Iran and Europe, personal belief and mandated zealotry, the freedom of childhood and the burden of being an adult, escapist fantasy and harsh reality, the realistic falseness of cartoons and the synthetic realness of memoir. In the only color sequences in the film, the "present day" of the story sees Satrapi (voiced by Chiara Mastroianni) in an airport, trying to decide whether to leave France and return home to Iran after many years in exile. She is stuck by her indecision in a massive construct that is literally everywhere and nowhere. An airport can be a portal to any place you want to go, but really, you feel like you're not standing on any particular country's soil. 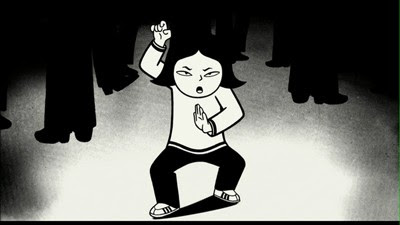 The narrative the shifts to the late 1970s when Marjane is just a child, unaware of the turmoil her country is heading for. Her heroic uncle (Francois Jerosme) teaches her about the history of Iran and her family, but the little girl would rather see Bruce Lee and Godzilla movies and listen to Iron Maiden than fight a revolution. The Satrapi parents (Simon Abkarian and Catherine Deneuve) are intelligent liberals who want to work toward effecting change, and Marjane's grandmother (Danielle Darrieux) is the voice of wisdom, having seen it all before. Worried that Marjane can't have a life if she stays in Iran, they send her to Austria as a teenager. In one of the most poignant twists in the story, however, the Europeans are just as intolerant and closed-minded as the fundamentalists who are vying for power back home. Wherever you are in the world, people can be small. Judge not lest you be judged.

This excursion rattles the girl, and she returns home for one last try. Here, though, she becomes a woman, having to find her way out of her funk and figure out where she belongs and what she desires. A disastrous marriage and some close calls with religious leaders finally send her away again, never to return. That is, unless she decides to get on that plane. 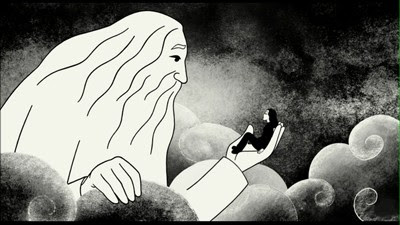 Persepolis is alive with virtuoso storytelling. While the script is so good it could have been told in any medium, the choice to animate this feature not only preserves the artistic feel of the comic book, but it provides Satrapi and Paronnaud a visual fluidity they might not have had otherwise. They make the most of the possibilities of animation, showing the world through young Marjane's eyes, bringing her daydreams and nightmares to life, and employing techniques out of Iranian folk art and early classic cartoons. Judgmental old women turn into snake-like creatures, their necks stretching to swirl around Marjane to interrogate her, their black robes filling the entire scene. Grisly visions of war are drawn using bold lines and invasive perspective, like a Russian propaganda poster, while scenes of death are often shown in a distance, framed in an iris, like a dark pageant. These are all methods that could be construed as pretentious or showy in live action, but that feel natural in animation.

That said, the greatest strength of the movie is the same as all of Marjane Satrapi's comics: the humanity of her writing. Drawn or not drawn, Persepolis is a story about people. Sure, a curtain is peeled back and we are allowed a glimpse into a culture and a country that is not our own, but in doing so, Satrapi is showing us how borders don't really make us all that different. We all have the same concerns, fears, and dreams. We may come from two different worlds, but we're still on the same planet. 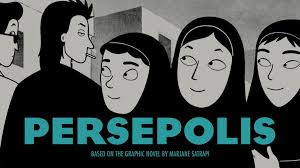 Their team was not diligent in sending updates. Their team consistently asked for money before not providing work. They provided some page designs,
experience design firms were quickly taken offline. It was a failed project.