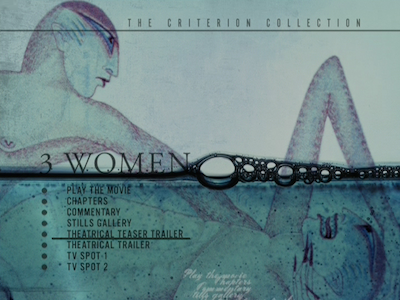 “I’m trying to reach toward a picture that’s totally emotional--not narrative or intellectual--where an audience walks out and they can’t say anything about it except what they feel.”

Robert Altman’s description of his intentions with 3 Women doesn’t really decode the entire thing, but it does give a key to opening up whatever secret book holds the answers. Because 3 Women, which Altman wrote and produced under his own Lion’s Gate banner as well as directed, is not a story that works on paper, it’s not a script with a traditional plot. Its act breaks are more like psychotic breaks, in that the movie transforms twice, shifting when its main characters face trauma, swapping their roles, and yet never stopping to explain. Altman is clear in his nod here to Luis Bunuel, naming a pushy boss Mrs. Bunweill as tribute, and interestingly enough, holds much in common with the movie the Spanish filmmaker released that same year. 1977 brought us both 3 Women and That Obscure Object of Desire. In Bunuel’s film, the lead actress changes mid-way through the picture, a confounding narrative conceit that demands the audience take a leap of faith that it all means something. Altman plays a few parlor tricks of his own. Both these men were driving down Mulholland Dr.

a couple of decades before David Lynch. 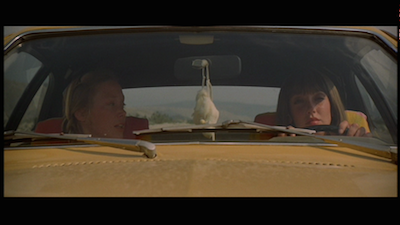 The story here begins normally enough. A young woman named Pinky Rose (Sissy Spacek) is starting work at a nursing home, and she is assigned Millie Lammoreaux (Shelley Duvall) to train her. The two couldn’t be more different. Millie is tall and composed; Pinky is small and shy. Millie talks constantly, yet no one ever seems to listen; Pinky is always watching, yet others often don’t see her. Millie pretends to be the sophisticate; Pinky is a child. Millie likes dressing in yellow; Pinky is nicknamed Pinky for a reason.

Pinky is also somewhat of a mimic. An emotional and physical chameleon. She is drawn to Millie and soon begins copying her. She borrows a phrase here, a detail there. When Millie needs a new roommate, Pinky seizes on the opportunity. What better way to observe her new obsession than in her natural habitat? It’s like Single White Female

for the art house, but without the murderous intent. 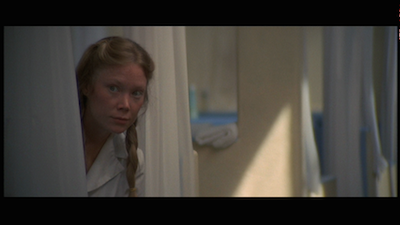 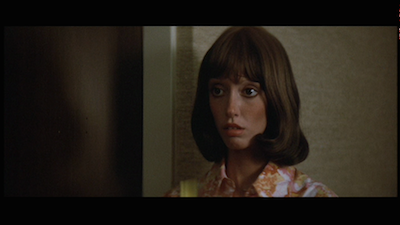 Things are up-and-down for the new roomies. Millie notices things being slightly off about the younger woman. Likewise, the landlord’s wife and proprietress of the saloon where Millie drinks, the similarly named Willie (Janice Rule), appears suspicious of the new girl. I suppose in this pyramid, Willie is the crone, and indeed, she and her elaborate paintings have a kind of bewitching effect on Pinky, drawing her in the way the moon draws the tide. The spying girl often observes Willie through water, or in relation to water, like in a fish tank or at the bottom of an empty pool, and every time, Willie can sense the staring almost immediately. 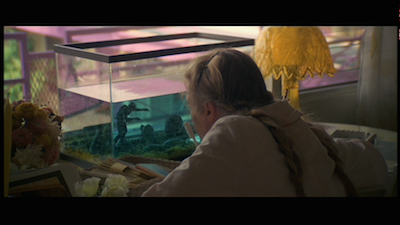 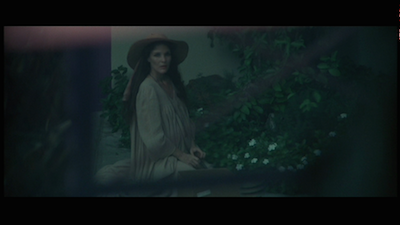 Altman makes great use of the murals that Willie paints (though in reality they were created by artist Bodhi Wind). She does small abstract work that can be hung on walls, though those she tends to riddle with bullet holes, which only calls further attention to their humble size. Her masterpieces, on the other hand, are large and impressive, covering walls or the floors of swimming pools. She depicts mythic creatures, alien and surreal, masculine and violent. In one, which also ends up being the final image of the movie, her bizarre creatures rant and rave at an object in the heavens, suggesting they are as primal as the apes at the start of 2001 [review]. One can presume she is painting the world she sees around her--the saloon is populated by men riding dirt bikes and shooting pistols--but maybe she also feels that desperate pull herself.

Everythng changes midway through 3 Women. In a surprising twist--though not really a spoilery one, it would be sort of impossible to spoil a movie this unconcerned with conventional narrative--after Millie turns on her, Pinky tries to drown herself. Feeling guilty, Millie stands by her while she is in a coma, only to find the girl who wakes up in that hospital bed is radically changed. Pinky is now the assertive one, and Millie can only do her best not to be completely subsumed, to have her entire identity swallowed. It takes another tragedy, this time involving Willie’s baby, to shake things up again. (Digression: It might be interesting to compare how Altman allows the birth to affect the lives of the main characters in a movie about women vs. how the birth scene at the end of his male mid-life crisis picture Dr. T and the Women [review] affects Richard Gere. Is there something to be said for why it is magical and liberating for the man and not for the ladies?) 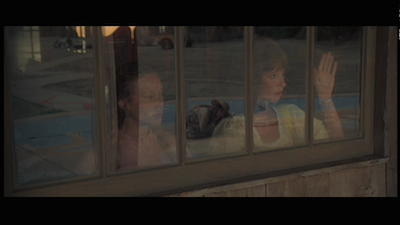 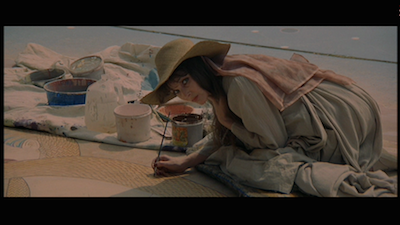 I briefly considered tracking my feelings throughout my viewing of 3 Women, but that seemed to kind of miss the point of the experiment by intellectualizing it too much. It would also pull me away from the screen and make me focus on the paper, and 3 Women requires undivided attention. That said, in the first half of the movie, there is definitely a feeling of desire and hope, but that translates to pity, as well--which is an audience reaction, not a function of the storytelling. Neither Pinky nor especially Millie are that self-aware. Later, I felt in sync with Millie, as Pinky’s attempted suicide and the fall-out thereafter inspires anxiety in both the viewer and the actress. Duvall is a fascinating onscreen presence. She almost doesn’t seem like that good of an actress. Her delivery can be flat, and she can appear ill at ease. Her gawkiness can be hypnotic, in much the same way her Margaret Keane-like features make her beautiful. I am always hyper aware she is Shelley Duvall, whether she’s playing the scared wife in The Shining

or Olive Oyl in Popeye

. Yet I find myself enjoying watching her all the same. 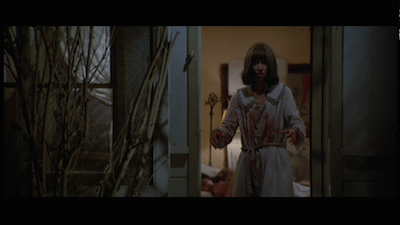 It’s a demeanor that is ideally suited for a movie as intentionally dreamy as 3 Women. Shelley Duvall is practically surreal unto herself. This makes it all the more smart to cast Sissy Spacek opposite her. Spacek is naturally more grounded. As Pinky, she maintains the girl-next-door vibe she had in Badlands [review] and Carrie

, and yet is utterly convincing when she becomes the more confident and mean of the two roommates. One could posit she’s putting the little-girl-lost routine to bed for good. Performance-wise, she is as natural on screen as Duvall is awkward. I would almost try to argue that all of 3 Women is Millie’s dream, given how menacing a figure her counterpart becomes, but the changes occur in Pinky’s vision. She observes, she sees the rifts, and she dives into them. 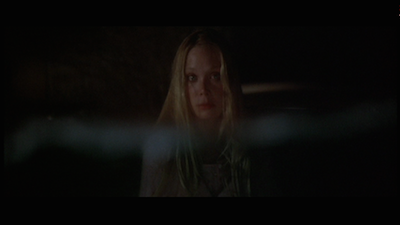 Altman approaches all this with a measured gaze. He doesn’t push the odd happenings too hard, he doesn’t go all wonky or psychedelic. Pinky’s early “visions” are more practical. The first superimposition of waves over the image, for instance, uses water that is actually in the scene. It’s only near the end that Altman steps away from this, indulging in one short yet meaningful dream sequence, a kind of quick run through the greatest hits of everything we’ve seen so far. He’s practically working at odds with his own skewed motives here. 3 Women deals with strange events, but Altman makes most of it seem as real as possible. Even the obvious symbols, like the pair of twins that work with Millie and Pinky, are really just twins who work with Millie and Pinky. Though, they do allow for some leading dialogue. “Do you think they know which one they are?” Pinky asks. “Maybe they switch back and forth.” 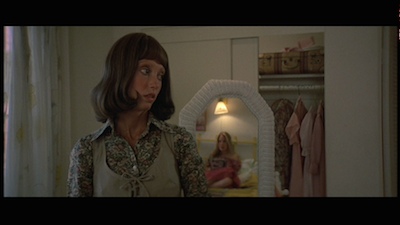 This earthiness and lack of show makes it easier to go along with the more obtuse occurrences, just as Gerald Busby’s distant and ominous music provides a throughline in the sometimes rambling narrative. Altman is far from indulgent, he’s giving the audience as much as required to keep them invested and on track. It’s only in the final scenes, when the lever on the cinematic slot machine is pulled one last time and the titular trio of women slides into its final roles, that some might end up truly confounded. I’ve seen the movie twice now and I’m still not sure if it’s a jackpot of “Ah-ha!” or otherwise some combination of “what’s that?” and “why this?”

I like it anyway. I am fascinated and enraptured, hypnotized by its vibrant colors the way Pinky is hypnotized by Willie’s paintings, every time I watch it. And I don’t worry about what is happening or what it’s trying to say. Which would mean Altman is successful in creating an all-in experience, one that entices and teases and provokes even if it never explains. Note: 3 Women will be playing the NW Film Center on Sunday, January 18, as part of a Robert Altman weekend.