"There ain't no difference between a flying saucer and a time machine," says one character in Repo Man, Alex Cox's 1984 punk rock comedy.

"I don't want no commies in my car. No Christians either!" declares another.

The nouns are different, but the sentiments are the same. One crazy concept deserves another. When man has gone this nuts, all nutty ideas are created equal. 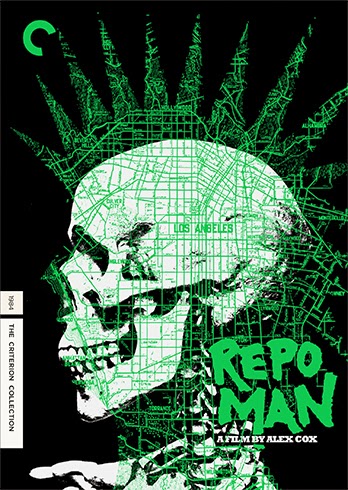 It's too bad that Criterion couldn't release Repo Man to the collection just after Robert Aldrich's Kiss Me Deadly, and then maybe followed it with Quentin Tarantino's Pulp Fiction

, giving us three consecutive spine numbers with mysterious glowing objects under the lid, each representing some kind of metaphor for man's dissatisfaction with the current state of being. Well, okay, I'm not sure we can take the briefcase in Tarantino's film that far, but he clearly watched Alex Cox movies back at the video store. In Repo Man, there are alien corpses thawing out in the back of a Chevy Malibu, incinerating all who look upon them. In Aldrich, our doom was the nuclear bomb mankind created to obliterate himself; in Tarantino, it's possibly the manifestation of spirituality and evil, hence the 666 combination lock; for Cox, it's the doom from beyond, a higher form come to show us what a pathetic race of meatbags we really are. 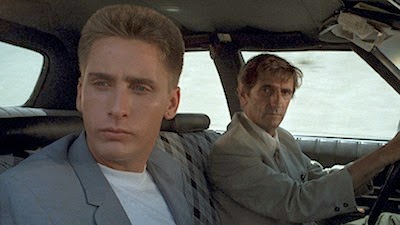 Emilio Estevez stars as Otto, a punker in Los Angeles who doesn't fit into the generic culture that permeates 1980s America. At the start of the picture, he works in a grocery store that deals exclusively in generic, plain-wrap food. It's a good sight gag but also one based in reality. At the time, the Ralph's supermarket chain had its own brand that was just white packaging with a blue stripe and the name of the product printed on top. Public Image Limited lampooned it with their album that was, well, called Album

if you bought the record, and Cassette if you bought the tape. It had the hit song "Rise," about a social misfit who can't take it anymore. "Anger is an energy," John Lydon chants--and it could have just as easily been a motto for Otto. He gets fired from his job for refusing to stack the plain cans spaced equally apart. Uniformity is treason.

It's on his way home after being canned that Otto meets Bud (Harry Dean Stanton), a repo man who tricks Otto into helping him repossess a car. As payment, Bud takes the kid under his wing and teaches him the rules of the game. It's not so much a veteran of the system taking in the disaffected youth and corrupting him into selling out, but rather a veteran outlaw who himself exists somewhere outside the system while helping perpetuate and enforce it. The repo men are a little bit like the gang that couldn't shoot straight, and Cox's film has its roots in the western as much as anything else, even if there is some rejection of the tradition, i.e. "John Wayne is a fag." But that's anarchy for you. The cowboy frontier was about establishing your own code of conduct because civilization's laws were too stifling. 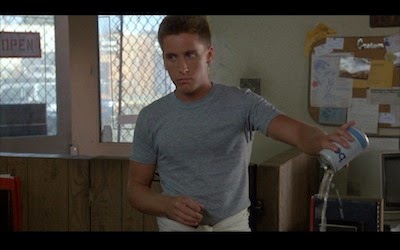 So it is here. Otto can continue to pursue nihilism for no good purpose, or he can find one. Given the way life was going under Reagan, that purpose is selfish at first, but the deeper Otto gets into this new life, he becomes exposed to the true extremes of society. One one hand, there is the CIA looking to squash radical ideas; on the other hand, the trio of mohawked, shaved-head crooks robbing liquor stores. At some point all these forces want the same thing: the Chevy Malibu and the secrets locked inside. 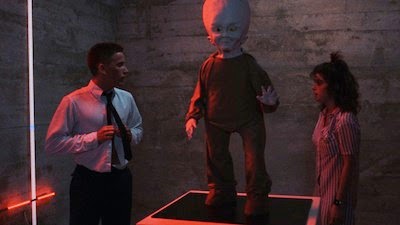 Repo Man's crazy theories are an amalgamation of the weirdness of the 1980s. Stagnant culture forced people to go searching for solutions that were beyond the norm. Whether it was believing in aliens or Scientology (here parodied as "Diaretics"), or jumping into a musical subculture, or living by a code in a secret society, everyone was looking for something. Cox's credo about UFOs and time machines, communists and Christians, was his dismissal of all such pursuits as being one and the same. In the kingdom of the blind, the one-eyed man is king. In this case, literally, he's the lobotomized driver trafficking in extraterrestrial corpses. Sure, he's got some wacky ideas. So does Miller (Tracey Walter), the one who equates spaceships and time travel. Considering where they both end up, they prove that just because you're paranoid, it doesn't mean they're not after you. 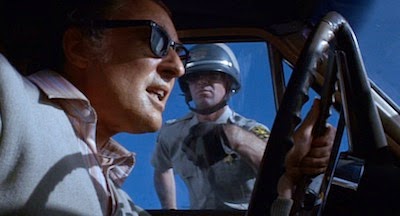 Though he goes with Miller in the end, Otto doesn't so much join the crazies as he rejects the ways of thinking that make him a part of the herd. The key scene is really in the shoot-out at the liquor store, the showdown between three aspects of Otto's life. In a standoff that must have given a young Q.T. many a good idea, it's a three-way battle between Otto's straight life (the security guard that escorted him out of the grocery store), his punk roots (the robbers, his former friends), and his newer career (Bud). Not only is he the only one who really walks away, but he does so by drawing an individualistic line in the sand. As his old buddy dies, he says, "Society made me who I am," to which Otto replies, "No, it didn't. You're a white suburban punk. Just like me." It's a defiant rejection of anything that would otherwise attempt to define you. Otto is his own man, and like Pablo Picasso, no one calls him an asshole. 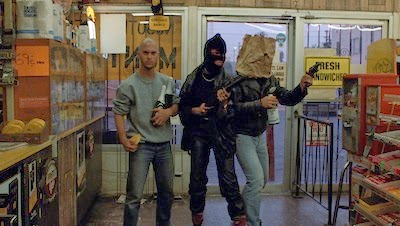 By all accounts, so is Alex Cox, and Repo Man is certainly its own movie. In all honesty, for as much meaning as I could sift out of it, I didn't find it to be an entirely satisfying viewing experience, not the way I did when I saw it all the way back in high school. The gonzo, anything-goes quality of the narrative that made it feel fresh and uninhibited thirty years ago just seems messy now. Cox doesn't quite know how to resolve all the criss-crossing story lines, instead letting the episodic storytelling pile on itself in one massive jumble. He also never finds a consistent tone for the humor. The biting satire gives way to ridiculous slapstick and an occasional meanness.


Still, Estevez and Stanton both give excellent performances, and the music is pretty good. Plus, you have to admire any film that dares to give a two-finger homage to Grease

, stealing the musical's ending for its own purposes. Of all the punk rock stylings Cox adopts, that may be the most punk of all. 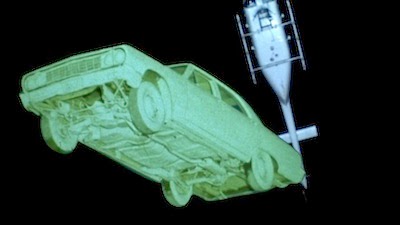 Just watched this last week for the first time in 25 years - enjoyed it more then (there are quotes I still say to this day from this film) but it was interesting to pay attention to the actual filmmaking and the film as whole and I agree with your thoughts in the next to last paragraph.