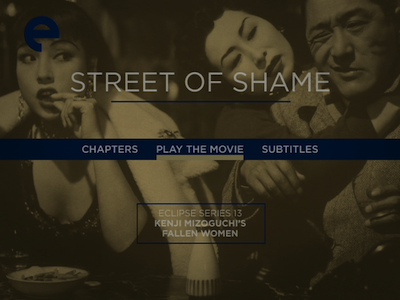 The final movie in Eclipse's Kenji Mizoguchi's Lost Women also turned out to be the last film the director made. 1956's Street of Shame not only shows how far Mizoguchi has come as a cinematic storyteller, but it provides a fitting finish for the thematic arc that he began with Osaka Elegy [review] in 1936.

Street of Shame is set in Tokyo's red-light district. The effects of the war that we saw in Women of the Streets [review] are still felt, particularly when the women in the film travel away from the cathouse. Much of Tokyo and the surrounding countryside have yet to be rebuilt, and at least for this pocket of society, the men have yet to reclaim their dominance, if they are around at all. Efforts to clean up the rubble, both literally and morally, are gaining traction, but there is also resistance. There is an anti-prostitution law that keeps threatening to pass, and it looms over the characters for the length of Street of Shame. If the profession is outlawed, what will the women do for income? 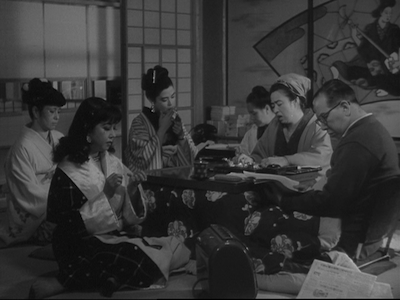 There are five primary women whom we follow in the film. There is the old guard, and the younger prostitutes. The older women mostly work in service to their family. Yumeko (Aiko Mimasu) has been at it the longest; her husband died twenty years ago and she's been working in the brothel to make money to raise their son. On the same front, the plain Hanae (Michiyo Kogure, Drunken Angel [review]) has taken up the profession because her husband suffers from an unnamed illness (it appears to be largely mental), and they have a baby to feed. There is also Yorie (Hiroko Machida), who dreams of leaving the job to get married. Her failed efforts serve as a cautionary tale to the others. For as rough as life is inside the salon, the women who work there have long since become accustomed to it; things are different outside their neighborhood. Change where you live, and you'll get a whole new set of problems. 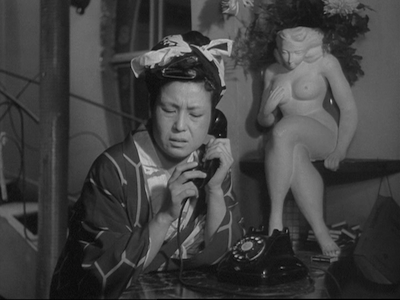 While the older women appear to do what they do for others' sakes, the younger generation has taken to this work for themselves. The beautiful and calculating Yasumi (Ayako Wakao, Floating Weeds) was left with no alternative when her father was arrested for embezzlement. She carries on the family business, loan sharking on the side, and eventually conning her way into a larger payoff. Yasumi has found a way to take care of herself. She is a survivor, a predator rather than prey.

Mickey shows up at the start of the movie, a new hire at the house. Played by Machiko Kyo (Rashomon, and also Floating Weeds), Mickey strikes a more modern figure. She is curvaceous and dresses like American movie stars. Like the bad girls in Women of the Streets, she embraces the lifestyle of a juvenile delinquent, and she gets by taking what she wants and manipulating whom she can. When she steals Yorie's best client, it creates a direct clash between the generations. She represents a new cynicism, dispensing with pessimistic wisdom as if it was just practical. When her father comes looking for her, however, we learn that much of her self-possession is born of difficulty and pain. 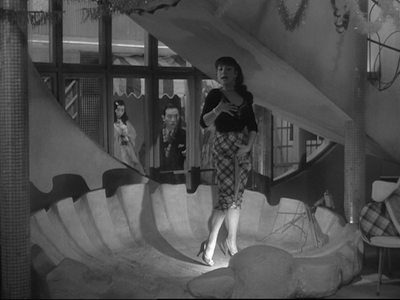 Writer Masashige Nakamura, working from a novel by Yoshiko Shibaki, builds Street of Shame as a multi-faceted drama, giving each individual woman her own screen time. The narrative structure is almost like a series of interconnected vignettes. There are Yorie's attempts to leave, and Hanae's difficulties keeping her husband from going under, alongside Yasumi's long con and Yumeko trying to reconnect with her son. The latter two storylines have the most satisfying set-ups and conclusions. Those two women end up somewhere different at the end of Street of Shame, one better and one worse off than she started, while their co-workers struggle only to stay in place. Mickey in particular gets no real change at all. She is the unwavering center, the one who will always be, regardless of the debates of politicians and moral arbiters. Mizoguchi has been telling Mickey's story for twenty years. She and the girls like her are not going anywhere. 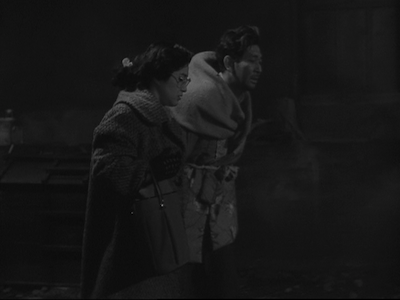 There is no more tragic evidence of this than the final scenes of Street of Shame, when a first-timer is tarted up and trotted out in hopes of selling her virginity for a premium. The girl is frightened and sad, but her fate is sealed. Her coalminer father can't work, she has to do something. She stands as an open-ended answer to the uncomfortable question that comes up more than once during Street of Shame. Every time the prohibitive law is raised once more, the owner of the brothel uses scare tactics on his employees. "If they take this away," he asks, "what will you do?" He acts as if he is doing them a service, but his fear mongering ends up being self-condemning. The man bullies them as if they can do anything about the law, which of course they can't. He can panic them as much or as little as he wants, it doesn't matter: their fates are sealed. 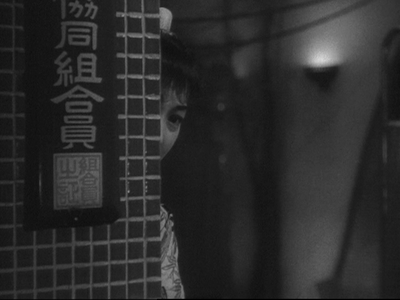 This may be the one depressing thing about Kenji Mizoguchi's Lost Women. The difficult subject matter Mizoguchi tackles never seems to get easier, the situations his characters endure never really get better. Yet, as his own skills improve, he does bring us closer to an understanding of who these women are and why they end up selling themselves. He turns our judgment to sympathy and then empathy. Street of Shame contains the most discomforting scene of all four movies, and sums up what Mizoguchi presents as the fundamental problem with how society treats ladies of the evening. When Yorie first leaves, Hanae's husband is overly eloquent in telling her to go and never come back. He says no one who works in a whorehouse is human. Mizoguchi frames this moment so that Hanae is in the shot, passively listening as her husband, who makes her life more difficult than anything, denigrates her and strips her of her dignity. She says nothing, because what can she say? Once again, a prostitute is run down by the one who benefits from her work the most. It's heartbreaking, and regardless of what else happens, ensures we, as an audience, will be on the side of the working women. After all, we have benefitted from their plight in our own way, we have watched their stories. In the long run, all an artist can do is move us, and through these four movies, Kenji Mizoguchi never failed in that regard. 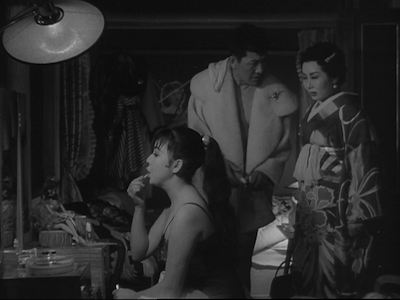