This review originally written for DVDTalk.com in 2007. 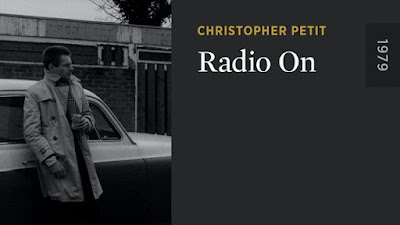 Christopher Petit's 1979 independent feature, Radio On, is a brittle portrait of the despair and ennui of 1970s Britain. Rather than indulge in chronicling any particular scene from the time or resort to the usual ripped-from-the-headlines tactics, Petit instead chooses to follow one man over the course of a few days as a portrayal of the feelings of hopelessness many were experiencing. With bleak black-and-white cinematography by Martin Schäfer, who regularly worked with Wim Wenders (one of the producers on the film), Radio On offers a Britain that is perpetually gray. Come, Armageddon, come.

Robert (David Beames) is an all-night DJ in a factory who spends his own boring nights trying to alleviate the tedium of workers on the graveyard shift. He sets aside their banal requests and plays his own choices in hopes of giving them "something better." When his brother mysteriously dies, Robert goes on a road trip to Bristol in search of answers about what happened. Only those aren't the answers he really wants. The questions that loom over him are more existential. Though he never says so out loud, Robert is really searching for some kind of meaning in his dull existence.

Along the way, he meets other people who have been set adrift. There is the Scottish soldier (Andrew Byatt) whose pain at losing his friend on a tour of duty in Ireland has left him emotionally crippled and defensive. Then there is the pair of German women, one who hates all men and the other who is trying to find her ex-husband and reclaim custody of their daughter. Like Robert, these people feel that something has been taken from them, that their life is absurd and pointless. As the grieving mother explains, she feels homesick in England, stranded in a world where no one speaks the language she was born into. For her it may be a literal language barrier, but she might as well be speaking metaphorically. Robert borrows her phrase book and tries out different sayings in both English and German, and she kindly corrects his pronunciation. It doesn't matter that they are saying the same things, the sound of it will never match up.

If there is anything that provides comfort in Radio On, it's music. The DVD box quite loudly trumpets the soundtrack, listing the bands and the songs featured. The tracks are so important, Petit even lists them in the opening credits, rather than sticking them at the end like we're used to. The chosen cuts fit perfectly, the disaffected tones of the music emerging from the ashes of punk echoing the disaffection of Petit's script. Featured here are David Bowie, Kraftwerk, Robert Fripp, Ian Dury, Lene Lovich, Devo, and more. Regardless of what Robert is doing, he always returns to the music, turning on the radio in the car or playing a jukebox in a diner. It comforts him, acts as a friend when he has no one else to share the moment with. 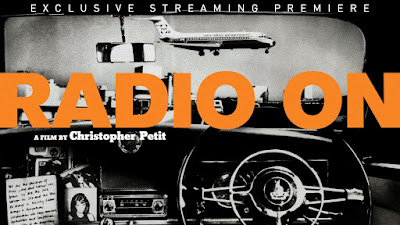 At the same time, music also provides a bridge between people. The last message Robert received from his brother was a birthday present of an envelope full of Kraftwerk tapes. On the road, when he meets Just Like Eddie (Sting) at a gas station, they find common ground by singing Eddie Cochran songs, whereas when the soldier rejects what Robert puts on the stereo, you know their relationship will quickly end.

Petit builds Radio On out of lengthy, languorous shots, letting the landscape pass without comment, the periods of time where there is no dialogue stretching as far as the patches of road traversed. Schäfer keeps his camera at a distance rather than going in for the traditional close-ups, favoring two-person shots over cutting back and forth in the rare conversations. The viewer is kept far enough away as to feel that he or she is on the outside looking in, not unlike how Robert feels. We're the foreigners in his existence. Robert may not be engaged in what is happening, but there is turmoil, poverty, and moral decay all around him. The same radio that provides him with music also delivers the news of society's ills. These problems don't touch him, but they contribute to the dread that permeates the air. 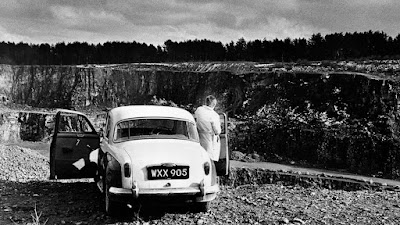 By the end of Radio On, Robert has driven as far as he can go--quite literally. Parked on the edge of a deep hole, his car dies. Rather than fight against it, he opens his car doors and cranks up the Kraftwerk, the last gift from his brother and the DJ's last gift to the world he knew. He walks away from the site and starts walking back toward civilization. What he will find there is the Rorschach test Petit gives to his audience. What do you see in the ill-defined shapes of Robert's future? Has he rediscovered hope, or does the final shot of a train departing mean it's too late, any chance for humanity has already left the station?